SOME NOVEL AND LITTLE-KNOWN ACCESSORIES (Oct, 1923) 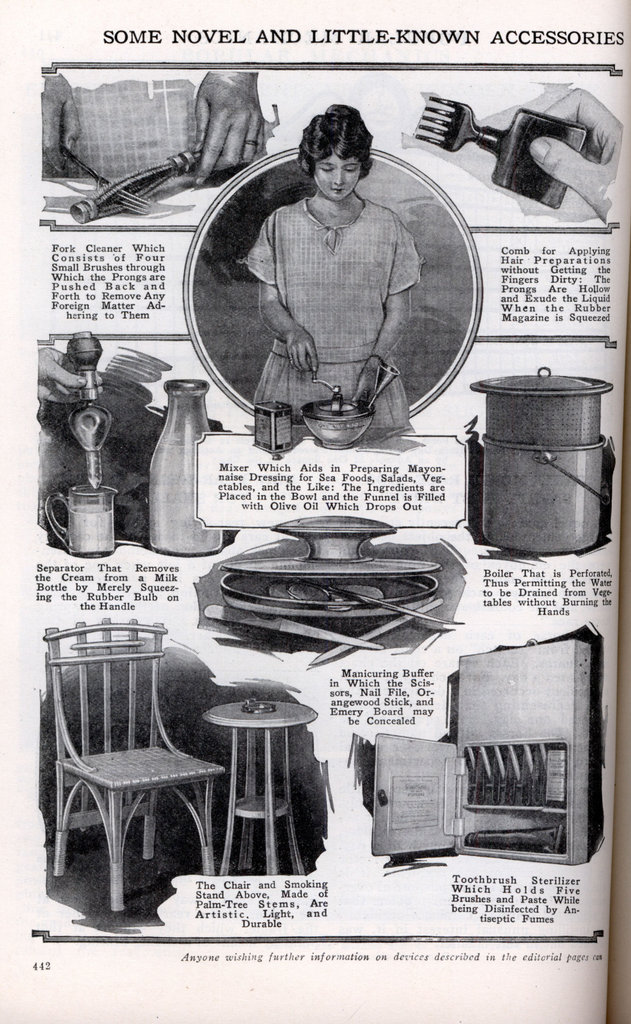 The Chair and Smoking Stand Above, Made of Palm-Tree Stems, Are Artistic, Light, and Durable Mixer Which Aids in Preparing Mayonnaise Dressing for Sea Foods, Salads, Vegetables, and the Like: The Ingredients are Placed in the Bowl and the Funnel is Filled with Olive Oil Which Drops Out

Manicuring Buffer in Which the Scissors, Nail File, Orangewood Stick, and Emery Board may be Concealed

Comb for Applying Hair Preparations without Getting the Fingers Dirty: The Prongs Are Hollow and Exude the Liquid When the Rubber Magazine is Squeezed

Boiler That is Perforated, Thus Permitting the Water to be Drained from Vegetables without Burning the Hands

This Knife Sharpener Consists of Two Stone Rollers, between Which the Blade is Drawn from the “Heel” to the “Toe,” Thus Producing a Very Keen Cutting Edge

Clothesline Reel with a Special Handle That Acts as a Brake, Preventing the Line from becoming Soiled

Electrical Marcel Waver Which Is So Simple to Operate That Any Woman may Quickly Learn to Wave Her Own Hair, Thus Saving the Expense of a Hairdresser: It is Claimed to Be Equally Effective on Dry or Oily Hair

Two Views of a Shade-Roller Hood Which Permits the Artistic Covering of the Shade-Roller Ends and Brackets, and Consequently Aids in Beautifying the Interior of the Home

Inflated Pillow for Motorists That Gives the Body an Even Balance at All Times, Thus Preventing Backache