Not quite sure why this requires such a huge speaker, or any speaker at all… 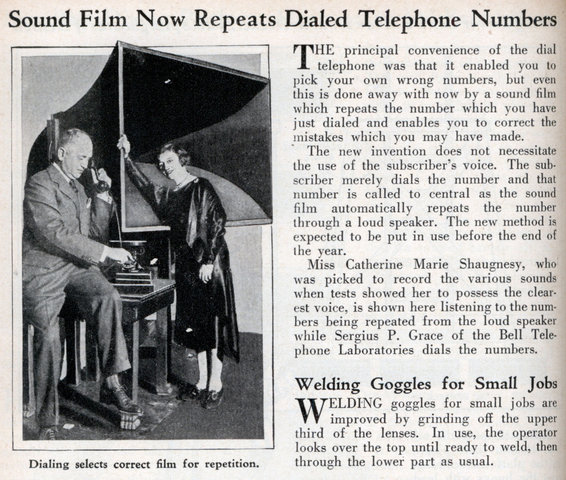 THE principal convenience of the dial telephone was that it enabled you to pick your own wrong numbers, but even this is done away with now by a sound film which repeats the number which you have just dialed and enables you to correct the mistakes which you may have made.

The new invention does not necessitate the use of the subscriber’s voice. The subscriber merely dials the number and that number is called to central as the sound film automatically repeats the number through a loud speaker. The new method is expected to be put in use before the end of the year.

Miss Catherine Marie Shaugnesy, who was picked to record the various sounds when tests showed her to possess the clearest voice, is shown here listening to the numbers being repeated from the loud speaker while Sergius P. Grace of the Bell Telephone Laboratories dials the numbers.