Turns out that there were two drawbacks to using wire.  Although playable today they had a tendency to tangle leading to breaks.  Second, due to the short period recorders were made the equipment to play them back is very rare according the this Library of Congress webpage. 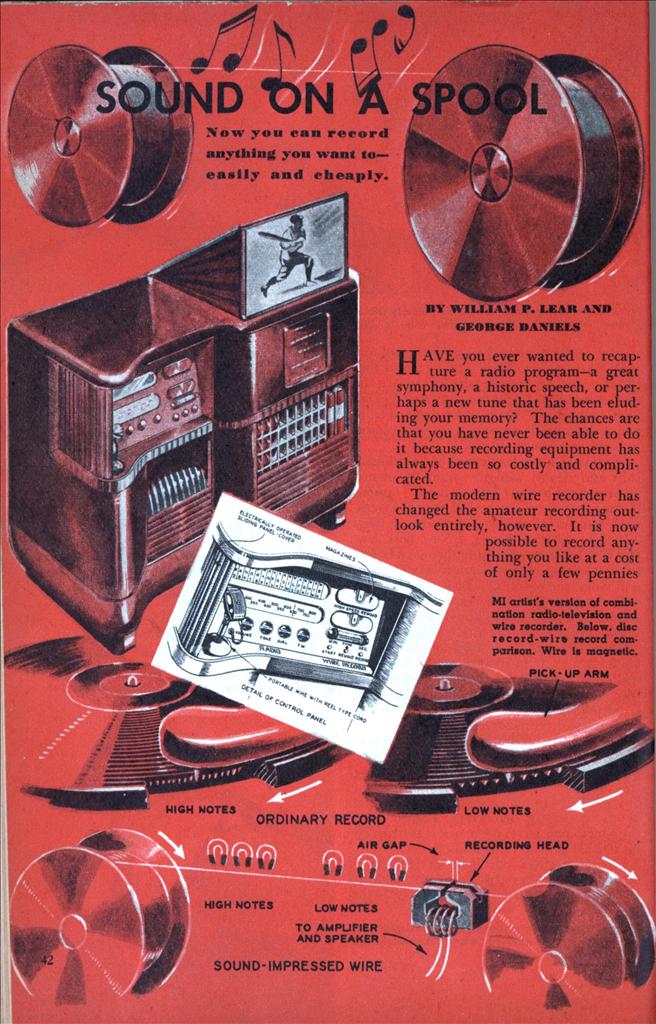 SOUND ON A SPOOL

Now you can record anything you want to— easily and cheaply.

HAVE you ever wanted to recapture a radio program—a great symphony, a historic speech, or perhaps a new tune that has been eluding your memory? The chances are that you have never been able to do it because recording equipment has always been so costly and complicated.

The modern wire recorder has changed the amateur recording outlook entirely, however. It is now possible to record anything you like at a cost of only a few pennies or a full hour’s recording.

Moreover, the recorder is so simple that a five year old child can operate it, or all you have to do to make a recording is push a button. Instead of a fragile disc, your record is a little spool of practically indestructible steel wire that never wears out no matter how many thousands of times you play it. You needn’t worry about needles wearing out because the wire recorder has no needle. The final touch to this seemingly unbelievable system is in the fact that you can entirely erase everything from a wire recording and use the same wire for any recording you happen to want—a million times over if you can find time enough. On the other hand, if you like what’s on the wire you can leave it there forever and play it for your grand- children in 1995. When civilian production begins, you’ll be able to buy a Lear wire recording attachment for your present radio without adding materially to the cost of the set. The units will be built on the basic principles of the present types designed for use on U.S. aircraft and U.S. ships to record vital information and orders. Tiny Lear Wire Recorders, smaller than a portable typewriter can be made to record the aircraft pilots’ verbal description of observations while in flight as well as those of the crew, eliminating the need for making long and tiring reports after an exhausting flight. The mystery might have been stripped from fatal commercial crashes in the past had the pilot been able to record a few words on such a machine, for a spool of recording wire will survive an airplane crash that demolishes the entire ship.

The hitherto impossible feats that are everyday performance for a wire recorder often create the impression that wire recording is some form of weird electronic wizardry beyond the average understanding. The exact opposite is true, however. Wire recording is so simple that it’s practically foolproof when the equipment is properly designed and properly built. As the magnetic recording idea was originated almost 50 years ago by a Danish scientist named Valdemar Poulsen, there is nothing exclusive about the basic idea, and anybody can produce some form of wire recorder if he knows how. Competition will be based largely on “knowhow” and on the perfection and refinement of wire recorder design.

After years of experiment and development, the Lear Wire Recorder can be made small enough to carry in a woman’s handbag or in a briefcase. The busy secretary can take home a recording of the day’s dictation and type it up on a portable while lolling on the sofa sipping a highball.

The wire recordings are easily carried as they are permanently encased in small, rectangular cartridges that snap in place on the recorder for playing or recording. These cartridges correspond to the records used in disc recording. Each cartridge contains a full hour’s recording, however.

Ordinary magnetism provides the basis for wire recording. When you speak or play the piano before the microphone of your wire recorder, the sound is converted by the microphone into electrical impulses. These impulses are amplified by the circuit of your radio or amplifying unit, and sent to the recording head. The recording head consists of a modified electromagnet over which the easily magnetized steel recording wire passes from one spool to the other at a steady speed. Each vibration of your voice that strikes the microphone causes the magnetization of a tiny portion of the recording wire as the wire moves p^st the recording head. These vibration-caused magnetic variations along the wire vary in frequency and in amount according to the pitch and volume of the sounds being recorded, in much the same manner that indentations vary along the grooves of a disk record. The wire, of course, has no indentations in it; only the magnetic impressions which cannot be seen, as the wire undergoes no physical change.

After the magnetic recording is made, the wire is quickly rewound on the first spool, as the wire must travel in the same direction for both recording and playing. If you turn the speaker on during the rewinding process you can have the thrill of hearing yourself talk backwards.

The same amplifier is used both for recording and for playing. Merely pushing a button marked “Play” switches off the microphone and switches on the speaker. The recording head then acts as a sound pickup and serves much the same purpose as the needle and pickup arm on a disk record player.

Each magnetic variation of the wire generates a minute electrical impulse as it parses the coils of the combination recorder-playback head.

These impulses are amplified by the amplifying circuit of your radio, and then go to the speaker.

The process is instantaneous, of course. Volume is controlled in the usual way by means of a control knob.

The wire recorder can record anything your microphone can pick up, and reproduce anything your speaker can handle. It is not restricted by the limitations of mechanical recording as the recording process is purely electromagnetic. And you needn’t worry about the wire breaking. It is a special alloy developed by Lear engineers. Highly magnetic and corrosion resistant and of high tensile strength, the wire need never be actually handled by home recorder owners, since it will be encased in the cartridge. All recording, playing and erasing is done without removing the wire from its cartridge: Thousands of recordings and playbacks can be made with a single cartridge, erasing whenever a recording loses its appeal or value. If a number of separate recordings follow each other on a single cartridge, it is easily possible to replace any unwanted recording or recordings while allowing the others to remain.

The erasing process consists of passing a high frequency alternating current through a coil in the cartridge while the wire is passing through the coil. The process is entirely automatic. If, for example, you decide that you no longer want the recording that happens to be on the wire, you simply snap on the cartridge containing the unwanted recording, push the “record” button, and record whatever you choose to put on the wire in place of the original recording. Once you push the “record” button, and the wire starts to travel through the recording head, it must first pass through the eraser coil. This removes any previous recording from the wire before it reaches the recording head. No separate erasing step is necessary.

If you want to replace only one particular musical number or other portion of recording along the wire the procedure is simple. Play your wire recording until you come to the part you want to replace, and then switch from “play” to “record.” You can stop the recorder at that point if you like, and start recording the new number later at your leisure.

Should you want to clear the old recording from the wire and leave the wire blank, you merely switch off the microphone before pushing the “record” button.

Even though your wire recorder may be of the type that attaches to your radio you are not limited to recording radio programs. The new home recorders or recording attachments will be designed to record anything from a broadcast by the Philharmonic to a squabble at the bridge table or your baby’s first words. A simple attachment could enable the recorder to answer your telephone when you are not at home, and take any message the caller may want to leave. Recording spool cartridges for the tiny portable brief case type recorders and the large console types will probably be interchangeable so you can bring home whatever you recorded at the concert or the firemans’ dinner and play it whenever you feel like it.

As the portable recorders and players will operate in any position and despite vibration, it is a simple matter to carry several hours of continuous music and entertainment in your car or plane or boat. Instead of writing a letter to a friend who has a wire recorder you can send him a wire recording cartridge with up to an hour’s chatter on it. In the romantic vein, this should be far superior to the old fashioned love letter, as the sweet nothings can be recorded over a violin background, and mailed like a box of candy.

Practically speaking, there are almost limitless applications for wire recording in any activity in which a record of activity must be kept or in which uninterrupted sound reproduction over considerable time is essential. The familiar juke box can be made capable of playing ten or twenty times as many different musical numbers and still be only a fraction of the usual size. In business the minutes of meetings can be kept easily and without the slightest chance of error. The same can be done in the case of courtroom testimony.

In the field of music, the wire recorder can be made to deliver all the quality of tone that any other recording system can deliver, and in many instances considerable superiority is attainable.

Music students can use the wire recorder to find errors in their technique or bring samples of their work to their teachers. The inferior piano student need never feel ill at ease in the presence of his teacher or his fellow students if he owns a portable wire recorder. He can crib electronically by taking his recorder to a concert by Jose Iturbi and then proudly playing off the result as his own accomplishment.

Amateur sound movies, of course, are a simple matter with wire recording. An attachment for even the tiny miniature movie outfits can be light and trouble-free.

From the social and cultural standpoint, there’s an off chance that the modern wire recorder may tend to develop a soft spoken and polite world. When, for example, your roadster rips the running board from a passing truck, don’t expect the driver to trot out his most violent traffic jargon as he climbs down to examine the damage. That would be old fashioned. He’ll probably say something like, “Frightfully distressing collision, wasn’t it?”-—because he’ll know you’re recording his comments for the insurance adjustor.