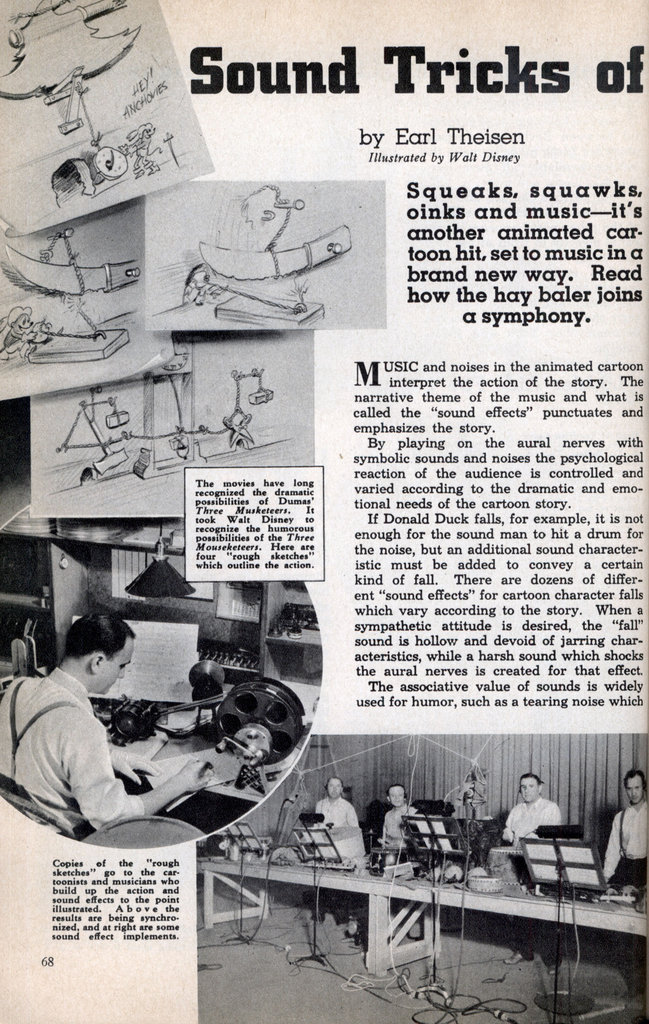 Squeaks, squawks, oinks and musicâ€”it’s another animated cartoon hit set to music in a brand new way. Read how the hay baler joins a symphony.

MUSIC and noises in the animated cartoon interpret the action of the story. The narrative theme of the music and what is called the “sound effects” punctuates and emphasizes the story.

By playing on the aural nerves with symbolic sounds and noises the psychological reaction of the audience is controlled and varied according to the dramatic and emotional needs of the cartoon story.

If Donald Duck falls, for example, it is not enough for the sound man to hit a drum for the noise, but an additional sound characteristic must be added to convey a certain kind of fall. There are dozens of different “sound effects” for cartoon character falls which vary according to the story. When a sympathetic attitude is desired, the “fall” sound is hollow and devoid of jarring characteristics, while a harsh sound which shocks the aural nerves is created for that effect.

The associative value of sounds is widely used for humor, such as a tearing noise which accompanies the falling of a character. For humorous responses the “sound effect” is often caricatured and distorted. An example of this was the tire skidding noise used in “The Tortoise and the Hare” when the fast moving rabbit slid to a stop.

Through study and experimentation Walt Disney and his engineers have found that by introducing music or various sounds and noise frequencies into the cartoon, the response of the audience is varied and controlled. By combining noises of certain pitches or tempos the psychological values of the cartoon music is emphasized in keeping with the story requirements.

Sound of sixteen cycles is deep toned and may be used for conveying heavy or depressing moods, whereas the sound of a higher frequency is what William Garity, Chief Engineer at Walt Disney’s, calls the “pain sensitive region.” Noises of this higher pitch make the hearer alert and may be carried to the point of actually causing distress, such as a “file on glass” noise. The average ear is very sensitive to sounds of 2,000 or 3,000 cycles and unless some sound of this pitch is added to the cartoon background noise, the audience is less responsive to the effects.

Stories are told by sound. “Pinto” Colvig, who wrote the lyrics for “The Three Little Pigs” and who does many of the sound “imitations” for automobiles, airplanes, or machines when they assume human characteristics, is able to convey a whole story by sound. For example, in a recent picture he caricatured a steam roller at work by suitable noises, pops, puffs, razzes, and wheezes. Vocally, without the aid of mechanical devices, he depicted a narrative episode of a very busy steam roller that worked hard, then got tired and stopped. To do this he made a picture on paper of the sound by working out the suitable suggestive sounds and inflections which he set down on music paper according to the desired effects, tonal range, and tempo which brought to life the pen and ink steam shovel. “Pinto” Colvig with the aid of a trombone and vocal sounds can make an airplane do all sorts of antics. Real airplane sounds cannot be controlled to musical tempo for cartoon effects. Each sound in a cartoon film is the result of much thought. Such things as bugs, all sizes, getting the hiccoughs which happened in “Mickey’s Garden” when Mickey sprayed them with “bug eliminator” required hours of rehearsal before the sound was recorded. For some sounds hours are required in rehearsal, and fifty or sixty hours are required to make the sound for the average cartoon.

There are six men and women under contract at Disney’s who do nothing but mimic and imitate many sounds. The distorted Donald Duck conversation and singing is done entirely by mouth without mechanical aid, as is that of Madame Clara Cluck, Mickey, and the other characters. Walt, himself, does the Mickey chatter. Much of the “imitator’s” time is spent in inventing cartoon noises.

For cartoon kisses, the “imitator” kisses his own hand or arm. For a Mickey-Minnie embrace, the “imitator” kisses the heel of his hand, while a tiny bug osculation is obtained from his thumb. A moist noisy smack is gained by kissing his arm at the elbow bend. Cartoon embraces are not as emotional as they are humorous because of the caricatured sound.

Recently a sound of a cartoon character talking under water was needed. After much experimentation, the sound was made by one of the “imitators” who talked while a common garden hose ran a stream of water into his mouth.

While much of the sound is made vocally, mechanical devices and various materials are also used. One kind of slow-burning fire noise is made by crinkling cellophane, while a more crackling fire sound is gained by twisting a bundle of bamboo strips. A train getting under way is obtained by a tin can in which is a handful of gravel. By shaking the can and gravel up and down, the noise of a real railroad train is created. Another “train noise maker” consists of a number of wires held at one end by hand. The other end of the wires is rubbed over a sheet of corrugated tin. Thunder claps of various kinds are obtained by cowhides and sheets of metal, while wind noises are made by rapidly revolving a wheel with wire spokes. Another hollow ghostly wind noise is made by revolving a wooden drum against taut silk. Rain noises are made in a drum in which are stretched piano wires. Particles of glass dropping against the wire when the drum is revolved creates the sound.

Lion roars are obtained from a barrel over which is stretched, drumlike, a piece of skin. Into the center of this skin is tied a heavy piece of cat-gut and the sound is made by sliding a rosin coated piece of leather down the cat-gut. Dog barks are made by similar though smaller contraptions. Various dog bark pitches are made by using assorted sizes of tin cans. The dog “language” is produced by the manner in which the rosined leather is slid on the string. Often ordinary tools such as egg beaters which furnish machinery noise, derby hats which supply thumping or more exactly a “plop in” sound, and so forth are used for suitable noises.

For “squirrel conversation” a cork is twisted in a bottle with a “cartoon technique” in such a way that various meanings are conveyed. The squirrels may be made to seem excited, in love, or just chatting.

The sound stages where the recording is done are constructed of hard surfaced plaster board lined with blanket layers of mineral wool, felt padding, and matting interspersed with air pockets which aid in “damping” extraneous sounds. Thick layers of felt padding and carpeting are laid on the floor. There are two stages; one of which is entirely sound-proofed, or “damped,” while a second stage is “live” in that it permits echos to reach the microphone.

Many devices are specially constructed in order that certain sound frequencies are dampened so the “imitator” has a better control over the pitch and volume of the noise. Special resonators in the pianos, doors set in elaborate resonating jams so “door-closing” noises may be made for cartoon purposes, and many other constructions are necessary.

Even the Silly Symphony orchestra is set in a special resonator made of maple wood because of a required resonating quality of this wood. The resonator which gives a richness to the tone is built in the form of a large tapering loud speaker on one of the sound stages. It is suspended in a floating arrangement so as to eliminate echo vibration. Walt Disney, who knows the dramatic value of various sounds and musical tempos, has constructed many novel devices in order to produce the necessary sounds.

The background orchestral music is valuable in directing the emotional responses of the audience, and is used to elaborate on the cartoon story by what Walt Disney prefers to call the “earical illusion.” The psychological reactions of the theatre audience to suggestive noise, musical tempo and tune are carefully considered in composing musical scores for the animated cartoon.

The emotional effect is gained not so much by the music itself as by the manner in which it is played and the noise effects instilled into the orchestration. In connection with the villain, for example, an annoying “out of step” sound is cleverly interwoven into the background music melody is “timed” into the musical effects.

By tempo and musical “timing” the audience may be excited or lulled into “earical” pleasures. Musical tempo is used for speeding up the action of the cartoon story when things rapidly happen. To do this a slow musical tempo is played as a background music until the tempo or “time” is established with the audience, and then the “time” is gradually increased. This literally sucks the audience along in what the Disney artist calls a “musical vacuum.”

When bugs march off to battle in a pseudo serious portrayal of a march, four-four time is used, while six-eight time is used for swinging comedy marches. Two-four time is used for “background” music where there are “chases” or where music with a definite beat in which the action is gradually speeded. Three-four waltz time serves for scenes where beauty is emphasized.

Music and sound has become an exact science with Walt Disney. The music and sound effects in his cartoon psychologically tell the film story for the ears as the picture on the screen does for the eyes.