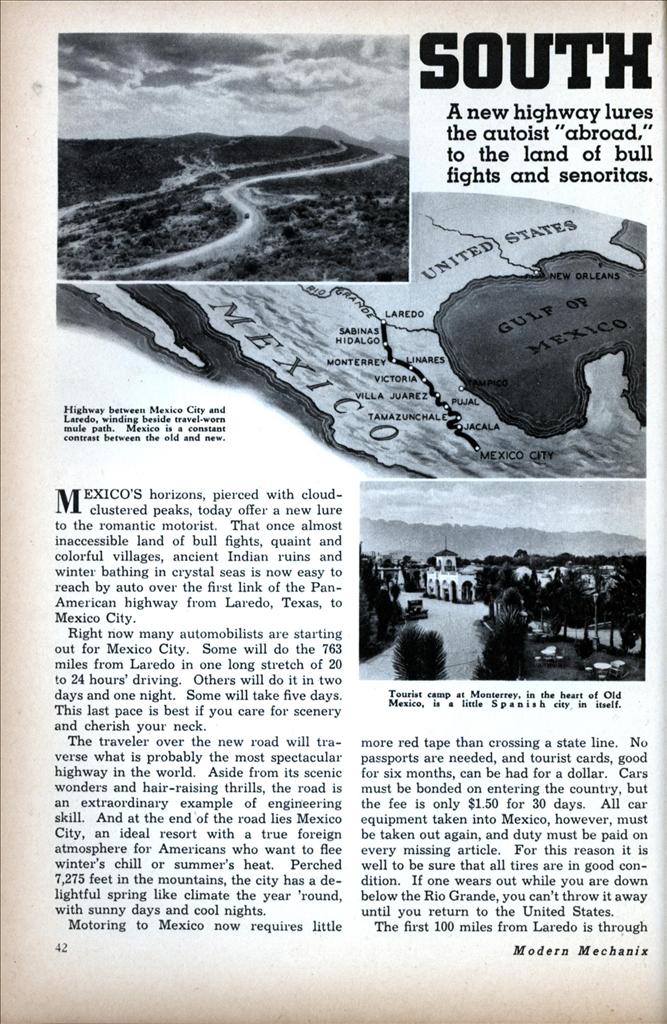 A new highway lures the autoist “abroad,” to the land of bull fights and senoritas.

MEXICO’S horizons, pierced with cloud-clustered peaks, today offer a new lure to the romantic motorist. That once almost inaccessible land of bull fights, quaint and colorful villages, ancient Indian ruins and winter bathing in crystal seas is now easy to reach by auto over the first link of the Pan-American highway from Laredo, Texas, to Mexico City.

Right now many automobilists are starting out for Mexico City. Some will do the 763 miles from Laredo in one long stretch of 20 to 24 hours’ driving. Others will do it in two days and one night. Some will take ^ve days. This last pace is best if you care for scenery and cherish your neck.

The traveler over the new road will traverse what is probably the most spectacular highway in the world. Aside from its scenic wonders and hair-raising thrills, the road is an extraordinary example of engineering skill. And at the end of the road lies Mexico City, an ideal resort with a true foreign atmosphere for Americans who want to flee winter’s chill or summer’s heat. Perched 7,275 feet in the mountains, the city has a delightful spring like climate the year ’round, with sunny days and cool nights.

Motoring to Mexico now requires little more red tape than crossing a state line. No passports are needed, and tourist cards, good for six months, can be had for a dollar. Cars must be bonded on entering the country, but the fee is only $1.50 for 30 days. All car equipment taken into Mexico, however, must be taken out again, and duty must be paid on every missing article. For this reason it is well to be sure that all tires are in good condition. If one wears out while you are down below the Rio Grande, you can’t throw it away until you return to the United States. The first 100 miles from Laredo is through flat cactus and chaparral country, hot and monotonous, so take plenty of water for yourself and your car. But there is one stretch where the highway runs for 47 miles in a straight line. It is a perfect road and the driver who likes speed can quickly leave the cacti behind. Soon the crests of the Sierra Mountains loom ahead, like faraway clouds, and the climb begins into the foothills. A gorgeous panorama unfolds at Mamulique Pass, and from there it is an easy descent in the city of Monterrey—a gem of a city, the cleanest in Mexico, and full of interesting sights. Although only 145 miles from the border, it is an excellent place to spend the first night. It is not only a good introduction to Old Mexico, but it has even better hotel accommodations than Mexico City.

From Monterrey one will always be in or under mountains. The 181 miles to Victoria is through hilly country, but the road is well paved and in good condition. The highway passes through virgin country and in some villages near the road the Indians are learning to speak English.

The climate this far is similar to that of Southern Texas. Just south of Victoria, the Tropic of Cancer is crossed, and with the road dipping into the lowlands again, there will be about 200 miles of real tropical heat. In the heart of the Indian country, virtually inaccessible until the Pan-American highway was opened, the parrots screech from their jungle perches at the invading motor cars chuffing into Tamazunchale.

Immediately upon leaving Tamuzunchale (pronounced Thomas an’ Charlie by the gringos) the real climb into the Sierra Madres begins. In 20 miles the road ascends about 8,000 feet to a point overlooking the great Mesa Central, on which Mexico City lies. The 64-mile stretch to Jacala was the last part to be completed, and is still subject to slides. Known as the “Horror Stretch” this is no place for the nervous driver. For hours you seemingly ride on wheels in the sky, in a world of clouds—above them, through them and between them.

In places this road used to be a nine-foot wide mule trail, hanging over sheer gorges thousands of feet deep. Now at the curves it is 65 feet wide, with the outer edges balustraded. But it will always be dangerous for cars without good gears and brakes and it is the last place on earth for a careless driver. It is no road for night driving and never will be, for the night fogs would prevent even the best driver dodging a mountain slide, visible and easily avoided by day. Most important, a night rider would miss the grandeur of the scenery, with its breath-taking panoramas at every turn. The five hours necessary for these 64 miles are probably the most worth while of the entire trip.

While this stretch of hairpin turns is being paved as rapidly as possible, much of the road is still flinty rock that will tear new tires to shreds at speeds greater than 15 miles an hour. This is another reason why all your tires should be in perfect condition when you set out.

After leaving Jacala you climb 2,000 feet higher through magnificent mountains. This stretch has been freshly paved and can be covered at 30 miles an hour—if you don’t care for scenery. After 40 miles of this, you enter the Hacienda country, the land of large plantations. The rest of the trip is over a high, level table-land.

It is important that the car be in good condition before setting out. Good mechanics and spare parts will be found in Monterrey and Mexico City, but will be mighty scarce on the long stretches in between. Tires, tubes and parts cost about double in Mexico owing to high import duties. Gasoline averages about 23 cents a gallon, and is sold by the liter, 3.8 liters equalling one gallon. There are fewer service stations along the route than on most main highways in the United States, but the number will increase quickly as travel becomes heavier. Oil stations are 25 miles apart or more. Hotel, tourist camp and eating places are reasonable and excellent At least ten places along the route have hotel accommodations now, and there are new “tourist courts” at two or three points, the beginning of a chain. The most famous is at Monterrey, and resembles a little Mexican city in itself. A boom town along the way is Villa Jaurez, which boasts of a hotel with 40 rooms and 40 shower baths, besides other small hostelries.

Traffic signs, of course, are in Spanish. Speed limits are posted in kilometers, a kilometer being five-eighths of a mile. The sign reading Velocida Maxima—80 means that the speed limit is 50 miles per hour. In towns the speed limit is 25. The peso is the monetary unit, worth about 28 cents in American currency. Prices are posted in Mexican money, using the familiar dollar sign. Don’t be shocked if the hotel asks $10 for a room— that’s only $2.80 in Yankee money.

Other pointers for autoists Mexico-bound include the simple advice of taking along identification papers, such as tax receipts or auto club cards, to prove legal residence in the United States. Naturalized citizens should carry their papers and aliens their passports. Since it is illegal to use foreign money in Mexico, currency should be exchanged at the border, or travellers’ checks should be carried. These details all can be handled at the border within an hour.

Since the only good motor roads in Mexico are the Pan-American Highway and roads radiating from Mexico City, the trip must start at Laredo. Immediately after crossing the International Bridge you must stop at the Customs for baggage inspection. There your baggage will be sealed and the seals must not be broker, until the two Custom Inspection Stations, 14 miles and 108 miles to the south, have been passed.

The road to Mexico City is really only the first link in the highway that eventually will enable you to motor to South America. Each Government is constructing its own part of the road as fast as its funds will permit. Links of varying lengths have been built in all the countries in Central and South America and these will be connected gradually to form one continuous highway rolling down to Rio along the Atlantic side, down to Buenos Aires, in the Argentine, spanning the mighty Andes to Santiago, Chile, and turning back north along the Pacific up through Peru.

The impetus for completion of this fascinating loop around South America will come from the North as American tourists pave the way with their money. Mexican travel authorities expect each American to spend $70 each, a figure based on the $100,000,000 a year Americans have spent to hop in the family car and “go abroad” to Canada. Mexico could use some of that spare change—and thinks she’ll get it now.