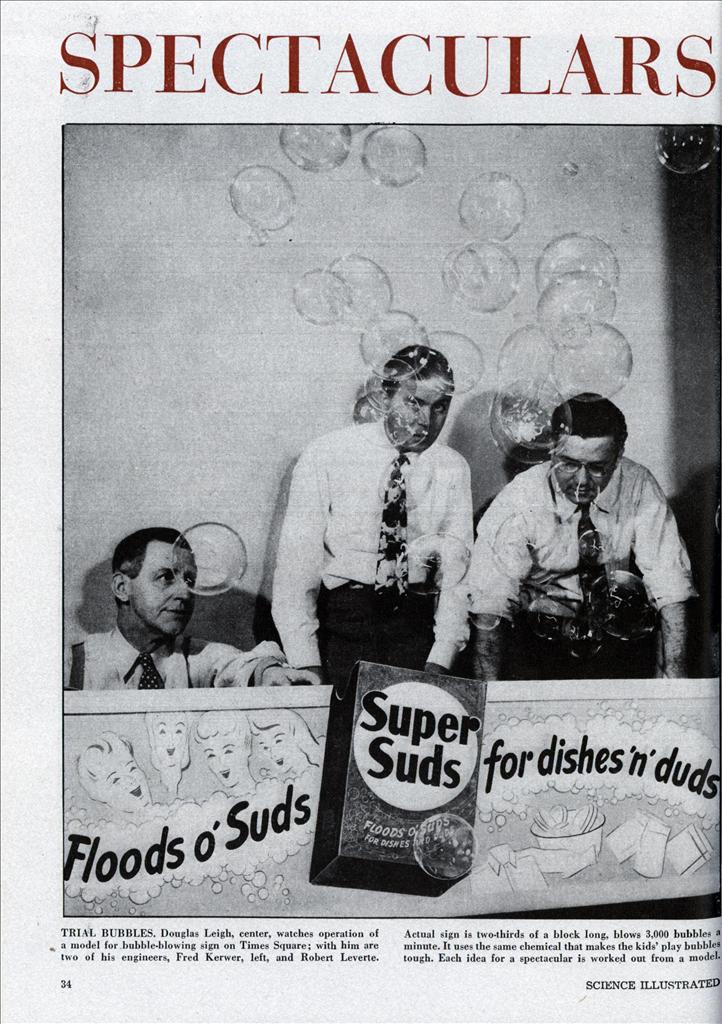 The sky’s no limit to Douglas Leigh, today’s Lamplighter of Broadway and King of the Spectaculars, those illuminated, animated supersigns that are catching on across the country. Boy Wonder of the illuminated sign business in the early 1930’s (he’s only 36 now), Alabama-born Leigh has built several striking spectaculars since the war and plans many more, but even he will have to go some if he ever surpasses the imagination and daring that produced his new flying spectaculars..

Inspiration for the skyriding spectaculars, 265-foot dirigibles that flash sales messages in the night to millions of people, came to Leigh while he still was in the Navy. After the war, he took the idea to the Navy and surplus-property authorities. Both were pleased, since an airship is a trifle harder to dispose of than a parka and it had begun to appear likely that surplus dirigibles might be dismantled and their rubber turned into raincoats. Leigh bought seven of the ships, to the Navy’s delight, since he keeps them in fine flying fettle and ready on call for the Navy.

Electric lights on each side of the Leigh dirigibles carry a continuous message, or running sign. The signs are transmitted the same way as are running signs and electric news strips on the ground. Letters of a message are perforated on a tape before a flight. In making the display, the tape is drawn over a drum containing circuit breakers keyed to each cluster of lights (see pages 36, 37) in the sign. Each perforation closes a circuit and causes the lights, in reading sequence, to spell out the words of the message.

Ordinary light bulbs and sockets would mean a lot of weight, however, so Fred Kerwer, Leigh’s chief engineer, prescribed 10 Christmas-tree bulbs of 2.8 volts each in clusters 18 inches in diameter, each cluster having a single tubular socket into which the lamps were fitted and connections soldered. Each cluster appears as one light at 1.000 feet. Some engineers doubted that running signs would be clearly visible from high in the air, but Leigh’s messages are readable easily at 2% miles, and the sign is visible at five miles. Each side of the 170-foot sign contains 5,000 of the small bulbs, arranged to carry letters 27 feet tall. Only 15 out of 10,000 lamps in the flying spectacular went bad in the course of two weeks’ service.

Leigh’s latest land spectacular for Times Square contains 15,000 bulbs and 1,000 feet of neon. It shows Mr. Peanut as a magician. But the ground can’t hold Leigh any more: recently he has been seen casting covetous glances at the fair white surface of the moon.