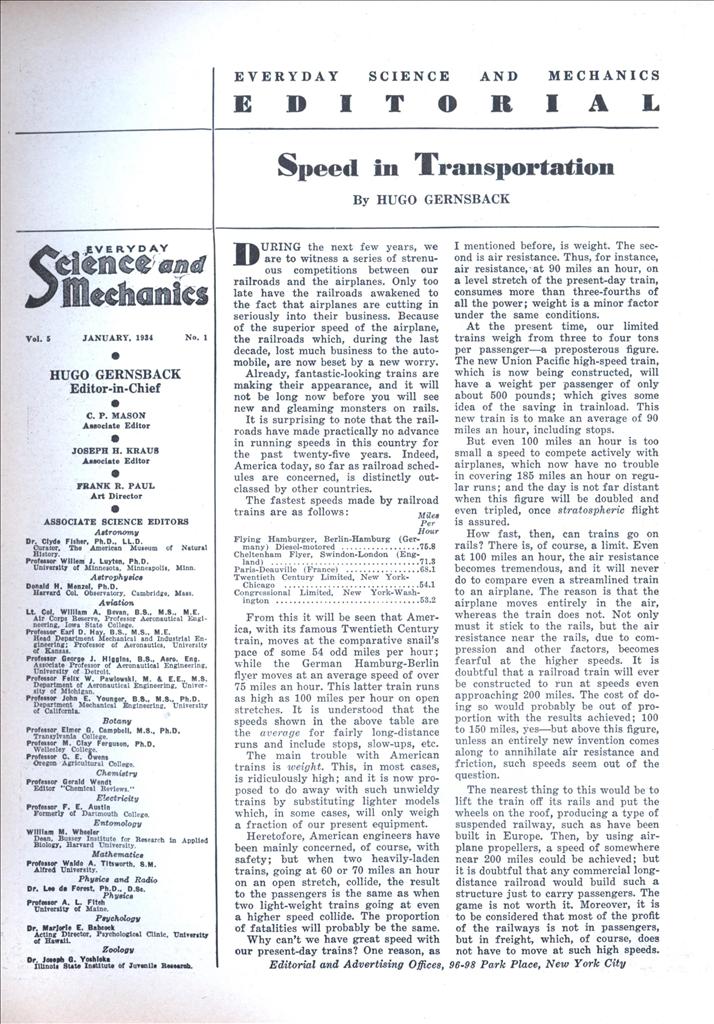 Already, fantastic-looking trains are making their appearance, and it will not be long now before you will see new and gleaming monsters on rails.

It is surprising to note that the railroads have made practically no advance in running speeds in this country for the past twenty-five years. Indeed, America today, so far as railroad schedules are concerned, is distinctly outclassed by other countries.

The fastest speeds made by railroad trains are as follows:

From this it will be seen that America, with its famous Twentieth Century train, moves at the comparative snail’s pace of some 54 odd miles per hour; while the German Hamburg-Berlin flyer moves at an average speed of over 75 miles an hour. This latter train runs as high as 100 miles per hour on open stretches. It is understood that the speeds shown in the above table are the average for fairly long-distance runs and include stops, slow-ups, etc.

The main trouble with American trains is weight. This, in most cases, is ridiculously high; and it is now proposed to do away with such unwieldy trains by substituting lighter models which, in some cases, will only weigh a fraction of our present equipment.

Heretofore, American engineers have been mainly concerned, of course, with safety; but when two heavily-laden trains, going at 60 or 70 miles an hour on an open stretch, collide, the result to the passengers is the same as when two light-weight trains going at even a higher speed collide. The proportion of fatalities will probably be the same.

Why can’t we have great speed with our present-day trains? One reason, as I mentioned before, is weight. The second is air resistance. Thus, for instance, air resistance, at 90 miles an hour, on a level stretch of the present-day train, consumes more than three-fourths of all the power; weight is a minor factor under the same conditions.

At the present time, our limited trains weigh from three to four tons per passenger—a preposterous figure. The new Union Pacific high-speed train, which is now being constructed, will have a weight per passenger of only about 500 pounds; which gives some idea of the saving in trainload. This new train is to make an average of 90 miles an hour, including stops.

But even 100 miles an hour is too small a speed to compete actively with airplanes, which now have no trouble in covering 185 miles an hour on regular runs; and the day is not far distant when this figure will be doubled and even tripled, once stratospheric flight is assured.

How fast, then, can trains go on rails? There is, of course, a limit. Even at 100 miles an hour, the air resistance becomes tremendous, and it will never do to compare even a streamlined train to an airplane. The reason is that the airplane moves entirely in the air, whereas the train does not. Not only must it stick to the rails, but the air resistance near the rails, due to compression and other factors, becomes fearful at the higher speeds. It is doubtful that a railroad train will ever be constructed to run at speeds even approaching 200 miles. The cost of doing so would probably be out of proportion with the results achieved; 100 to 150 miles, yes—but above this figure, unless an entirely new invention comes along to annihilate air resistance and friction, such speeds seem out of the question.

The nearest thing to this would be to lift the train off its rails and put the wheels on the roof, producing a type of suspended railway, such as have been built in Europe. Then, by using airplane propellers, a speed of somewhere near 200 miles could be achieved; but it is doubtful that any commercial long distance railroad would build such a structure just to carry passengers. The game is not worth it. Moreover, it is to be considered that most of the profit of the railways is not in passengers, but in freight, which, of course, does not have to move at such high speeds.