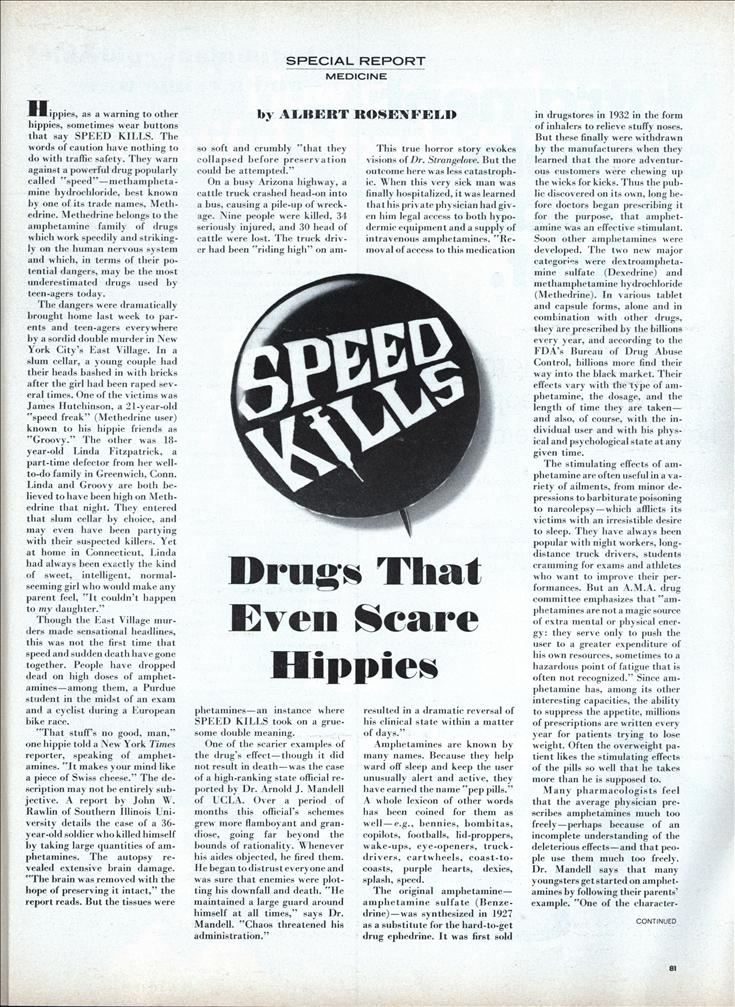 The dangers were dramatically brought home last week to parents and teen-agers everywhere by a sordid double murder in New York City’s East Village. In a slum cellar, a young couple had their heads bashed in with bricks after the girl had been raped several limes. One of the victims was Jaines Hutchinson, a 21-year-old “speed freak” (Methedrine user) known to his hippie friends as “Groovy.” The other was 18-year-old Linda Fitzpatrick, a part-time defector from her well-to-do family in Greenwich, Conn. Linda and Groovy are both believed to have been high on Methedrine that night. They entered that slum cellar by choice, and may even have been partying with their suspected killers. Yet at home in Connecticut, Linda had always been exactly the kind of sweet, intelligent, normal-seeming girl who would make any parent feel, “It couldn’t happen to my daughter.”

Though the East Village murders made sensational headlines, this was not the first time that speed and sudden death have gone together. People have dropped dead on high doses of amphetamines— among them, a Purdue student in the midst of an exam and a cyclist during a European bike race.

“That stuff’s no good, man,” one hippie told a New York Times reporter, speaking of amphetamines. “It makes your mind like a piece of Swiss cheese.” The description may not be entirely subjective. A report by John W. Rawlin of Southern Illinois University details the case of a 36-year-old soldier who killed himself by taking large quantities of amphetamines. The autopsy revealed extensive brain damage. “The brain was removed with the hope of preserving it intact,” the report reads. But the tissues were so soft and crumbly “that they collapsed before preservation could be attempted.”

On a busy Arizona highway, a cattle truck crashed head-on into a bus, causing a pile-up of wreckage. Nine people were killed, 34 seriously injured, and 30 head of cattle were lost. The truck driver had been “riding high” on am- phetamines— an instance where SPEED KILLS took on a gruesome double meaning.

One of the scarier examples of the drug’s effect—though it did not result in death—was the case of a high-ranking state official reported by Dr. Arnold J. Mandell of UCLA. Over a period of months this official’s schemes grew more flamboyant and grandiose, going far beyond the bounds of rationality. Whenever his aides objected, he fired them. He began to distrust everyone and was sure that enemies were plotting his downfall and death. “He maintained a large guard around himself at all times,” says Dr. Mandell. “Chaos threatened his administration.”

This true horror story evokes visions of Dr. Slrangelove. But the outcome here was less catastrophic. When this very sick man was finally hospitalized, it was learned that his private physician had given him legal access to both hypodermic equipment and a supply of intravenous amphetamines. “Removal of access to this medication resulted in a dramatic reversal of his clinical state within a matter of days.”

Amphetamines are known by many names. Because they help ward off sleep and keep the user unusually alert and active, they have earned the name “pep pills.” A whole lexicon of other words has been coined for them as well — e.g., bennies, bombitas, copilots, footballs, lid-proppers, wake-ups, eye-openers, truck-drivers, cartwheels, coast-to-coasts, purple hearts, dexies, splash, speed.

The original amphetamine— amphetamine sulfate (Benzedrine)—was synthesized in 1927 as a substitute for the hard-to-get drug ephedrine. It was first sold in drugstores in 1932 in the form of inhalers to relieve stuffy noses. But these finally were withdrawn by the manufacturers when they learned that the more adventurous customers were chewing up the wicks for kicks. Thus the public discovered on its own, long before doctors began prescribing it for the purpose, that amphetamine was an effective stimulant. Soon other amphetamines were developed. The two new major categories were dextroamphetamine sulfate (Dexedrine) and methamphetamine hydrochloride (Methedrine). In various tablet and capsule forms, alone and in combination with other drugs, they are prescribed by the billions every year, and according to the FDA’s Bureau of Drug Abuse Control, billions more find their way into the black market. Their effects vary with the type of amphetamine, the dosage, and the length of time they are taken— and also, of course, with the individual user and with his physical and psychological state at any given time.

The stimulating effects of amphetamine are often useful in a variety of ailments, from minor depressions to barbiturate poisoning to narcolepsy—which afflicts its victims with an irresistible desire to sleep. They have always been popular with night workers, long distance truck drivers, students cramming for exams and athletes who want to improve their performances. But an A.M.A. drug committee emphasizes that “amphetamines are not a magic source of extra mental or physical energy: they serve only to push the user to a greater expenditure of his own resources, sometimes to a hazardous point of fatigue that is often not recognized.” Since amphetamine has, among its other interesting capacities, the ability to suppress the appetite, millions of prescriptions are written every year for patients trying to lose weight. Often the overweight patient likes the stimulating effects of the pills so well that he takes more than he is supposed to.

Many pharmacologists feel that the average physician prescribes amphetamines much too freely — perhaps because of an incomplete understanding of the deleterious effects—and that people use them much too freely. Dr. Mandell says that many youngsters get started on amphetamines by following their parents’ example. “One of the characteristic rationalizations,” lie says, “is ‘If mother is on it, can it be so bad?’ ”

Amphetamines are not considered to be addictive. But the body does build up a tolerance to them, so that larger and larger doses are required to maintain the same “high.” Habituated users can pop pills by the mouthful, several times a day, and take in incredible quantities—quantities that could be lethal to normal people. The greatest danger comes when amphetamine “heads” get bored with taking pills and begin hypoing the drug directly into their veins—sometimes for “runs” that last several days. At this point they are so dependent on the drug that the difference between “dependence” and “addiction” becomes a semantic quibble.

The hazards of amphetamine, like the beneficial effects, vary with the individual and the dosage. As a rule, there is little danger in taking prescribed amounts under a doctor’s supervision. After taking amphetamine the patient may become nervous and overtalkative and have a hard time sleeping at night. If the drug is continued over a period of time, especially at increased dosages, the user may become easily agitated and suffer from a lack of appetite that results in a dangerous loss of weight. He may also become affected by tremors and hallucinations, as well as digestive, respiratory and circulatory troubles. “In some persons,” says the A.M.A. drug committee, “amphetamines produce an acute and florid paranoid psychosis.” Behavior under these circumstances tends to be impetuous and unpredictable. “Thrill pills are worse than marijuana,” said one user. “After you take them you’re ready to do anything. You feel like you can lick anybody, or pull off any kind of job.” Another said, “You get a fantastic rush—a feeling that you’re speeded up. You think you can do anything. It opens up little doors to the channels in your mind so you actually believe you can do anything.” But “most speed freaks,” he added, “get to a point where they’re seeing narks [narcotics detectives] in the trees with cameras and believe that the old lady next door has wired their pads.” Especially after injection of the drug, said a California research team headed by Dr. John C. Kramer in the Journal of ,he AMA, “the user gets a sudden generalized, over whelming, pleasureful feeling called a ‘flash’ or a ‘rush.’ ” Then what is wanted is action—even if the action turns out to be violent.

Many users claim that Methedrine brings on a strong sex urge. Dr. Kramer’s group reported that in most of the subjects they saw ‘”sexual interest is enhanced considerably, though two men indicated that their interest was diminished.” The drug often seems to delay orgasm, thus prolonging intercourse. But other studies, including Rawlin’s at Southern Illinois University, indicate that, sexually speaking, amphetamines appear to turn off just as man) users as they turn on. In fact, some doctors are reluctant to prescribe amphetamines for aging males who have doubts about their potency.

The amphetamine problem is hardly limited to the U.S. It got so bad in Great Britain and Australia that some doctors, questioning whether the abuses did not outweigh the uses, advocated that amphetamines be altogether outlawed. There is a stunning historical demonstration of what can happen with unrestricted amphetamine use. In the late 1940s and early 1950s when amphetamines were available without prescription in Japan a “stimulant epidemic” swept the country. In one peak year, between half a million and a million persons were habitual users. In 1954, the year amphetamine-control laws went into effect, 55,000 violators were arrested. Of the 10,148 persons taken into custody in May and June of that year, 52% were found to be virtual addicts. Out of 60 murder cases during those same two months, says the noted British physician Dr. Philip H. Connell, “thirty convicted murderers had some connection with amphetamine misuse.”

There has never been a comparable amphetamine crime wave in the U.S. But in Dr. Kramer’s study, published only last July, he warned: “From descriptions of the intensity of the paranoid state and the hyperactivity associated with amphetamine use, crimes of violence by amphetamine users appear likely in the future.” The case of Linda and Groovy in the East Village is a grim reminder of this prediction.