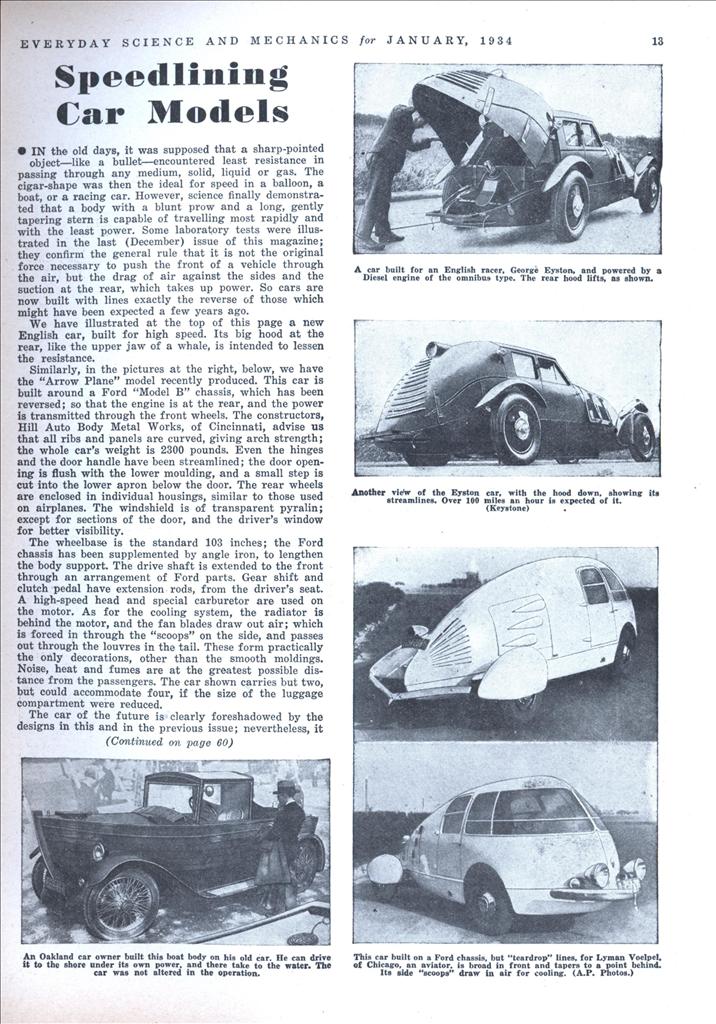 IN the old days, it was supposed that a sharp-pointed object—like a bullet—encountered least resistance in passing through any medium, solid, liquid or gas. The cigar-shape was then the ideal for speed in a balloon, a boat, or a racing car. However, science finally demonstrated that a body with a blunt prow and a long, gently tapering stern is capable of travelling most rapidly and with the least power. Some laboratory tests were illustrated in the last (December) issue of this magazine; they confirm the general rule that it is not the original force necessary to push the front of a vehicle through the air, but the drag of air against the sides and the suction at the rear, which takes up power. So cars are now built with lines exactly the reverse of those which might have been expected a few years ago.

We have illustrated at the top of this page a new English car, built for high speed. Its big hood at the rear, like the upper jaw of a whale, is intended to lessen the resistance.

Similarly, in the pictures at the right, below, we have the “Arrow Plane” model recently produced. This car is built around a Ford “Model B” chassis, which has been reversed; so that the engine is at the rear, and the power is transmitted through the front wheels. The constructors, Hill Auto Body Metal Works, of Cincinnati, advise us that all ribs and panels are curved, giving arch strength; the whole car’s weight is 2300 pounds. Even the hinges and the door handle have been streamlined; the door opening is flush with the lower moulding, and a small step is cut into the lower apron below the door. The rear wheels are enclosed in individual housings, similar to those used on airplanes. The windshield is of transparent pyralin; except for sections of the door, and the driver’s window for better visibility.

The wheelbase is the standard 103 inches; the Ford chassis has been supplemented by angle iron, to lengthen the body support. The drive shaft is extended to the front through an arrangement of Ford parts. Gear shift and clutch pedal have extension rods, from the driver’s seat. A high-speed head and special carburetor are used on the motor. As for the cooling system, the radiator is behind the motor, and the fan blades draw out air; which is forced in through the “scoops” on the side, and passes out through the louvres in the tail. These form practically the only decorations, other than the smooth moldings. Noise, heat and fumes are at the greatest possible distance from the passengers. The car shown carries but two, but could accommodate four, if the size of the luggage compartment were reduced.

The car of the future is clearly foreshadowed by the designs in this and in the previous issue; nevertheless, it appears—from the fate of a Dymaxion model car (illustrated on page 872 of the last issue) which was thrown off the road, at a speed far below its limit, by an irregularity of the surface—that new and extensive roadbuilding will be required to permit the motoring of the future, at airplane speeds.

An ingenious remodeling of a car is also shown in the picture at the lower left of page 13. It is an amphibian vehicle, home-made.