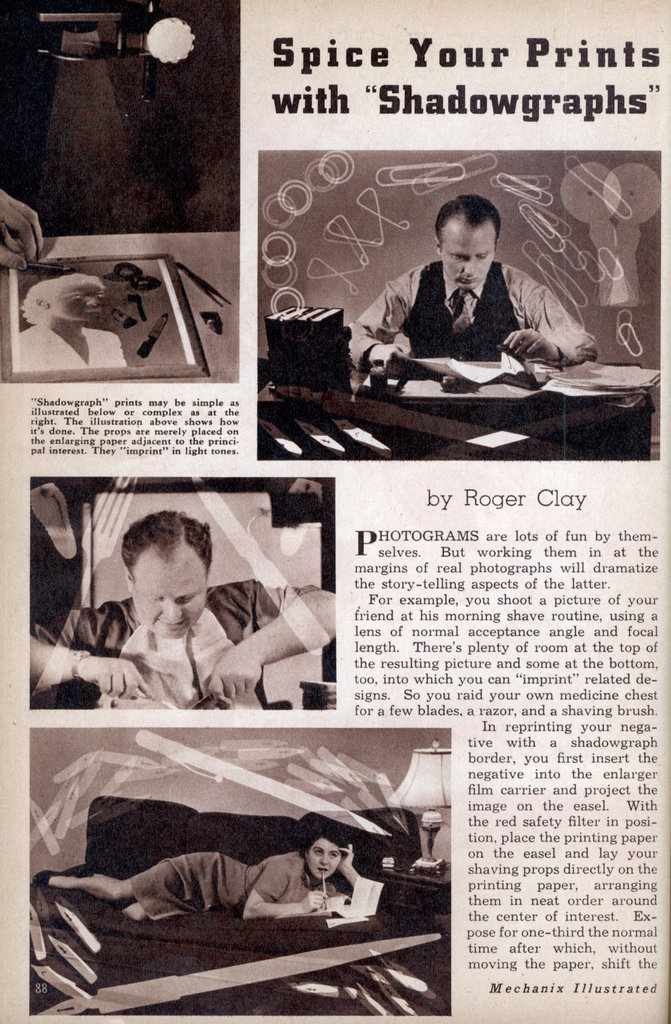 Spice Your Prints with “Shadowgraphs”

PHOTOGRAMS are lots of fun by themselves. But working them in at the margins of real photographs will dramatize the story-telling aspects of the latter.

For example, you shoot a picture of your friend at his morning shave routine, using a lens of normal acceptance angle and focal length. There’s plenty of room at the top of the resulting picture and some at the bottom, too, into which you can “imprint” related designs. So you raid your own medicine chest for a few blades, a razor, and a shaving brush.

In reprinting your negative with a shadowgraph border, you first insert the negative into the enlarger film carrier and project the image on the easel. With the red safety filter in position, place the printing paper on the easel and lay your shaving props directly on the printing paper, arranging them in neat order around the center of interest. Expose for one-third the normal time after which, without moving the paper, shift the positions of the razor blades slightly, and then expose for the second third of the normal time. The last third of the exposure is given with all the props removed from the paper. The resulting print is shown at the upper right hand corner of this page. Note that the brush and razor are not shifted at all.

The reason for shifting the position of the props on the paper between exposures, is to get the interesting contrasts of white and gray tones that occur where the props partly overlap their previous positions. And since you don’t want the “imprinted” objects to appear too white, you allow the picture to expose lightly over the portions which they covered by removing them before completing the exposure.

In planning your photogram arrangement, decide which props you wish to accent and then leave these props in place on the paper for a proportionately longer period of exposure. This will cause them to appear whiter than the others and thus give them the desired prominence.

The correct exposure for the entire negative can be determined my means of a photometer or by making test strips. Dividing the time into thirds is simple arithmetic. In some cases, however, it may be desirable to divide the exposure time in quarters or fifths to permit more complex manipulation of the photogram props.

Props that are laid over gray negative tones will not need as much exposure to show up effectively as those that are laid on light or clear negative tones. The reason for this is that after an exposure is made and the positions of the instruments changed, the gray tones in the negative will not darken the white shadows left by the props as readily as the clear parts of the negative will.

In arranging the props, strive for a sample design that will carry around and tie in with the composition of the picture. In some cases, it is even better to limit the number of props to a few simple essential ones.

If you plan your effects beforehand, you can simplify everything by allowing marginal space for the photograms when taking the pictures.