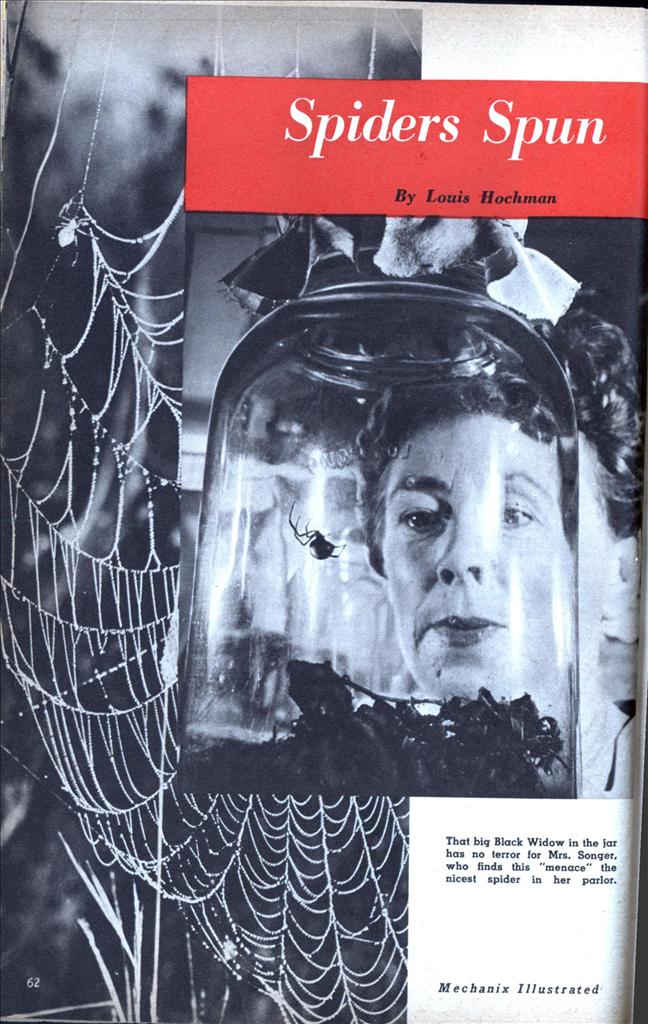 Meet a housewife who lives on the cobwebs in her home—and just loves Black Widows.

“COME into my parlor,” said Mrs. Nan Songer to the big spider who sidled up beside her at her home in Yucaipa, Calif.

Because she not only refused to follow in Little Miss Muffet’s hasty footsteps but invited the spider into her home, the insects now are busy repaying Mrs. Songer for her kindness by spinning her the oddest career in the country—cultivating cobwebs, right in her own home. Every day her brood of more than 50 spiders turn out hundreds of feet of fine silken strands that she sells to manufacturers of precision optical instruments. These clients use the delicate cobwebbing for cross hairs in gunsights, bombsights, surveyor’s transits, periscopes, observatory instruments, and other scientific apparatus.

It all started 11 years ago when Mrs. Songer, who was fascinated by the friendly spider, got interested in collecting other spiders and moths, butterflies and crickets. She studied their habits, then reported her findings to the Smithsonian Institution in Washington, D. C. Before she realized it, she had built up a reputation as an authority on bugs.

When war broke out in 1941, the U.S. Bureau of Standards asked her: “Can you produce high-grade spider web in quantity?”

Mrs. Songer said yes, she could—and has been doing it ever since. Her spiders played a vital part in winning the war on all fronts, since they made it possible to mass-produce optical instruments of great precision.

Today, she has a parlor full of healthy, contented spiders. She keeps them in cloth-covered jars and screened-in cages and segregates those species like the Black Widow, that don’t get along well together, into separate bottles. A little dried shrubbery, thrown into each jar, gives the spiders enough support to build their web homes. But this is not the web Mrs. Songer sells. That’s drawn directly from the spider at the right time and carefully wound around wire frames for the manufacturer in individual strands up to two inches in length.

Since most spiders spin brittle, cottony stuff, Mrs. Songer uses only those breeds that yield a strong, elastic web of consistent quality and thickness. Top workers in her spidery are the Golden Garden, the Green Lynx and the Black Widow.

“You needn’t be afraid of the Black Widow,” she assures. “It’s one of the most friendly spiders—never bites you unless it gets hurt. I’ve handled them for years and never had an accident.”

Poisonous or not, Mrs. Songer always handles her spiders with tweezers. She grasps them firmly by the legs but takes care not to pull off their legs.

To milk the spider of its web, Mrs. Songer transfers the creature to a soft yucca block. Then she pins the spider down with a large staple passed over its body—much as a cow is pinned in its stall for milking. The spider’s legs also are clamped down to discourage its annoying habit of reaching behind and breaking off the silk strand.

With a dissecting needle, Mrs. Songer tickles the spider’s spinnerets until it starts giving out the silk. Next, she attaches the strand to the end of a freshly shellacked rectangular two-by-eight-inch wire frame and carefully winds up the webbing. It takes 54 turns, or nine feet, of web to fill a frame. Mrs. Songer sells this web to her clients for $25 per 100 feet.

An adult spider will produce 100 feet of web at a silking, while younger ones will give only 50 feet. Mrs. Songer can silk her spiders every four days. To prepare her cobwebbers, she feeds them well for two days. Then she takes them away from food for two more days to remove any impurities from their systems and insure clean strands. After yielding around 1000 feet of web, the spiders usually die.

Ordinary spider silk is about one-fifth the diameter of human hair. Because of the web’s strength, elasticity and ability to withstand high altitudes and sudden temperature changes, it’s ideal for precision optical instruments and allows them to be used on land or sea or in the sky in any part of the world with no variation in their delicate spider-line accuracy.

Fine as the usual strand is, however, Mrs. Songer often gets orders for even finer web. She then goes to the baby spiders for her silking. When thinner strands are needed for the most precise instruments, she splits the baby spiders’ silk into strands that are almost invisible to the naked eye. She can, and frequently does, split strands down to 5/100,000ths of an inch. For this microscopic work, she prefers the web of a six-week-old Green Lynx spider.

Her splitting technique is based on the anatomy of the spider’s spinning machinery. The silk glands of the spider are clustered like grapes inside the tip of its body. They connect with the spinnerets at the tip. Inside the glands, the silk is in a liquid state. Upon contact with air, this liquid turns into webbing. To split the web, Mrs. Songer keeps snagging at the silk exuding from the spider’s body with a dissecting needle until the web separates into more strands. She pulls these apart without breaking.

For web strong enough to use in high-altitude bombers, she twists three to five strands of Black Widow silk into a single strand, For this neat trick, she uses a homemade gadget that weaves the silk together as it exudes from several spiders at the same time.

Each captive spider’s strand of silk is attached to a knob on a wheel of her gadget. She rotates the wheel and slowly draws away from her spiders to twine their strands uniformly into a single heavier one.

With each type of instrument demanding a different kind of web, Mrs. Songer must keep at least 50 working spiders on hand at all times. During the summer she works the Green Lynx and Golden Garden spiders. As these adults die in the fall, she uses their young, and the Black Widow spider, for winter work.

Operating costs are practically nil. Mrs. Songer feeds her spiders insects that are plentiful and easy to breed. The bottles she uses as homes for her spiders are discarded food jars covered with cloth. The wooden shipping boxes for packaging the spooled web are expensive, since she had to have them specially designed. Manufacturers, though, return these boxes to her, so that she can use them over and over.

Mrs. Songer makes about $200 a month from her spidery. Some small concerns buy an average of only 100 feet of web a year but larger concerns often buy 400 feet a month.

When there is a shortage of spiders in her plant, Mrs. Songer picks up her field glasses and a supply of small glass jars and goes off into the woods on a spider hunt. When she spots a spider through her binoculars she carefully snares it in a jar.

To feed her brood, Mrs. Songer breeds a mess of fruit flies in a large jar. At feeding time, she pokes a long glass-and-rubber tube through the gauze covering of the jar. With a small rubber hose attached to the other end of the tube, she sucks up some of the flies into the glass tubing. A cotton filter prevents the flies from being sucked into her mouth. She then pokes the glass tube into a spider’s jar and blows out the flies—right into the spider’s glass-bottle parlor.

At night when moths come beating on her screens trying to fly into the lights, Mrs. Songer is more hospitable than most women. She lets them in—then feeds them to her spiders.

The spider Mrs. Songer invited to “come into her parlor” didn’t know what he was letting himself in for. Now Mrs. Songer has hundreds of other spiders in her parlor—all busy getting into shape, so that they can spin her a finer career in cobwebs. •