Modern Mechanix
Issue: Nov, 1936
Posted in: Crime and Police
No Comments on SPIES OF INDUSTRY IN ACTION (Nov, 1936) 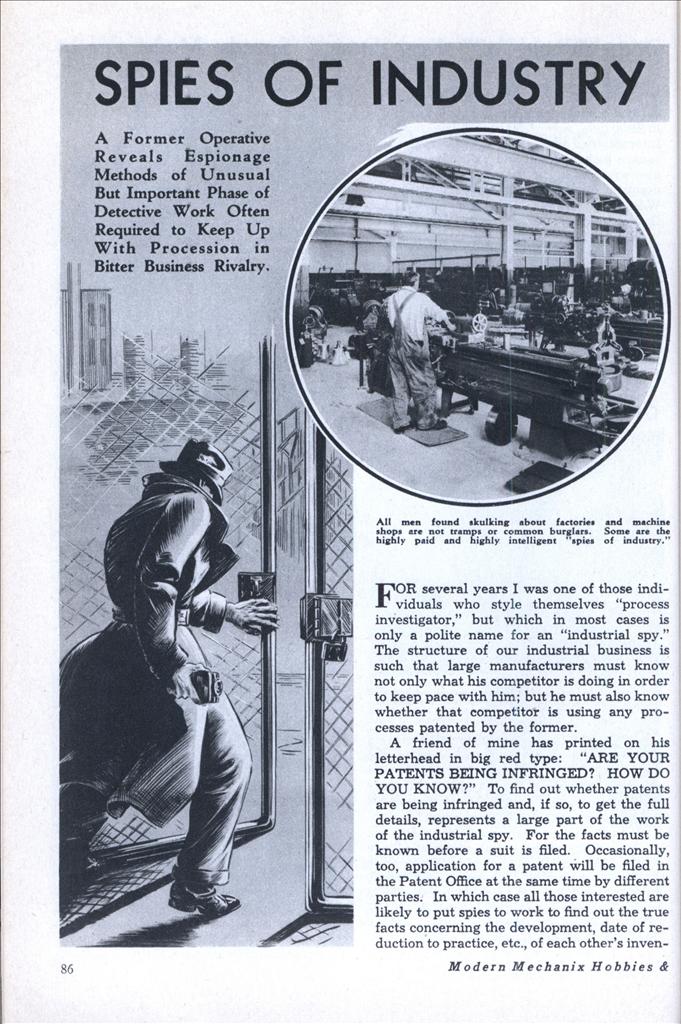 SPIES OF INDUSTRY IN ACTION

A Former Operative Reveals Espionage Methods of Unusual But Important Phase of Detective Work Often Required to Keep Up With Procession in Bitter Business Rivalry, FOR several years I was one of those individuals who style themselves “process investigator,” but which in most cases is only a polite name for an “industrial spy.” The structure of our industrial business is such that large manufacturers must know not only what his competitor is doing in order to keep pace with him; but he must also know whether that competitor is using any processes patented by the former.

A friend of mine has printed on his letterhead in big red type: “ARE YOUR PATENTS BEING INFRINGED? HOW DO YOU KNOW?” To find out whether patents are being infringed and, if so, to get the full details, represents a large part of the work of the industrial spy. For the facts must be known before a suit is filed. Occasionally, too, application for a patent will be filed in the Patent Office at the same time by different parties. In which case all those interested are likely to put spies to work to find out the true facts concerning the development, date of reduction to practice, etc., of each other’s invention. It’s quite an advantage to know if your opponent is telling the truth!

There are two general methods for getting information. The one necessitates the spy going into the plant either as a visitor, or by stealth, or by actually obtaining a job in the plant. The other involves buying this information from disloyal employes or wheedling it out of them by entertainment, cajolery, etc. The most satisfactory means is for you, yourself, to work at the machine or process being operated illegally, for your testimony from the witness stand then carries much weight. This is assuming you cannot get to the witness stand an employe of the infringing company who would be willing to tell the facts.

Sounds easy, doesn’t it? But I assure you that the word demands the skill, ingenuity, resourcefulness and cleverness of a war-time spy. Like the military intelligence, some companies have a net-work of connections over the country to feed information to headquarters. For example, I was established in business as a “Consulting Engineer” in a western city. Two of my associates in this investigational work, all of us employed by the same company, were located in two different cities along the Atlantic seaboard. Each of us had different contacts with scores of men in various plants over the country, and from them received regular reports as to what was going on in each plant. The substance of this information was then passed on by each of us to our “boss.”

Photographs are especially valuable as evidence when an infringement suit comes to trial. The problem of getting such views is a difficult one if it is impossible to bribe a disloyal employe to obtain the pictures. As a casual visitor to the plant, you can often get permission from an unsuspecting company to take the photographs you desire with your own camera. If permission to take pictures is forbidden, but you are allowed in the plant, small watch size cameras are used to take photos unknown to your “host”â€”in reality your opponent. A small motion picture camera, if a chance is given to use one, provides irrefutable evidence.

Large manufacturing companies, as a rule, are highly skeptical of persons seeking admittance when that person has a camera in plain view. Which reminds me of how an acquaintance of mine, a foreigner, and an industrial spy for foreign oil interests, “fooled” an American oil company that had strict rules about cameras, strangers seeking admittance, etc.

For convenience, let’s call this foreigner “X.” Incidentally, he’s no longer in the “game” but now holds a responsible position with an American oil company.

“X” was sent to America to get, among other things, full information concerning the process and equipment that had been perfected by a certain company for “cracking” cheap low-grade oil to make gasoline. He knew that the American company, whose plant he wished to enter, was very secretive about this particular process. So he made his plans . . .

At the office of the head of the refining department of the American company there appeared one day an earnest, convincing young foreigner, who spoke English with difficulty, but who undoubtedly was an expert on the vacuum distillation of oilâ€”the direct opposite of “cracking” which involves distillation under pressure. “He certainly knows his stuff,” said the department head to his assistant in speaking of “X.” “Why, you know, he’s got a patent on a vacuum distillation process we could use; and he’s a graduate of ———and studied under Dr. Gurwitsch at——–.

Let’s offer him a job at $150 a month and send him down to our southern plant to make some experiments.”

Which offer “X” gladly accepted. They had swallowed his bait and he had obtained exactly what he wanted. “X” worked fast. Within three days he knew the smallest details of the construction and operation of the “cracking” stills at this plant. His badge permitted him to pass the gate watchman after working hours and his seemingly foolish questions and general attitude of dumbness, together with his broken English, completely fooled the still operators. They answered all his questions, and let him wander about the units as he pleased. This gave him the chance not only * to corroborate the information given him, but also to photograph all essential parts with a camera he had smuggled past the gateman. He developed his negatives in the darkened closet of his hotel room. His mission was completed.

It was not until three months later when “X’s” progress on his vacuum distillation experiments was just about nil, and he was found out to be spending five or six times his salary, that the company became suspicious. “X” sensed their change in attitude and left town overnight, without bothering to get salary due him, and before they had a chance to fire him. I was working for the duped company at the time, resigned to take another position shortly before “X” left, and got the whole story a year or two later when I encountered “X” in a western state.

Women have flirted with me in an attempt to rob me of important affidavits. The reverse of this is charged in the current Philco suit in Philadelphia against the Radio Corporation of America. The plaintiff contends agents of the rival firm obtained secrets by wining and dining young women workers. The defendant denies the charge.

Companies that have drafting or photostatic work done by outside interests run a bigger risk of having information reach their rivals than do concerns who have such work done within their own plant. The reason is logical; employes of commercial photostatic and drafting firms have no personal interest in their firm’s clients, usually receive a comparatively small pay, and are therefore more easily tempted by the offer of a bribe. The photostatic machine is an especially valuable aid to the work of the industrial spy. I have gotten the operator of such a machine for a commercial establishment out of bed at midnight and worked him till dawn, photostating material that had to be returned to company files by 8 a. m.

Model-making ability is a specially desirable requisite for a successful industrial investigator. Photographs are not always clearly understood by a judge, whereas a model may show him at once just how the defendant is or is not infringing the patent in question. My friend S——— once spent six weeks making a several hundred pound model of a very intricate device and process, based both on what he himself had actually seen and on information furnished him by an employe of the company using the device and process in question. He was able to complete his model before being suspected, but a small army of detectives was on his trail before he was able to ship the model out of town.

S———wired his “boss” for help, and soon wits were matching wits. S——— and his associates won the skirmish by carrying the model at night in a high-powered open top car from its place of concealment to a neighboring town, where it was turned over early the next morning to an express company and a valuation of $10,000 placed on it. S——— lost 20 pounds on that job, and later spent some weeks in the hospital as a result of an injury incurred when the then uncompleted model fell on him one night and he was forced to lie for hours in a strained position to prevent the complete destruction of his workâ€”but the memories of a job well done, he told me, more than repaid him for all the worry and pain he had suffered.

On the defense, companies employ the counterspy systemâ€”just as it is employed in modern warfare. The best defense at all times is to have 100 per cent loyal and satisfied employes. Loyal workers will advise their employers as soon as they are broached by strangers seeking information. But sometimes companies do not take even their employes into their full confidence. I recall the experience of my associate B——– who found, when investigating a process the success of which depended upon the temperature used and which was patented by B———‘s employer, that the thermometers in use were several hundred degrees “off.” B——– got a job in this plant, suspected what was being done, “accidentally” broke one of the thermometers in use and substituted one of his own. You can easily appreciate what effect B———‘s testimony from the witness stand created among the defendant’s lawyers! This same B———did some very celver work a few years ago when he was able to prove through witnesses that a notebook containing alleged evidence of experimental work had not even been printed at the time of the dates recorded in the book! Can you imagine the feelings of that supposedly reputable scientist when that evidence was presented?

Like the war-time spy the “game” is not without its thrills. I have participated in tracing down the facts in legal cases where not one million dollars but twenty million dollars was involved. I have had not one detective watch me, but nine detectivesâ€”three to a shift, three shifts a dayâ€” and have eluded them to go about my business of hunting up prospective witnesses. I have tried to get the essential facts from men who knew the truth, but who feared being murdered (I do not know how rightfully) if the truth were told. I have had my car forced to the side of a muchly traveled road and in less than two minutes been terribly beaten up by four negro hirelings of the company I was then investigating, and none too politely been told to get out of town. I have escaped from traps that have been set for me, sometimes because I was cautious, often for no other apparent reason than that “Lady Luck” was smiling at me.

Detectives have registered at hotels in my name for the purpose of getting my mail. My brief case has been stolen as baggage was being unloaded from a train, and recovered only after a flying tackle on my part that brought down the “detective thief.” . . . Sounds like fiction, doesn’t it? But more often than we think, truth is stranger than fiction!