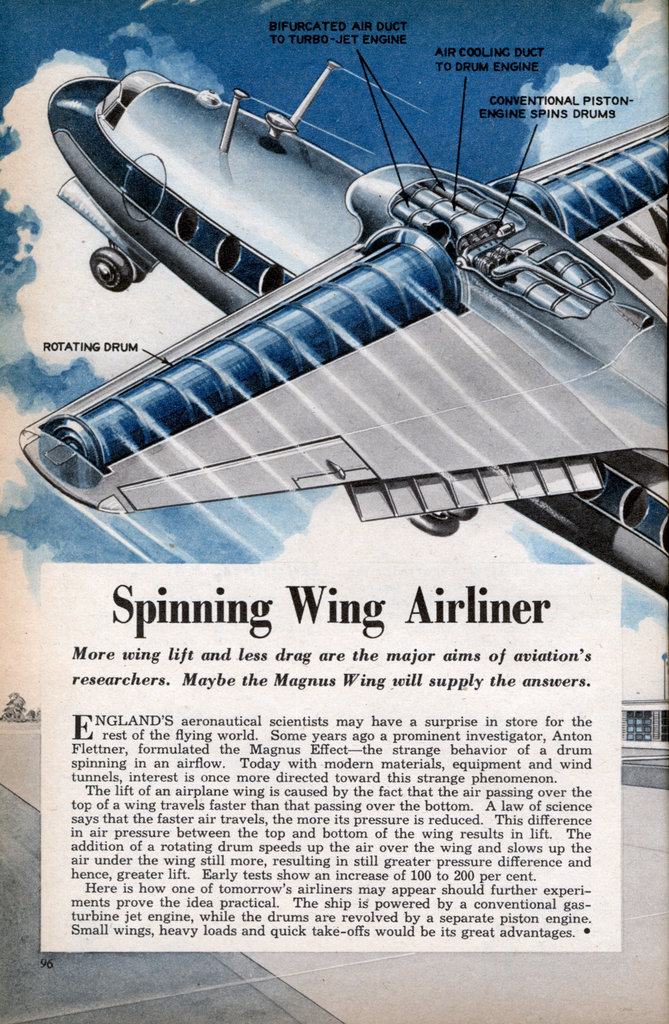 More wing lift and less drag are the major aims of aviation’s researchers. Maybe the Magnus Wing will supply the answers.

ENGLAND’S aeronautical scientists may have a surprise in store for the rest of the flying world. Some years ago a prominent investigator, Anton Flettner, formulated the Magnus Effectâ€”the strange behavior of a drum spinning in an airflow. Today with modern materials, equipment and wind tunnels, interest is once more directed toward this strange phenomenon.

The lift of an airplane wing is caused by the fact that the air passing over the top of a wing travels faster than that passing over the bottom. A law of science says that the faster air travels, the more its pressure is reduced. This difference in air pressure between the top and bottom of the wing results in lift. The addition of a rotating drum speeds up the air over the wing and slows up the air under the wing still more, resulting in still greater pressure difference and hence, greater lift. Early tests show an increase of 100 to 200 per cent.

Here is how one of tomorrow’s airliners may appear should further experiments prove the idea practical. The ship is powered by a conventional gas-turbine jet engine, while the drums are revolved by a separate piston engine. Small wings, heavy loads and quick take-offs would be its great advantages.