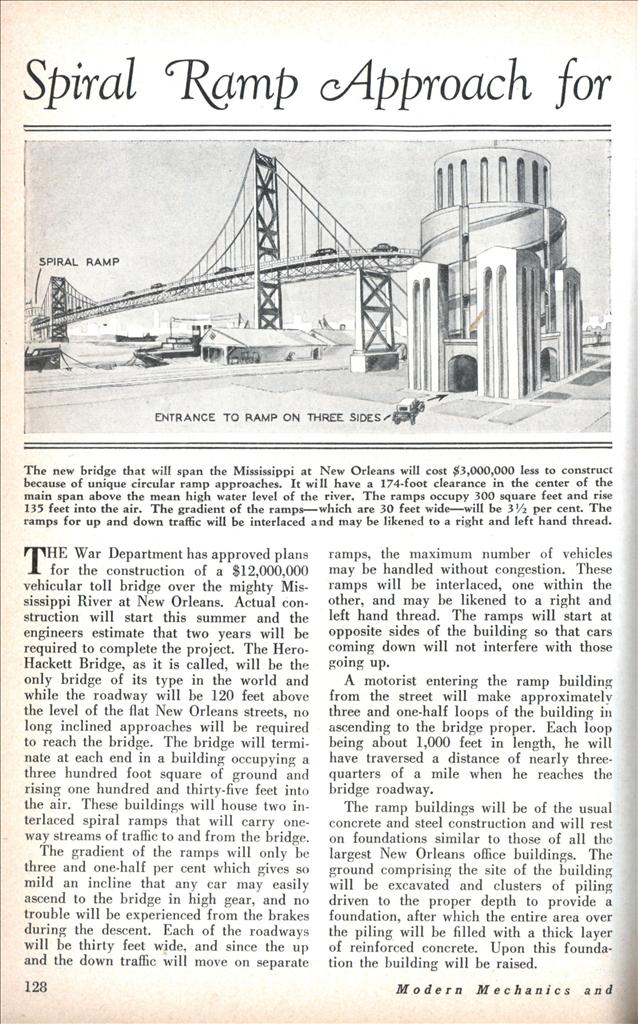 THE War Department has approved plans for the construction of a $12,000,000 vehicular toll bridge over the mighty Mississippi River at New Orleans. Actual construction will start this summer and the engineers estimate that two years will be required to complete the project. The Hero-Hackett Bridge, as it is called, will be the only bridge of its type in the world and while the roadway will be 120 feet above the level of the flat New Orleans streets, no long inclined approaches will be required to reach the bridge. The bridge will terminate at each end in a building occupying a three hundred foot square of ground and rising one hundred and thirty-five feet into the air. These buildings will house two interlaced spiral ramps that will carry oneway streams of traffic to and from the bridge.

The gradient of the ramps will only be three and one-half per cent which gives so mild an incline that any car may easily ascend to the bridge in high gear, and no trouble will be experienced from the brakes during the descent. Each of the roadways will be thirty feet wide, and since the up and the down traffic will move on separate ramps, the maximum number of vehicles may be handled without congestion. These ramps will be interlaced, one within the other, and may be likened to a right and left hand thread. The ramps will start at opposite sides of the building so that cars coming down will not interfere with those going up.

A motorist entering the ramp building from the street will make approximately three and one-half loops of the building in ascending to the bridge proper. Each loop being about 1,000 feet in length, he will have traversed a distance of nearly three-quarters of a mile when he reaches the bridge roadway.

The ramp buildings will be of the usual concrete and steel construction and will rest on foundations similar to those of all the largest New Orleans office buildings. The ground comprising the site of the building will be excavated and clusters of piling driven to the proper depth to provide a foundation, after which the entire area over the piling will be filled with a thick layer of reinforced concrete. Upon this foundation the building will be raised.

High speed elevators and stairways will be installed in the space within the ramp circles for the use of the pedestrian traffic of the bridge.

The ramp buildings will serve a dual purpose as in addition to eliminating the long approaches, which would necessitate a large amount of real estate, they will provide a firm anchorage for the bridge structure and cables.

The bridge proper will consist of two 800-foot approach spans reaching from the ramp buildings to enormous bridge piers. These concrete and steel piers will be 125 feet wide and 60 feet thick at the base. They will be imbedded in a stratum of hard packed sand some 200 feet beneath the bed of the Mississippi River. The piers will be built in sections and sunk into the river bed by their own weight and the action of high pressure water jets. When completed these piers will rise 350 feet above the low water level of the river. Between them a single 1760-foot span will be built across the main channel of the Mississippi River, making the total length of the bridge 3360 feet between the two ramp buildings.

In designing the bridge the engineers have borne in mind the immense river traffic which New Orleans enjoys as the second port of the United States. The bridge will have 174 feet clearance in the center of the main span above the mean high water level of the river. This is ample to allow the largest liners to pass under the bridge with ease.

The bridge was designed by the nationally known New Orleans engineer, Allen S. Hackett and takes its name from Mr. Hackett and his partner in the project, Col. George A. Hero, a New Orleans capitalist. The spiral ramp is a distinct departure from the usual type of bridge approach. Its use will permit the construction of high clearance bridges in congested areas where long inclined approaches would require so large an amount of high priced real estate as to make their cost prohibitive. The designers of the Hero-Hackett Bridge estimate they will save the city of New Orleans and the state and national government over $3,000, 000 due to their circular ramp approaches.