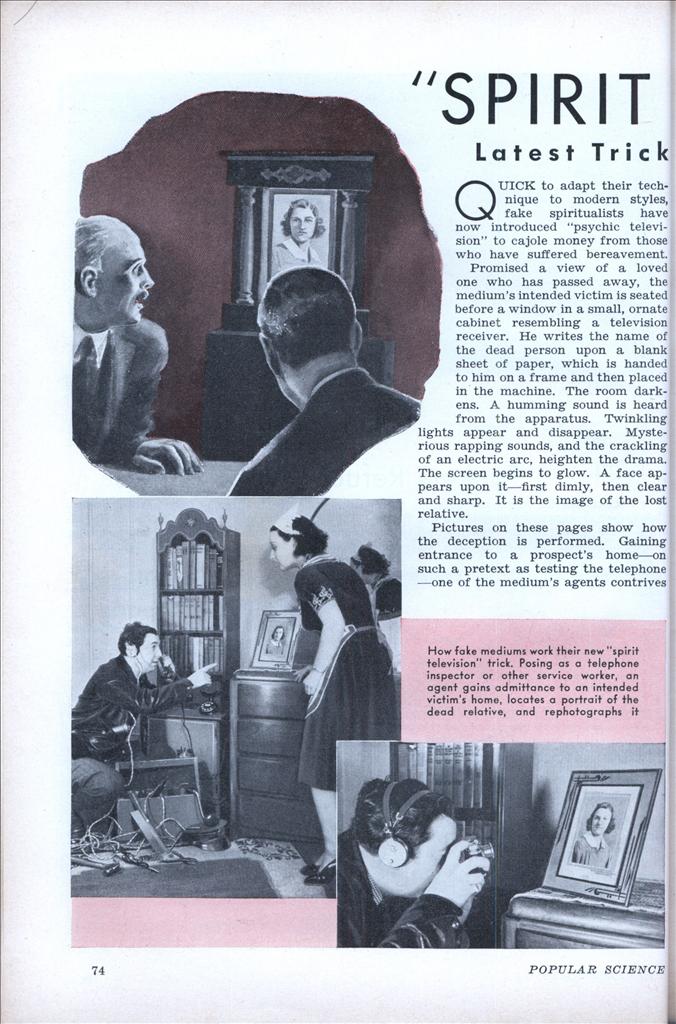 QUICK to adapt their technique to modern styles, fake spiritualists have now introduced “psychic television” to cajole money from those who have suffered bereavement. Promised a view of a loved one who has passed away, the medium’s intended victim is seated before a window in a small, ornate cabinet resembling a television receiver. He writes the name of the dead person upon a blank sheet of paper, which is handed to him on a frame and then placed in the machine. The room darkens. A humming sound is heard from the apparatus. Twinkling lights appear and disappear. Mysterious rapping sounds, and the crackling of an electric arc, heighten the drama. The screen begins to glow. A face appears upon itâ€”first dimly, then clear and sharp. It is the image of the lost relative.

Pictures on these pages show how the deception is performed. Gaining entrance to a prospect’s homeâ€”on such a pretext as testing the telephone â€”one of the medium’s agents contrives to find and rephotograph a portrait of the member of the family who has died. A trick frame makes it easy for the medium to insert an enlargement in the “television” machine along with the blank paper, which serves as a screen. Illuminated from the rear, the photograph is drawn . forward along a track toward the screen by a concealed thread, so that it gradually becomes more clearly defined. The rest of the apparatusâ€”lights, arc, and humming motorâ€”is simply for “atmosphere.” Glib-tongued showmanship, aided by what the medium and his agent have been able to learn about the deceased through secret investigation, help make the fraud convincing enough to yield rich returns.

This series of photographs, made with the cooperation of Sam Grossman, of the Society of American Magicians, is designed to protect the public by exposing the methods used in this heartless exploitation of grief.