This is a bizzare article about people and household objects that suddenly become radio receivers. It reminds me a lot of the the movie Real Genius, where poor Kent has his braces turned into a radio antenna.

My question is: Does this really happen? Can my bathtub suddenly start singing to me? 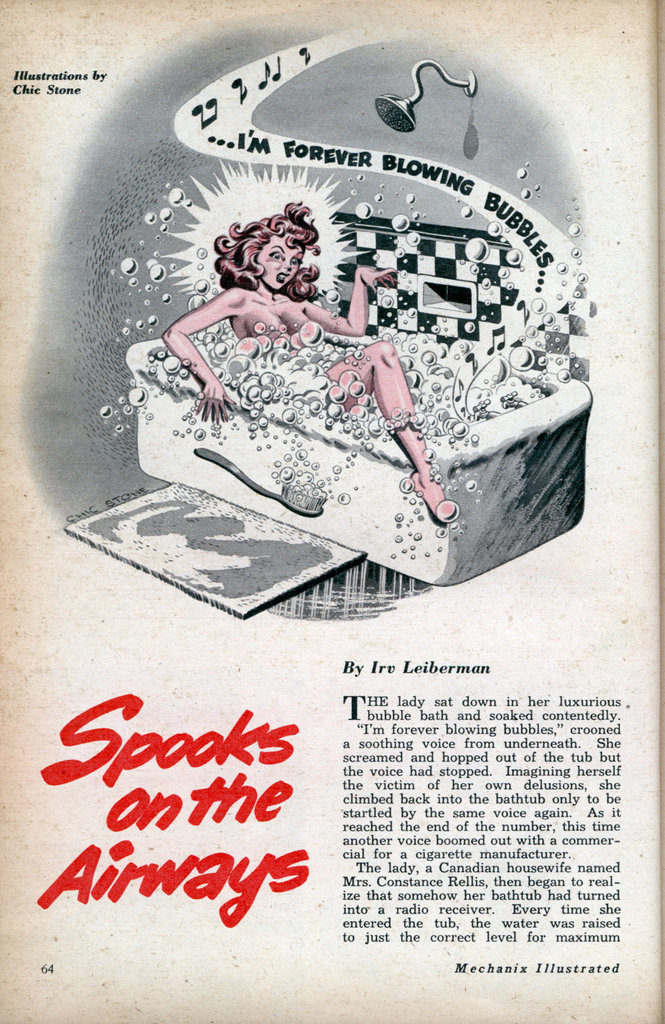 Spooks on the Airways

THE lady sat down in her luxurious bubble bath and soaked contentedly. “I’m forever blowing bubbles,” crooned a soothing voice from underneath. She screamed and hopped out of the tub but the voice had stopped. Imagining herself the victim of her own delusions, she climbed back into the bathtub only to be startled by the same voice again. As it reached the end of the number, this time another voice boomed out with a commercial for a cigarette manufacturer.

The lady, a Canadian housewife named Mrs. Constance Rellis, then began to realize that somehow her bathtub had turned into a radio receiver. Every time she entered the tub, the water was raised to just the correct level for maximum receptionâ€”giving her the only crooning bathtub in the world.

Yes, radio waves have manifested themselves in many weird and freakish ways. The technical explanation for these spooks on the airways is usually that an oxidized or rusty metal surface “rectifies” the powerful electro-magnetic waves, turning them into sound waves. And a rusty section of the tub was responsible for the crooning bubbles in the above case.

It has been found that a great majority of these incidents occur within a half mile of a radio station. Many cases have been reported where metal objects within this area were able to pick up carrier current. For example, a Gushing, Oklahoma resident doesn’t require a radio for his evening listening pleasure. He merely places his ear against an iron fence post, settles back, and lets WKY do the rest.

Then there’s the case of John Morskowsky, a New York workman who thought he was ready for a psychiatrist. Every day as he walked to and from work he heard voices saying all sorts of nonsensical things. Just as he was about to consult a brain specialist, he realized that the phenomenon occurred only when he was near WOR’s transmitter. Investigation disclosed that the machine shop in which he worked was filled with emery dust, and whenever grains of the dust in his mouth came in contact with the fillings in his teeth, they operated like an old-fashioned crystal pickup.

Acting on the knowledge that the human body is an electrochemical mechanism, a Harvard University psychologist performed an experiment not long ago to prove that his body could be made to act like a radio receiver. He filled one ear with salt water, inserted a piece of wire into the water and strapped a second piece of wire to another part of his body. Seconds later he succeeded in receiving radio signals.

A California housewife, Mrs. Albert Clark, was going to have guests for dinner. As she started to cook on her electric range, the clear, dulcet tones of a Schubert melody filled the kitchen. She called in her neighbors to witness the strange performance and by the time they arrived, a crisp voice from the stove was giving advice to housewives.

Another similar incident happened in Jackson Heights, New York. One morning, after a gay and alcoholic night before, a man wearily trudged into the bathroom to shave. He was just about deciding to jump back into bed and forget about work that day when a disgustingly wide-awake voice shouted “Look sharp! Be sharp! Use . . .” The poor fellow almost fainted. Engineersn later blamed it on a peculiar arrangement of lead on the glass and tin in the cabinet.

The list of objects that have suddenly become radio receivers would amaze you. The record shows there have been musical furnaces, talking bedsprings and water faucets and barnyard wells that have suddenly developed conversational abilities. On the other hand, receiving sets have turned into telephones, and loudspeakers have blared intimate phone conversations.

There’s the case of the radio audience of a western city which was shocked one Sunday evening when the music of a well-known orchestra faded and a conversation between a husband and wife boomed from the loudspeakers. “Well, where did you go this time?” the wife asked.

“It’s none of your d . . .” replied the husband as his voice drifted away and the music returned.

Reports of telephones picking up radio broadcasts and radio sets picking up such telephone conversations were far more common in the early days of broadcasting, and utility engineers have now almost eliminated these occurrences. The above case was due to a mechanical failure in local telephone circuits and was not heard over the network.

A radio furnace was a feature in the home of a New York businessman. Without the aid of radio equipment, the furnace reproduced programs clearly and conscientiously. Volume was controlled by the smoke-pipe damper. A Seattle lawyer recently reported that he owned a singing bed. The bed had not always been talented, however. It was only after a new transmitter went into action near the attorney’s home that it began to hit high C. Rusty springs, sensitive to resonance, were responsible.

An unusual case a number of years ago involved Martin Bodker, a Enumclaw, Washington rancher. One day, while talking with his neighbors, he switched on his radio. To the consternation of his visitors, his-face suddenly grew pale, his head bobbed crazily and his eyes became glassy. To cure this condition, Bodker went, not to a doctor, but to a radio engineer who explained it this way:

“Bodker’s body offers far more resistance to electric and radio waves than the average body. It offers so much resistance that it stores up electricity, and this is discharged at intervals with such rapidity that he is upset.”

To alleviate Bodker’s trouble, the engineer wound a walking stick with copper wire which he grounded in a coffee can of water. When the “human radio” held this, it gave him about 50 per cent relief. A portable condenser was built for him to drain the charge off his body and this made him normally resistant.

Recently there was a report from Czechoslovakia that two young factory workers, after vigorous breathing exercises, could turn themselves into human receiving sets. Holding the terminal ends of a loudspeaker in their hands, these men could bring in the programs of a distant station in full volume. Although the breathing exercises seemed to be essential to the demonstration, no European scientist could explain this phenomenon.

Aerial antics are frequently caused by short-wave stations. Many transmissions have been picked up on electronic devices, such as electric organs and even “talkie” amplifiers in movie theaters. In Chicago, the leader of a five-piece night-club orchestra stepped up to play a solo on his electric guitar. Before he could strike a note, the instrument began spouting news bulletins to the dancers.

Imagine the expression on the face of a farmer near Edmonton, Alberta, one morning when he lifted the cover of his well and was greeted by orchestra music. Astonished, he dropped the cover and the music stopped. He lifted the cover again and the music resumed. He excitedly reported the incident and soon police and neighbors were at the scene to hear the musical well perform. The theory was advanced that it was caused by a radio grounded in a nearby stream. But the farmer didn’t own a radio. However, his nearest neighbor did, and when his set was silenced, so was the musical well.

Behind these weird occurrences are some factors that are known to radio engineers and others that still remain mysteries. In fact, some happenings throw doubt on existing theories of electronic and magnetic-wave behavior. An excellent illustration of this occurred not long ago when the reception of distorted telecasts from London by experimenters on Long Island and as far west as Arizona led to a revision of frequencies.

Perhaps the strangest “ghost” story occurred a few months ago in Cleveland, Ohio. Fire Chief Carl Ehrler was returning from a fire when he was notified on short-wave radio by the Cleveland dispatcher to go to the scene of another blaze. Just then a voice ordered him to “2620 Lake View Terrace.”

“There isn’t any such address,” Ehrler replied in a puzzled voice.

“Mean to tell me I don’t know Los Angeles?” replied the voice.

“Maybe so,” Ehrler answered, grinning now, “but this is Cleveland.” A spook on the airways had brought the two widely separated departments together!