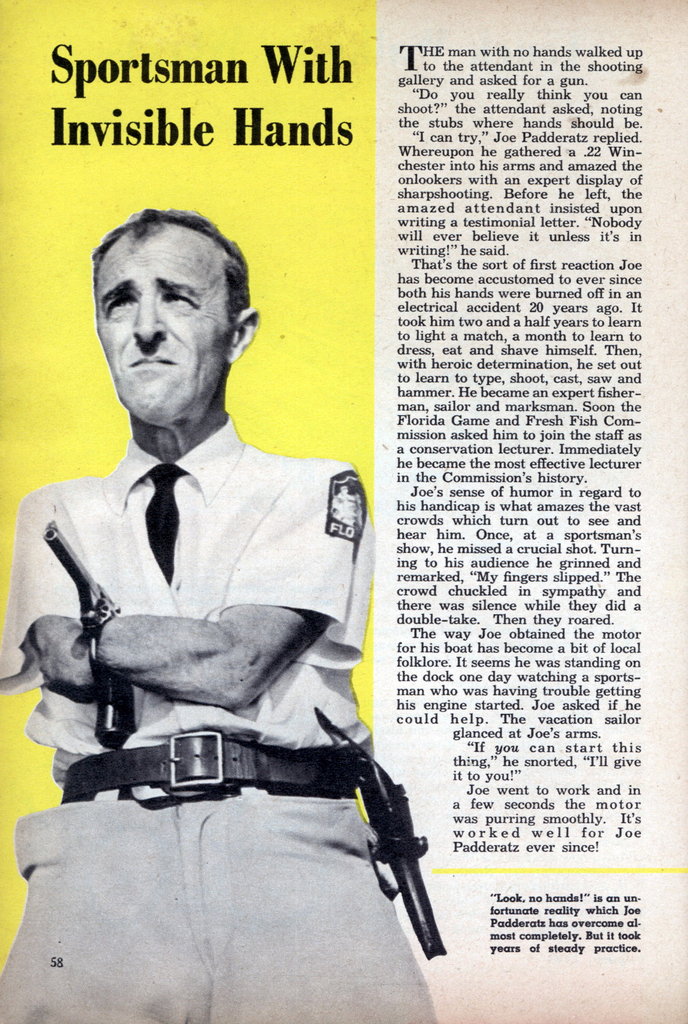 THE man with no hands walked up to the attendant in the shooting gallery and asked for a gun.

“Do you really think you can shoot?” the attendant asked, noting the stubs where hands should be.

“I can try,” Joe Padderatz replied. Whereupon he gathered a .22 Winchester into his arms and amazed the onlookers with an expert display of sharpshooting. Before he left, the amazed attendant insisted upon writing a testimonial letter. “Nobody will ever believe it unless it’s in writing!” he said.

That’s the sort of first reaction Joe has become accustomed to ever since both his hands were burned off in an electrical accident 20 years ago. It took him two and a half years to learn to light a match, a month to learn to dress, eat and shave himself. Then, with heroic determination, he set out to learn to type, shoot, cast, saw and hammer. He became an expert fisherman, sailor and marksman. Soon the Florida Game and Fresh Fish Commission asked him to join the staff as a conservation lecturer. Immediately he became the most effective lecturer in the Commission’s history.

Joe’s sense of humor in regard to his handicap is what amazes the vast crowds which turn out to see and hear him. Once, at a sportsman’s show, he missed a crucial shot. Turning to his audience he grinned and remarked, “My fingers slipped.” The crowd chuckled in sympathy and there was silence while they did a double-take. Then they roared.

The way Joe obtained the motor for his boat has become a bit of local folklore. It seems he was standing on the dock one day watching a sportsman who was having trouble getting his engine started. Joe asked if he could help. The vacation sailor glanced at Joe’s arms.

Joe went to work and in a few seconds the motor was purring smoothly. It’s worked well for Joe Padderatz ever since!