What a great name. I’d never heard of Spudnuts before reading this but now I’m curious to try them. They seem to still be around. 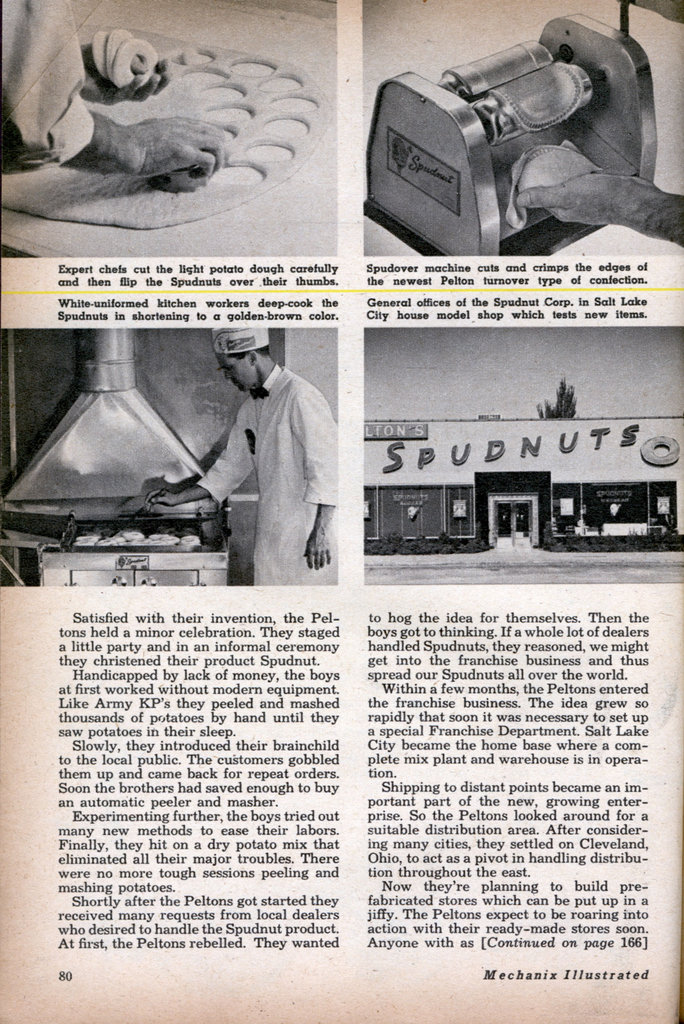 Don’t say doughnuts to the Pelton brothers, say Spudnuts. They glamorized the lowly spud and made themselves a fortune in the process.

AL and Bob Pelton were suckers for sinkersâ€”doughnuts, that is. They’d eaten glazed doughnuts, chocolate covered doughnuts and just plain doughnuts. They were also eager to make lots of money and doughnuts got them to thinking.

“Why can’t we invent a new kind of doughnut?” Al said one day over a cup of coffee and a doughnut. Just like that.

Today, the brothers Pelton never mention the word doughnut. Say Spudnut and you’ll draw a smile from them, though. For they’re out to supplant the common doughnut with their million-dollar ideaâ€”a delicious potato pastry.

As a matter of fact, the Peltons are now selling more than three-quarters of a million dozen Spudnuts per month. To date they’ve franchised 350 shops throughout the United States, Canada, Alaska and Hawaii.

When the brothers hit on the Spudnut idea, they spent endless hours planning on how to get started. If they could introduce their product they felt that they could certainly earn more money than they were getting at their respective jobs as electrical-appliance salesman and drugstore clerk.

Between them they had $75 in cash. That was enough to rent a tiny store. There, they started to work out their formulaâ€”dough tastefully flavored with potato water. The idea failed. They thought for awhile that they were washed up and their big dream shattered.

Undaunted, they continued to experiment. This time they tried mashed-potato doughnuts. After making a batch, they passed out a few samples among friends. The golden brown potato doughnuts looked attractive and the folks liked the taste of this product. Even the smell was wonderful. Everyone, who sampled the doughnuts liked them.

Satisfied with their invention, the Peltons held a minor celebration. They staged a little party and in an informal ceremony they christened their product Spudnut.

Handicapped by lack of money, the boys at first worked without modern equipment. Like Army KP’s they peeled and mashed thousands of potatoes by hand until they saw potatoes in their sleep.

Slowly, they introduced their brainchild to the local public. The customers gobbled them up and came back for repeat orders. Soon the brothers had saved enough to buy an automatic peeler and masher.

Experimenting further, the boys tried out many new methods to ease their labors. Finally, they hit on a dry potato mix that eliminated all their major troubles. There were no more tough sessions peeling and mashing potatoes.

Shortly after the Peltons got started they received many requests from local dealers who desired to handle the Spudnut product. At first, the Peltons rebelled. They wanted to hog the idea for themselves. Then the boys got to thinking. If a whole lot of dealers handled Spudnuts, they reasoned, we might get into the franchise business and thus spread our Spudnuts all over the world.

Within a few months, the Peltons entered the franchise business. The idea grew so rapidly that soon it was necessary to set up a special Franchise Department. Salt Lake City became the home base where a complete mix plant and warehouse is in operation.

Shipping to distant points became an important part of the new, growing enterprise. So the Peltons looked around for a suitable distribution area. After considering many cities, they settled on Cleveland, Ohio, to act as a pivot in handling distribution throughout the east.

Now they’re planning to build prefabricated stores which can be put up in a jiffy. The Peltons expect to be roaring into action with their ready-made stores soon. Anyone with as little as $1,750 can get started with a Spudnut Shop. For this money, the Peltons furnish a franchise and all the necessary production equipment.

Of course, the new operator must set up and pay for the decoration of his store. On the whole, the average Spudnut Shop costs $5,000 to open up for business.

Included in cost of a franchise is a half ton of mixâ€”ten 100-pound bags, enough to produce 1,680 dozen Spudnuts. With Spudnuts selling at 50c a dozen, this represents $840 of the initial franchise fee back.

There’s no stopping the brothers now. And should you ever meet them, remember, don’t mention the word doughnut. They abhor it. In fact, they’re working on a little deal right now with a guy named Websterâ€”they want to replace the word doughnut with Spudnut in the dictionary.