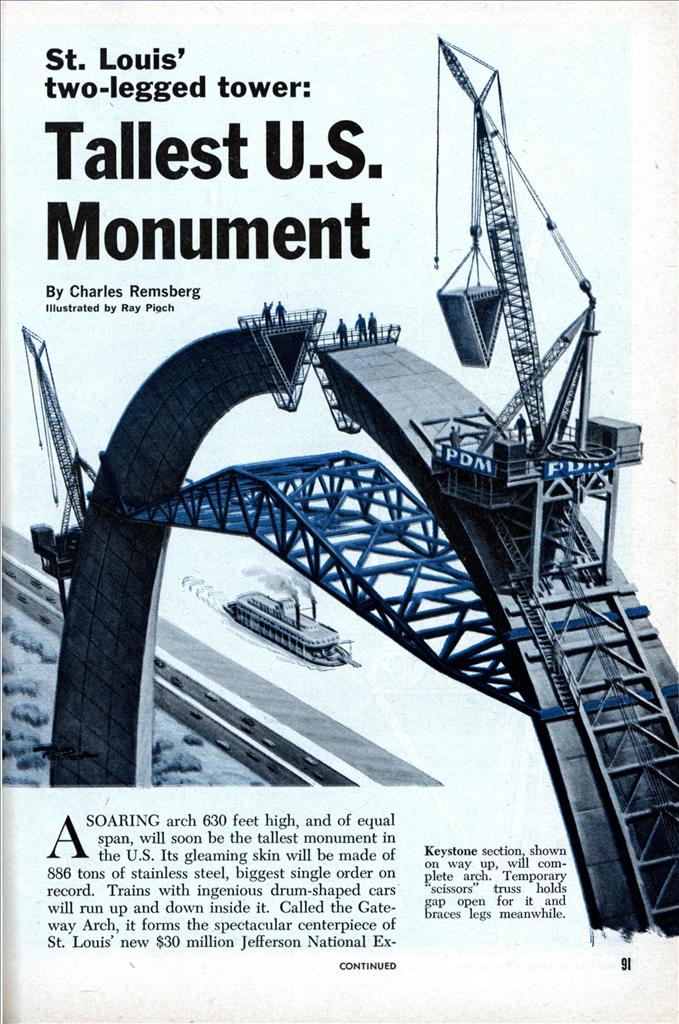 A SOARING arch 630 feet high, and of equal span, will soon be the tallest monument in the U.S. Its gleaming skin will be made of 886 tons of stainless steel, biggest single order on record. Trains with ingenious drum-shaped cars will run up and down inside it. Called the Gateway Arch, it forms the spectacular centerpiece of St. Louis’ new $30 million Jefferson National Ex- pansion Memorial Park. It symbolizes the city’s role as the gateway to the West after the Louisiana Purchase of 1803.

Now under construction, the Gateway Arch will rise even higher than the 555-foot Washington Monument or the 302-foot Statue of Liberty when completed next year. Throughout its span the hollow structure will have the shape, in cross section, of an equilateral triangle, whose sides increase in exterior length from 17 feet at the top to 54 feet at each base.

Room at the top. Visitors to the shining arch, which will be visible 30 miles away, will be able to look back over the same 30 miles: from a portholed observation gallery at its crown. To lift sightseers to this height, conventional elevators were ruled out by the arch’s curving shape. So a brand-new form of vertical transportation is being provided.

You’ll ride aloft in a train consisting of eight five-passenger cars, propelled by a lifting cable and running along a track built into the structure. Each drumlike car hangs, free to rotate, in bearings at front and rear. Its below-center weight keeps it upright, like a seat on a Ferris wheel, during the 2-1/2-minute ascent at just under four m.p.h.

Disembarking at the top of the arch, you’ll pass through the observation gallery—and then ride down the other leg, in a “down” train just like the “up” one. (When traffic is light, each train may carry passengers both up and down.) If you’re too timorous to ride in the trains, you may ascend as far as the 370-foot level—more than halfway up—in an elevator especially designed to operate in a slanted shaft. You’ll have to complete the ascent under your own power, via stairs, which extend all the way up and down each leg.

Creator of the Gateway Arch’s design was the late Eero Saarinen, famous Finnish-born architect, whose plans for it won a $50,000 competition in 1947. The arch derives its support entirely from its double wall—a quarter-inch-thick skin of polished stainless-steel plates bolted to a 3/8-inch-thick interior wall of carbon steel. An intervening space, of up to three feet at the base, is filled with concrete to a height of 300 feet. Extending 60 feet below ground, the legs are embedded in 26,000 tons of concrete keyed to bedrock. Thus braced, the two-legged tower needs no other supporting members. It’s said to be strong enough to withstand a wind of 155 m.p.h. or more.

Underground museum. Between the legs of the 16,878-ton arch, a sunken entrance will open into a 100,000-square-foot underground center for visitors, nearly the length of two football fields. Its attractions will include a museum, where more than 200 exhibits will tell the story of westward expansion, and theaters showing documentary films of the $12,000,000 Gateway Arch’s construction. By way of this center, visitors reach the arch’s trains, elevators, and stairs.

A creeping derrick, the 100-ton monster that’s currently lifting the triangular sections of each leg into place, lays its own temporary track up the outside of the leg—and climbs as it builds. On a “moving day” the chief rigger, aloft, signals an operator in a four-drum hoist shack on the ground—and a multisheave system inches the whole derrick upward, to a level 50 feet above the last. Then five-inch steel pins make it fast. Telescoping struts beneath its steel deck, adjusted by hydraulic jacks, keep the deck level despite the constantly changing curvature of the rising leg. The same ground-based hoisting engine powers the derrick’s own lifting cables.

When the arch’s two legs have almost met, they’ll be joined by hoisting into place an eight-ton “keystone” section of the arch—its 143rd and last piece.

A 91-acre park, newly laid out on the west bank of the Mississippi at the location of St. Louis’ first settlement, provides the site for the towering monument. It took some engineering, itself. An old railroad trestle along the nearby shorefront, considered out of keeping with the scenic plan, has vanished. Through 960 feet of new tunnels and cuts that replace it, the trains will rumble past below ground level, unseen by the Memorial Park’s expected 2-1/2 million visitors a year.