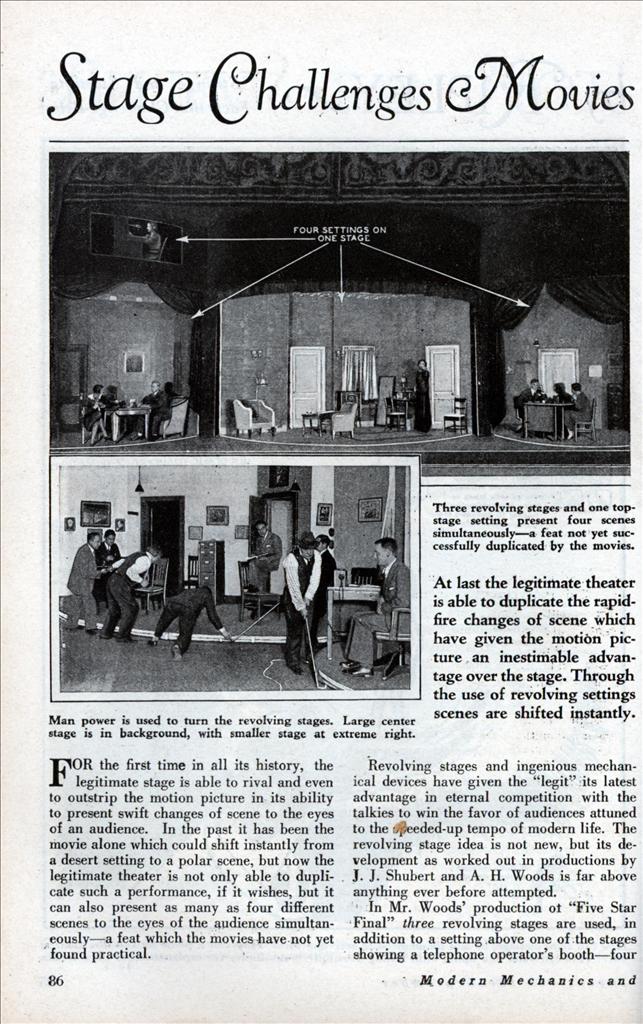 FOR the first time in all its history, the legitimate stage is able to rival and even to outstrip the motion picture in its ability to present swift changes of scene to the eyes of an audience. In the past it has been the movie alone which could shift instantly from a desert setting to a polar scene, but now the legitimate theater is not only able to duplicate such a performance, if it wishes, but it can also present as many as four different scenes to the eyes of the audience simultaneously—a feat which the movies have not yet found practical.

Revolving stages and ingenious mechanical devices have given the “legit” its latest advantage in eternal competition with the talkies to win the favor of audiences attuned to the speeded-up tempo of modern life. The revolving stage idea is not new, but its development as worked out in productions by J. J. Shubert and A. H. Woods is far above anything ever before attempted.

In Mr. Woods’ production of “Five Star Final” three revolving stages are used, in addition to a setting above one of the stages showing a telephone operator’s booth—four scenes, all presented at the same instant. In the Shubert production of the operettas ‘Three Little Girls” and “A Wonderful Night,” only one revolving stage is used, but it is so huge that it is turned by electric power, and can be disassembled for shipment—the only portable stage of its type ever built.

Simple as the idea of a revolving stage appears, countless obstacles had to be overcome. P. Dodd Ackerman designed the stages for “Five Star Final.” He found that he could use three stages, a center one of 23-foot diameter, and two side stages of 13 feet. But the usual method of stage lighting, in which cables for electric current are laid on the stage floor, would not suffice, since the revolving of the stages would wind up the cables. This complication was solved by running the lines through a hollow pivot at the center of each stage. Dimensions of the theater had to be carefully checked up to make sure that the stages did not conceal the action from any part of the audience. Silent tracks were devised to make the revolving of the settings absolutely soundproof.

Each of the three stages was provided with a separate curtain, and each was divided into three sections, like a pie cut into three equal parts. While one section is presented to the audience, stage hands change the settings on the two sections which are backstage. The curtain is dropped; strong arms pull the revolving stage around—and presto! The section which a moment before was presented to the audience is backstage and is being converted from an apartment room to a beer garden, while the action of the play is being carried on in one of the other segments of the stage.

With three separate stages, each divided into three sections, and an additional setting on top of one of them—viewed through a screen—the rapid-fire changes of action which can be presented are numberless. Usually only one or two stages are in use at the same moment, but when the action calls for it they can all be brought into service.

The “Five Star Final” revolving stages rest on the floor of the main stage, and are turned around on wheeled tracks. The Shubert portable revolving stage is mechanically more complicated. It can be likened in its operation to a huge phonograph disk, revolving on an axis which extends downward through the regular theater stage floor, connecting with a huge motor in the cellar. One man controls the turntable in response to buzzer signals from the stage manager.

In the second act of “A Wonderful Night” the entire seven scenes are set on the turntable ‘ at one time. The scenery used is double; that is, painted on both sides. When the scene is shifted the curtain is not lowered, but assumes something of the aspect of a motion picture screen, in which the characters walk from one room to another in full view of the audience. In one act the audience sees a group of characters step from a room, reappear in a street, continue down a moonlit lane and enter a cafe, in natural movement and in correct elapsed time. James H. Surridge, chief of the Shubert mechanical forces, supervised the construction of this remarkable stage.

Other ingenious stages have been used by theaters to overcome the limitations of the usual opera house. The Boston Opera has hydraulic stage worked somewhat like an elevator.