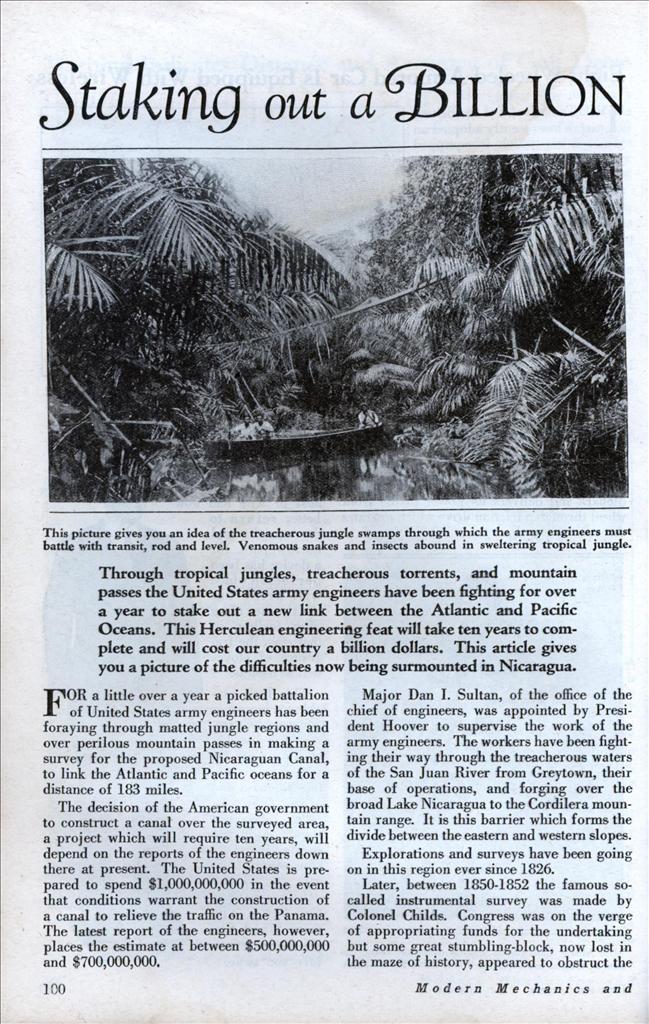 Staking out a Billion Dollar Canal

Through tropical jungles, treacherous torrents, and mountain passes the United States army engineers have been fighting for over a year to stake out a new link between the Atlantic and Pacific Oceans. This Herculean engineering feat will take ten years to complete and will cost our country a billion dollars. This article gives you a picture of the difficulties now being surmounted in Nicaragua.

FOR a little over a year a picked battalion of United States army engineers has been foraying through matted jungle regions and over perilous mountain passes in making a survey for the proposed Nicaraguan Canal, to link the Atlantic and Pacific oceans for a distance of 183 miles.

The decision of the American government to construct a canal over the surveyed area, a project which will require ten years, will depend on the reports of the engineers down there at present. The United States is prepared to spend $1,000,000,000 in the event that conditions warrant the construction of a canal to relieve the traffic on the Panama. The latest report of the engineers, however, places the estimate at between $500,000,000 and $700,000,000.

Major Dan I. Sultan, of the office of the chief of engineers, was appointed by President Hoover to supervise the work of the army engineers. The workers have been fighting their way through the treacherous waters of the San Juan River from Greytown, their base of operations, and forging over the broad Lake Nicaragua to the Cordilera mountain range. It is this barrier which forms the divide between the eastern and western slopes.

Explorations and surveys have been going on in this region ever since 1826.

Later, between 1850-1852 the famous so-called instrumental survey was made by Colonel Childs. Congress was on the verge of appropriating funds for the undertaking but some great stumbling-block, now lost in the maze of history, appeared to obstruct the work and it was abandoned. As many as five other surveys followed. The data gathered during all of these is being availed of in the course of the present study.

According to the present proposals, the Atlantic end of the canal will be Greytown where two jetties and a harbor, two miles long, will be constructed. From there the Canal will run along the north side of the San Juan River, which would be changed into an arm, fifty miles long, to Lake Nicaragua. At Conchuda it is planned to have a dam.

Across Lake Nicaragua the engineers are making soundings and maps for a channel. This channel, which will be seventy miles long, will have to be dredged. Then it will pass through the continental divide, west of Lake Nicaragua, and dropped to the level of the Pacific Ocean by means of four locks, this distance being 16 miles.

Tentative plans call for a dredged harbor and a jetty at Brito on the Pacific side. The maximum elevation of Lake Nicaragua above sea level is about 110 feet. The lower part of the San Juan River is the boundary between Nicaragua and Costa Rica. It may be that this river may have to be dammed, thereby changing its natural flow characteristics. The survey has now been completed. Now the government’s Canal Board will study the advisability of entering on an engineering project which will require 20,000 men ten years to complete. Meanwhile, the army engineers, working as a unit entirely apart from the Marine Corps stationed in that politically-turbulent country, continue to record the topography and the character of the waterways by transit, rod and chain, leading a primitive existence amid tropic hazards, striv- ing to transplant to a land which never grew up the civilization of the North.

Aside from its commercial advantages, which a glance at the map will make apparent at once, the canal will more than pay for itself should this nation ever be threatened by one of the great naval powers. In event of hostilities, it is presumed that one of the first things attempted by the enemy would be the destruction of the Panama Canal locks, thus making it impossible to transfer the fleet from one coast to the other. With two canals, the probability of cutting this important link in communications would be cut in half. The Nicaragua Canal would also be easier to defend, owing to its topographical advantages.