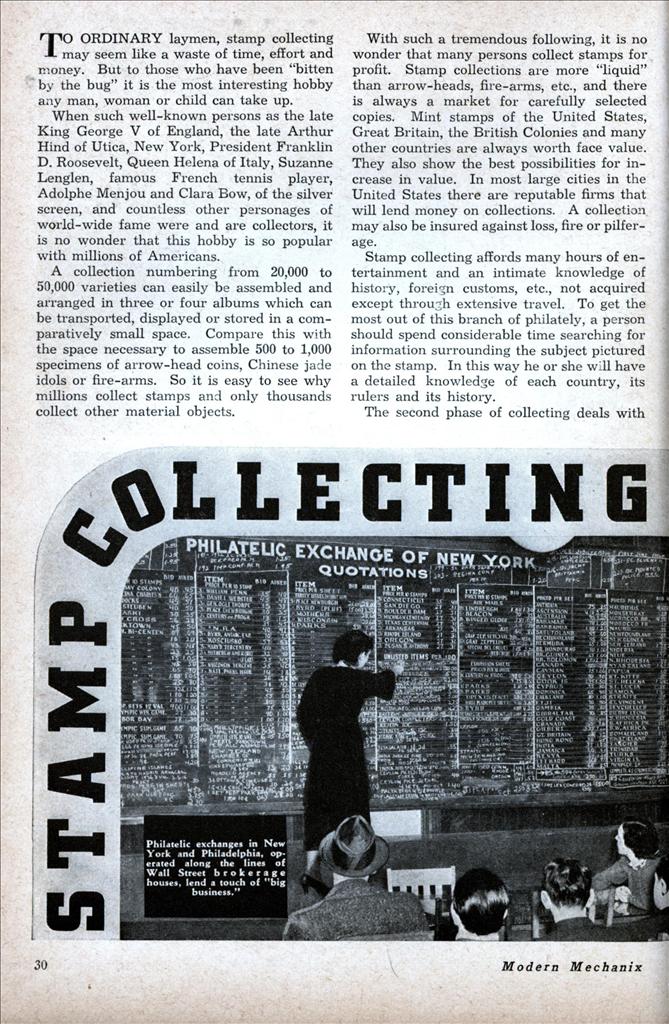 TO ORDINARY laymen, stamp collecting may seem like a waste of time, effort and money. But to those who have been “bitten by the bug” it is the most interesting hobby any man, woman or child can take up.

When such well-known persons as the late King George V of England, the late Arthur Hind of Utica, New York, President Franklin D. Roosevelt, Queen Helena of Italy, Suzanne Lenglen, famous French tennis player, Adolphe Menjou and Clara Bow, of the silver screen, and countless other personages of world-wide fame were and are collectors, it is no wonder that this hobby is so popular with millions of Americans.

A collection numbering from 20,000 to 50,000 varieties can easily be assembled and arranged in three or four albums which can be transported, displayed or stored in a comparatively small space. Compare this with the space necessary to assemble 500 to 1,000 specimens of arrow-head coins, Chinese jade idols or fire-arms. So it is easy to see why millions collect stamps and only thousands collect other material objects.

With such a tremendous following, it is no wonder that many persons collect stamps for profit. Stamp collections are more “liquid” than arrow-heads, fire-arms, etc., and there is always a market for carefully selected copies. Mint stamps of the United States, Great Britain, the British Colonies and many other countries are always worth face value. They also show the best possibilities for increase in value. In most large cities in the United States there are reputable firms that will lend money on collections. A collection may also be insured against loss, fire or pilferage.

Stamp collecting affords many hours of entertainment and an intimate knowledge of history, foreign customs, etc., not acquired except through extensive travel. To get the most out of this branch of philately, a person should spend considerable time searching for information surrounding the subject pictured on the stamp. In this way he or she will have a detailed knowledge of each country, its rulers and its history.

The second phase of collecting deals with the building of a collection for monetary profit. This branch also demands intensive study, but with an entirely different objective in mind.

Here a person may progress just as fast as his finances permit. A definite budget should be set up and followed religiously. To accomplish this purpose, a certain sum of money should be set aside each week or each month to purchase stamps. In this way cash will be on hand when the stamps wanted become available or additional copies can be secured.

Be patient. Scrutinize carefully before you buy. To make your collection of real cash value, each stamp should be of very fine or superb quality. Look for perfect centering, clearness of color, complete perforation (except in the case of imperforates or part-perforates), and light cancellation when a used copy is desired. Be sure to check perforations, watermarks and secret markings. These identification marks are important, as they determine the exact cataloging of specimen.

If there is any doubt as to the authenticity of the copy, do not buy it until you have definite proof. There are many specialists among the dealers in the business who are competent to verify issues. Always purchase stamps from a dealer whom you know to be trustworthy. If possible, select one through whom you will do most of your buying. It will familiarize him with your requirements, thereby enabling him to offer you better merchandise at more favorable prices.

To start a profitable collection it is advisable to pick a country or countries in which you are going to specialize. Then get singles of as many varieties as possible (preferably mint unless used copies catalog at a higher price), and start with issues which can be secured easily. If you are going to specialize in United States issues, get acquainted with your local postmaster. If the postal clerk is informed that stamps are being purchased for collection purposes he will usually search for well-centered copies for you.

After a fairly representative collection has been assembled, the next step is to start buying varieties, blocks of four, or even whole sheets, if funds permit.

When a single and a block of four are in your possession they should be mounted in neat style in a loose-leaf album. By doing this it will not be necessary constantly to change stamps from one album to another, thereby chancing damage. Sheets are easily rearranged.

After a good start has been made on more recent issues, a collector can work back on catalog numbers to acquire some of the older stamps and to complete sets with some of the higher priced items. A collection is usually valued by its number of completed sets of fine or superb stamps.

It is amazing how quickly a collection builds into sizeable proportions and monetary value, and it is gratifying to watch the values of various issues climb from year to year.

Dwelling for a few moments on U. S. issues, a study should be made of individual issues in order to determine which ones deserve the most attention. Commemorative stamps are always in demand and show the greatest possibilities for improved value.

Many commemoratives issued during the last decade have jumped in catalog value from two to ten times their face values. An outstanding example of increased value is the series of three Zeppelin stamps issued during 1930. These had a face value of 65c, $1.30 and $2.60, a total of $4.55. Today selling prices on these three stamps total $48.00 in mint or used condition with few sets available at this price. Another value that increased tremendously is the 50c Zeppelin stamp issued during the Chicago World’s Fair. In slightly over three years the price jumped to $4.00 for well-centered copies.

Another outstanding value is the 3c Bi-centennial issue. This was replaced by the present Washington stamp on June 16, 1932, after it had been on sale only a few months. Catalog price over face value has jumped 600%. Another stamp to watch is the Maryland Tercentenary issue released in 1934. This was printed in red instead of violet and was taken “off sale” in a short time because of confusion in some post offices.

It can readily be seen that careful study should be made of issues as they are released so that adequate copies may be secured before the philatelic agencies remove them from sale.

An outstanding example of popularity in recent issues is the “Farley Follies.” At first dealers and collectors refrained from buying because they felt that something had been “put over on them.” But soon after the issues were removed from sale at the Philatelic Agency in Washington, collectors and dealers realized that here was a set of issues which were bound to increase in value. Prices skyrocketed, and now it is almost impossible to secure a good set at less than $3.00.

Other U. S. issues which should receive intensive study and consideration are the air mails, parcel post issues, special delivery and revenues.

Another branch of philately which a collector should investigate is “covers.” These are envelopes which have been postally used. They have a stamp affixed which is “tied” to the cover by a cancellation. Stamps should not be removed from “covers” until their value has been determined so affixed. Many valuable stamps have been dis- covered in old trunks in attics. Old correspondence sometimes contains “covers” of high value and careful search should be made to discover these rarities.

Practically the same possibilities for profit exist with issues from foreign countries if a collector will make a study of releases, quantities and condition of the stamps he purchases. This is of vital importance if the greatest profits are to be realized from investments in philately.

Next to the United States issues, perhaps the greatest possibilities for profit exist with Great Britain and British Colonies. This monarchy and its colonies do not make it a practice to foist issues on dealers and collectors to fatten their treasury. It will be found that mint copies of these releases increase in value faster than do used copies.

The increased popularity of Great Britain and British Colonial stamps is especially noticeable in the Silver Jubilee issues released during 1935. In most cases these were bi-colored stamps of the large size which form a beautiful addition to any collection. These stamps were on sale only a short time and were soon exhausted. In two years’ time most values have increased 300% to 500%.

On the subject of British Colonies, we find that the most popular are Australia, Canada, Newfoundland, New Zealand and Union of South Africa. Individual colonies in these dominions supply their own postal adhesives, so a collector will find the British Empire a fertile field for study and profit.

Another classification which demands study is “dead” countries—nations which have passed out of existence through conquest or absorption. Latest of these is Abyssinia, or Ethiopia, as we have learned to call it from newspaper reports.

In September, 1935, Italy invaded Ethiopia and by April, 1936, had conquered a territory approximately as large as the states of Texas and Oklahoma combined. Shortly after the successful campaign Premier Mussolini proclaimed Abyssinia to be part of Italy. New stamps have been issued to supplant those which were being used at the start of the conquest.

It is reported that at the time of fleeing from Ethiopia, Emperor Haile Selassie took with him all available stamps which had not been sent out to the various post offices. This is one country on which a collector-for-profit may safely make an investment, because values are bound to rise.