Modern Mechanix
Issue: Mar, 1930
Posted in: Animals For Profit, Entertainment
No Comments on Star Actors of the Flea Circus (Mar, 1930) 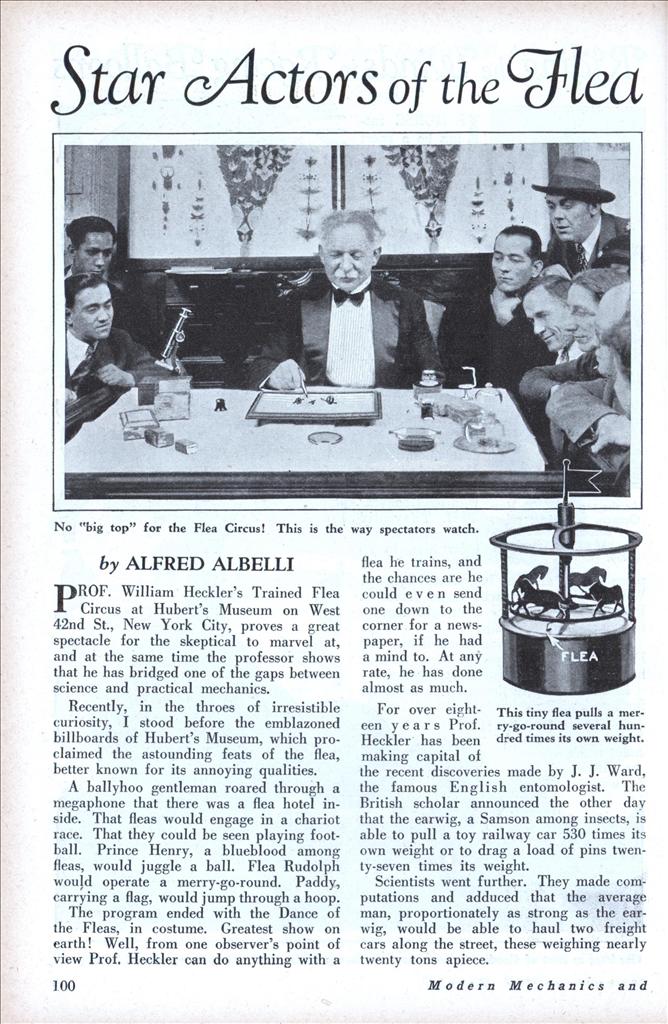 Star Actors of the Flea Circus

PROF. William Heckler’s Trained Flea Circus at Hubert’s Museum on West 42nd St., New York City, proves a great spectacle for the skeptical to marvel at, and at the same time the professor shows that he has bridged one of the gaps between science and practical mechanics.

Recently, in the throes of irresistible curiosity, I stood before the emblazoned billboards of Hubert’s Museum, which proclaimed the astounding feats of the flea, better known for its annoying qualities.

A ballyhoo gentleman roared through a megaphone that there was a flea hotel inside. That fleas would engage in a chariot race. That they could be seen playing football. Prince Henry, a blueblood among fleas, would juggle a ball. Flea Rudolph woujd operate a merry-go-round. Paddy, carrying a flag, would jump through a hoop.

The program ended with the Dance of the Fleas, in costume. Greatest show on earth! Well, from one observer’s point of view Prof, Heckler can do anything with a flea he trains, and the chances are he could even send one down to the corner for a newspaper, if he had a mind to. At any rate, he has done almost as much.

For over eighteen years Prof. Heckler has been making capital of the recent discoveries made by J. J. Ward, the famous English entomologist. The British scholar announced the other day that the earwig, a Samson among insects, is able to pull a toy railway car 530 times its own weight or to drag a load of pins twenty-seven times its weight.

Scientists went further. They made computations and adduced that the average man, proportionately as strong as the earwig, would be able to haul two freight cars along the street, these weighing nearly twenty tons apiece.

Prof. Heckler has studied all of the flea’s habits until he has been able to recruit a troupe for a circus, as it is called. This creation of his goes back to the days when he ran away from home, from his native Switzerland, to follow the adventures of the sea.

“My first meeting with the fleas,” he related to me, “was while I was traveling on the Mediterranean. Many of the boats on which I shipped were infested with these tiny demons. To the amusement of the crew, I captured some of these fleas and had them doing stunts for them. As I had much leisure time in those days, I thought up various freak performances for the fleas. In time I gave up the life of the sailor for the flea as a career and opened my first Flea Circus at the St. Louis World’s Fair. Since then my company of trained flea artists has toured the globe, playing fairs and expositions everywhere.”

He explained that of the 134 or more species, only the human flea, the so-called pulex irritans, getting its sustenance from human blood, is intellieent enough to be trained. He takes the insect at a very tender age and it is put through a rigid training for its life work.

The performing flea is found in Europe. But those which have been imported by Prof. Heckler and bred become easily acclimated. They make their home in chambers inlaid in mother-of-pearl, with white downy cot-ton as their sleeping quarters. Everything quite cozy!

Training fleas is very difficult and Prof. Heckler guards his secret conscientiously. For the first lesson the neophyte flea is put into a bottle which is almost airtight. This is quite possible as he requires little oxygen.

In this small vessel, the flea, true to his nature, gets rambunctious and hits off to a jumping spree. And every time he jumps he bumps his head. Soon he learns that by ceasing to jump he avoids the bumps, and thereby he passes his first test.

Next in his training course the flea is attached to an instrument which looks very much like a gibbet. Here he can hop or do any form of motion, but he is under restraint, of course. The shackles keep him in tow. It is in this section that the professor selects the dancers from the strong men, and classifies them. In turn they are garbed in miniature costumes, befitting their particular bit.