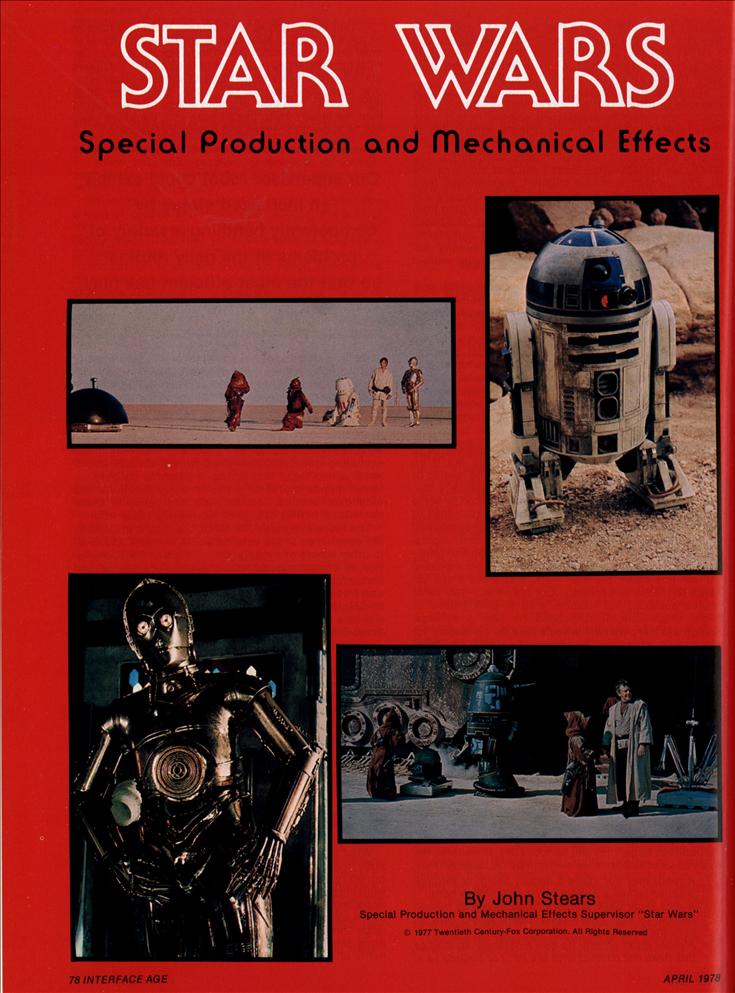 Although the robots that appeared in “Star Wars” were not true robots, they did stir a great deal of interest. Consequently, we asked the genius behind them, John Stears, to give us an idea of what went into their design.

We would like to thank the Star Wars Corporation, and Twentieth Century-Fox Corporation, for giving us permission to use this story. —Editor

DEVELOPMENT AND DESIGN OF ALL ARTOO-DETOO ROBOTS

(In conjunction with the production designer, who was responsible for their general appearance.) The problems were many, inasmuch that the director wanted to use a human as much as he could so as not to loose the character to a pure mechanical machine. This posed the question of how small a human, sufficiently coordinated and physically able, could be found. I obviously had to design my robot around the person selected, bearing in mind the limitations of what the operator inside could possibly do without undue strain, as he was to be inside for long periods in the discomfort of the desert sun and the studio lighting.

After selecting our midget (Kenny Baker), the first problem was to make him as comfortable as possible, yet make his shell as small as we could. This was accomplished by a harness over his shoulders attached to a seat. This took the weight off him until we were ready to turn the camera, the robot being supported externally until the last second. One of the big problems, as you can see, was weight, and how to keep it as low as possible.

The next major problem was how to get him to walk. The various types of surfaces he had to walk on were to range from soft sand, salt often saturated, uneven stones and shiny slippery studio sets. One added disadvantage was that often it was not to be a level surface.

This was achieved by various types of surface on his boots, which ranged from a series of non-return rollers to give a forward movement, to others which had a number of spring loaded balls on each side of the boot, which enabled him to sway from side to side. A very important factor was vision for the man inside to enable him to walk to his marks and most important to keep his balance. This was done by a one-way lens in the detachable head, which was on roller bearings to allow it to be turned 360 degrees by the operator (Kenny), although he could turn his head from side to side. The actual majority of weight which was displaced when he walked, i.e., the side to side action, was assisted by spring loaded pistons placed externally on the legs.

The external arms which had to function were counterbalanced in order to let the operator lift and perform the various tasks required. The amount of room he had to move his fingers, which were of short stumpy type associated with dwarf genetics, was possibly no more than 1″.

In order to give Artoo-Detoo a visible change in mood, I used fibre optics, which in turn illuminated a panel in the head. Using colors to give the effect of a change in mood was accomplished by using a single light source with a motorized color wheel.

Other light sources were installed for the hologram projector, all of which were powered by high-output, jelly-type non-spill batteries.

There was nothing used in the manufacture of both Artoo’s which was not machined, with the exception of the viewing lens. I was totally responsible for their creation, apart of course, from their conception, which was George Lucas’s; and their cosmetics which, as I said, Was done in conjunction with the art director.

A mechanical version was necessary because in order to move quickly a third leg had to be dropped in the center in action, which allowed it to be steerable. Infinite speed up to 7 mph was achieved through twin high torque motors mounted in the feet of the outside legs. The steering was by a two wheel mechanism in the front leg, the name of which does not exist and made no sense to anyone until it was installed and worked.

Mechanical Artoo was controlled by using a conventional radio transmitter and receiver as is used for flying models and boats. The servos in turn were hooked up to various relays and speed controllers for the operations required. The main power was supplied by a series of 6 volt jelly batteries.

Although everything checked out beautifully on the one and only test it had in the studio, we had a bad time for a few hours in the desert. A sand storm, which created very bad static, affected our transmitter range. This resulted in Artoo-Detoo and Threepio appearing to copulate in front of the unit in the middle of the desert. Up until now it appears to have been futile, but one can’t be too sure of the gestation period of robots.

Apart from this incident, and a bit of damage to the dropping leg caused in transit, all the robots functioned well.

There were four of these, which are incidental to the two principal robots, Artoo-Detoo and See-Threepio.

The Baby Box is the odd one out here because it functioned in the Death Star only. It is the little black box which careens around doing its thing, which includes a little cameo of mine in the reaction it gives when it sees the Wookie. It screeches to a halt and does an immediate about-turn and shoots off at an alarming rate in the opposite direction. There were several of these Baby Box Robots, some of which pulled many trucks behind them.

The Dome Robot as seen with the others by The Sand Crawler is really, in my view, the power source for the others to re-charge themselves by. Inside the smoked perspex dome is a rotating solar panel by means of which it collects solar energy and stores it for the other robots to plug in and recharge their own batteries.

The Stick Robot, which assists Luke at the vaporizing units, had a pneumatically operated arm. Unfortunately it is not featured in the final cut.

The Umbrella Robot has electrically powered features and a pneumatic scoop for collecting soil samples.

All of these robots were radio controlled. The main problem was the terrain they were to be operated in: hard compressed sand, loose sand, dry salt, wet salt and small rocky areas. They had to be very powerful and weighed in at around 250 pounds each. They had to be capable of handling steep grades and turn in their own length. The biggest problem I had was to make a self-cleaning tank track; one which would not push itself or the wheels through a build up of sand, etc., but would stay put no matter what. On close inspection you will see how I did this. Radio controlled model aircraft is one of my hobbies, which enabled me to operate the robots with any sort of precision. I had a few problems when my crew members had to operate them, because of more than one robot in a shot. They did very well, though.

See-Threepio, being a humanoid, I was not involved with, apart from helping out with articulation problems and his illuminated eyes. These I accomplished with one way lenses, incorporating the light source.

I was responsible entirely for his oil bath.