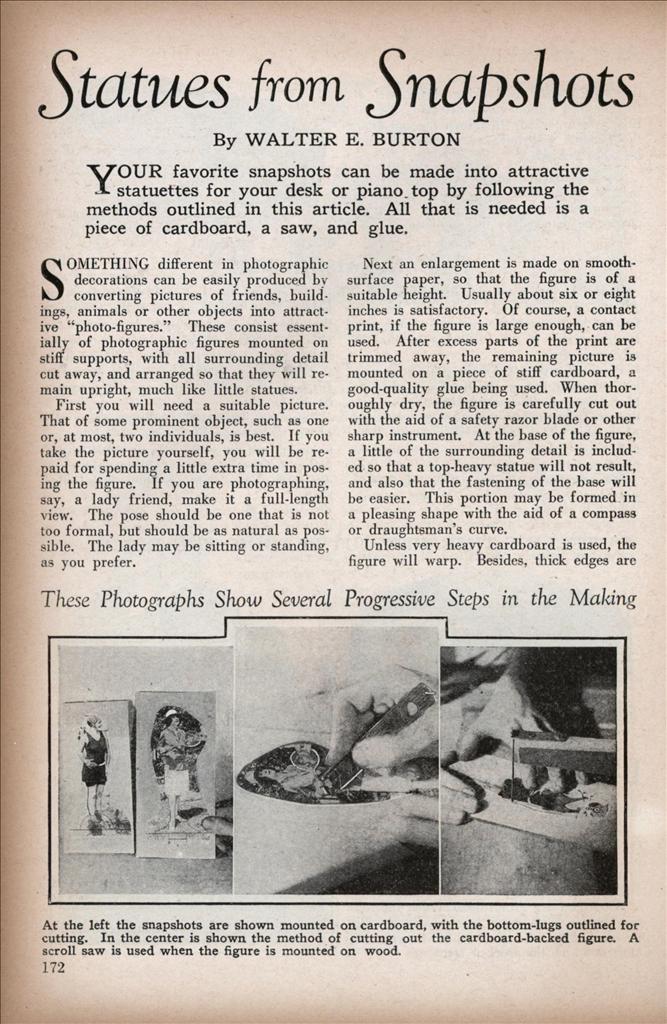 YOUR favorite snapshots can be made into attractive statuettes for your desk or piano, top by following the methods outlined in this article. All that is needed is a piece of cardboard, a saw, and glue.

SOMETHING different in photographic decorations can be easily produced by converting pictures of friends, buildings, animals or other objects into attractive “photo-figures.” These consist essentially of photographic figures mounted on stiff supports, with all surrounding detail cut away, and arranged so that they will remain upright, much like little statues.

First you will need a suitable picture. That of some prominent object, such as one or, at most, two individuals, is best. If you take the picture yourself, you will be repaid for spending a little extra time in posing the figure. If you are photographing, say, a lady friend, make it a full-length view. The pose should be one that is not too formal, but should be as natural as possible. The lady may be sitting or standing, as you prefer.

Next an enlargement is made on smooth-surface paper, so that the figure is of a suitable height. Usually about six or eight inches is satisfactory. Of course, a contact print, if the figure is large enough, can be used. After excess parts of the print are trimmed away, the remaining picture is mounted on a piece of stiff cardboard, a good-quality glue being used. When thoroughly dry, the figure is carefully cut out with the aid of a safety razor blade or other sharp instrument. At the base of the figure, a little of the surrounding detail is included so that a top-heavy statue will not result, and also that the fastening of the base will be easier. This portion may be formed in a pleasing shape with the aid of a compass or draughtsman’s curve.

Unless very heavy cardboard is used, the figure will warp. Besides, thick edges arc not desirable because they are too prominent. Therefore a re-enforcing back is cut from wood to conform roughly with the outline, but a little smaller than the figure. The thickness of this wooden back should be about one-eighth inch. The re-enforcing piece is rounded on one surface so that the edges are thin, and the other or flat side is glued to the back of the cardboard cut-out.

There are a variety of ways of making the base. One is to cut a block from a piece of hard wood, such as maple; carefully plane and sandpaper the surfaces, and paint with black drawing ink. When the ink is dry, a coat of floor wax is applied. In cutting out the figure, a small lug is left projecting below the base line, if this type of base is to be used. The lug fits into a hole cut into the base. Another method of forming a support is to form a circular disc of wood, preferably on a lathe, and then saw it into two semi-circular pieces. One of these is glued to the back of the cut-out, so that the figure seems to stand on the surface of the table or other support. If you desire to make a very elaborate job of it, you can cut and polish a base from a piece of marble. This, however, is somewhat beyond the abilities of the average amateur.

Finishing touches are given by painting the back and edges of the figure and, if desired, the base, with a quick-drying lacquer of suitable color. Care should be taken not to smear the surface of the picture. The photographic surface can be left as it is, or can be protected by a coating of photographic varnish or ordinary floor wax rubbed to a gloss.

A more simple but not quite so attractive method of making photo-figures is to paste the picture on a thin piece of plywood or cigar box wood, cut out the figure with a scroll saw, smooth the edges, mount upright on one of the bases described, and then apply lacquer or paint. Care should be taken that the surface of the wood is absolutely smooth and that the grain is not too prominent, else surface irregularities in the picture will be noticeable. The main disadvantage of this method is the relatively thick edges which result and the danger of ruining the figure by splitting, especially near the edges.

Cut-outs made according to either of the methods described are considerably more attractive than the more conventional photograph. They make ideal gifts. The appearance can be improved by coloring the picture with water or oil paints, such as those made especially for coloring photographs.