Popular Science
Issue: May, 1929
Posted in: Nautical, Origins, Trains
3 Comments on Steamer Carries a Mile of Cars (May, 1929)

This seemed to me like an early, less efficient predecessor to modern containerized shipping. The obvious disadvantages are that you have to carry the whole train cars, they don’t stack well and you can’t put them on a truck. It turns out that if you look at the origins section of the Wikipedia page for containerization, they mention this company, Seatrain Lines (which went bankrupt in 1981).

These ships could carry 95 train cars. For comparison a modern Ultra Large Container Vessel can carry 15,000 containers with a capacity similar to a train car. 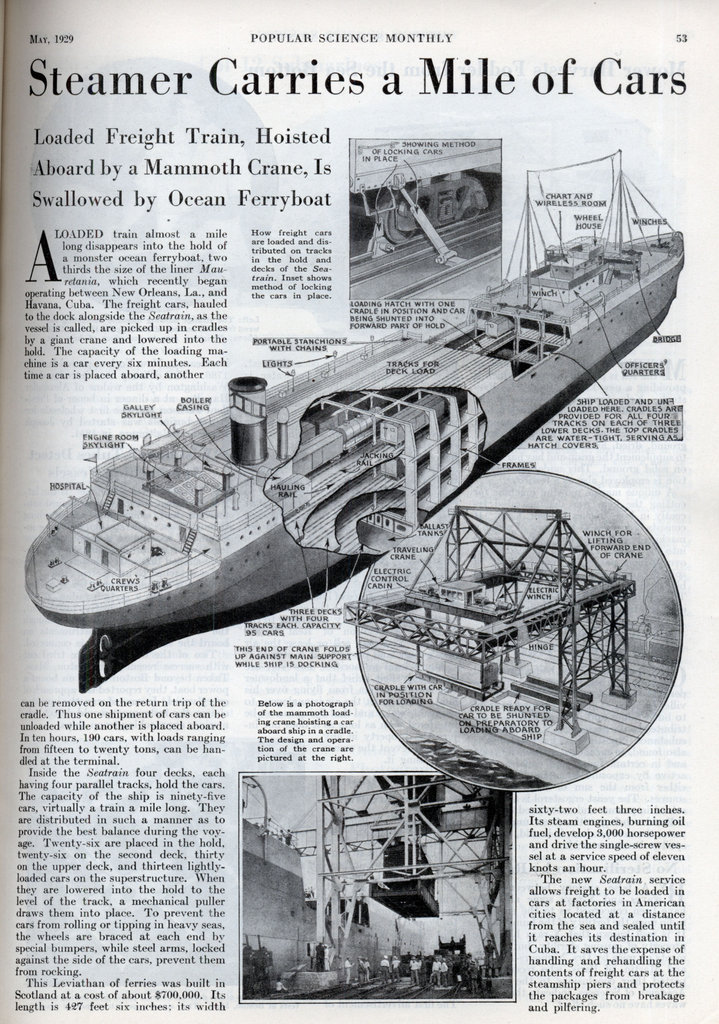 Steamer Carries a Mile of Cars

Loaded Freight Train, Hoisted Aboard by a Mammoth Crane, Is Swallowed by Ocean Ferryboat

A LOADED train almost a mile long disappears into the hold of a monster ocean ferryboat, two thirds the size of the liner Mauretania, which recently began operating between New Orleans, La., and Havana, Cuba. The freight cars, hauled to the dock alongside the Seatrain, as the vessel is called, are picked up in cradles by a giant crane and lowered into the hold. The capacity of the loading machine is a car every six minutes. Each time a car is placed aboard, another can be removed on the return trip of the cradle. Thus one shipment of cars can be unloaded while another is placed aboard. In ten hours, 190 cars, with loads ranging from fifteen to twenty tons, can be handled at the terminal.

Inside the Seatrain four decks, each having four parallel tracks, hold the cars. The capacity of the ship is ninety-five cars, virtually a train a mile long. They are distributed in such a manner as to provide the best balance during the voyage. Twenty-six are placed in the hold, twenty-six on the second deck, thirty on the upper deck, and thirteen lightly-loaded cars on the superstructure. When they are lowered into the hold to the level of the track, a mechanical puller draws them into place. To prevent the cars from rolling or tipping in heavy seas, the wheels are braced at each end by special bumpers, while steel arms, locked against the side of the cars, prevent them from rocking.

This Leviathan of ferries was built in Scotland at a cost of about $700,000. Its length is 427 feet six inches: its width sixty-two feet three inches. Its steam engines, burning oil fuel, develop 3,000 horsepower and drive the single-screw vessel at a service speed of eleven knots an hour.

The new Seatrain service allows freight to be loaded in cars at factories in American cities located at a distance from the sea and sealed until it reaches its destination in Cuba. It saves the expense of handling and rehandling the contents of freight cars at the steamship piers and protects the packages from breakage and pilfering.