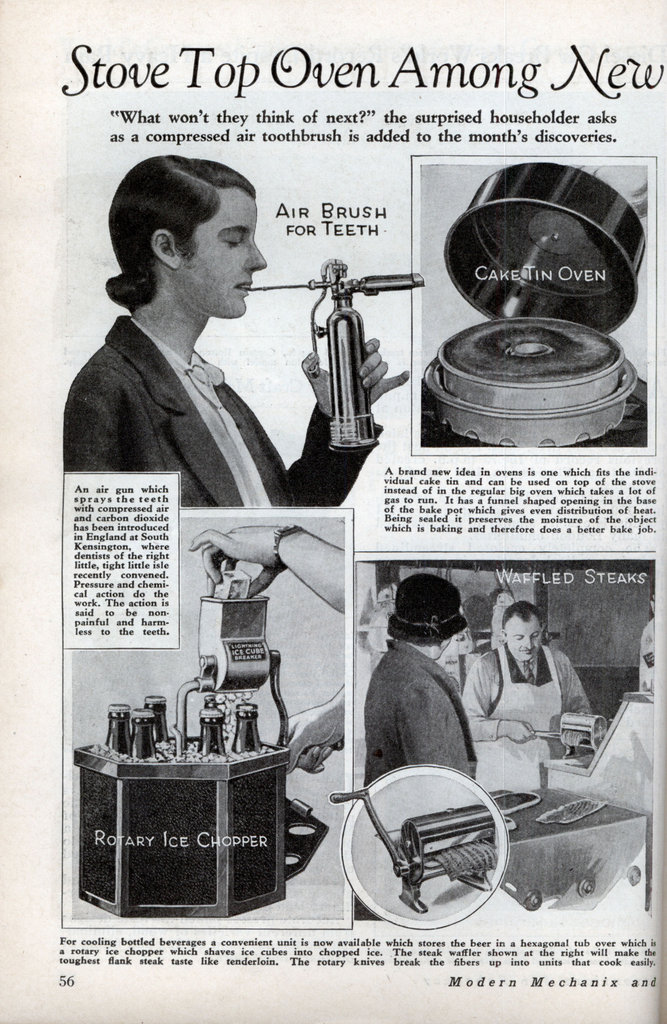 “What won’t they think of next?” the surprised householder asks as a compressed air toothbrush is added to the month’s discoveries.

An air gun which sprays the teeth with compressed air and carbon dioxide has been introduced in England at South Kensington, where dentists of the right little, tight little isle recently convened. Pressure and chemical action do the work. The action is said to be non-painful and harmless to the teeth.

For cooling bottled beverages a convenient unit is now available which stores the beer in a hexagonal tub over which is a rotary ice chopper which shaves ice cubes into chopped ice.

The steak waffler shown at the right will make the toughest flank steak taste like tenderloin. The rotary knives break the fibers up into units that cook easily.

A brand new idea in ovens is one which fits the individual cake tin and can be used on top of the stove instead of in the regular big oven which takes a lot of gas to run. It has a funnel shaped opening in the base of the bake pot which gives even distribution of heat. Being sealed it preserves the moisture of the object which is baking and therefore does a better bake job.

These all-purpose kitchen scissors have been recently introduced to serve many purposes in the kitchen. Vegetable slicer, bottle opener and cap puller are included in its many uses.

Above: Ann Lee, motion picture player, visiting the American Beauty and Styles Exhibition in the Grand Central Palace, N. Y., tries out the oxygen bubble bath. This new aid to beauty mixes 20 per cent oxygen with air. The treatment results in bleaching, beautifying.

Above is shown a siIent portable humidifier for use in rooms difficult to keep comfortable. Right, above, shows new portable home manicure set which much i. claimed for, including its ability to do the difficult task of polishing toenails.