Popular Mechanics
Issue: May, 1936
Posted in: General
2 Comments on Strange Facts about Power Age (May, 1936) 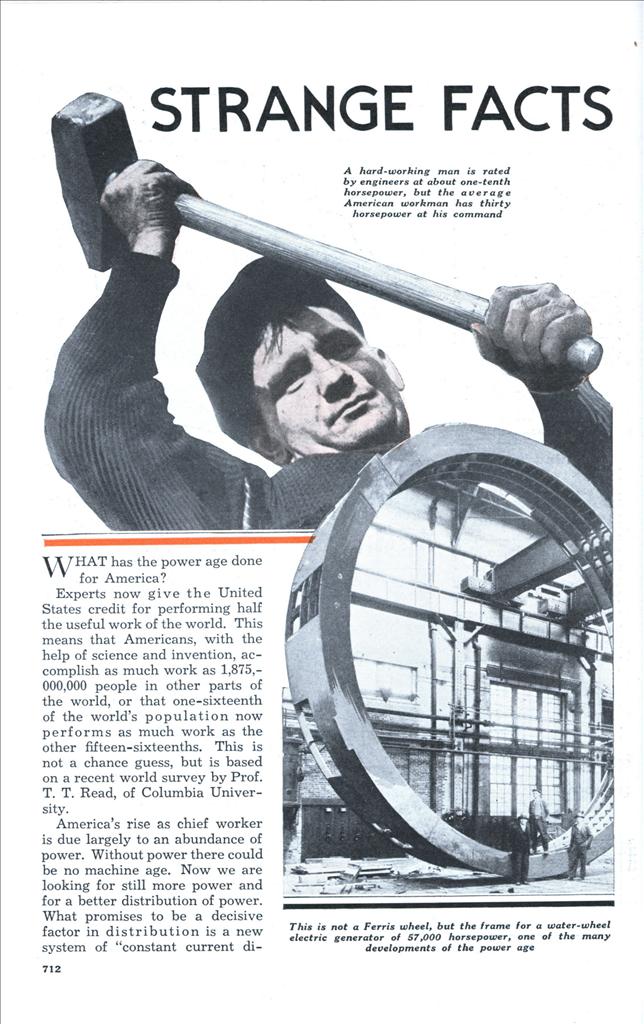 WHAT has the power age done for America? Experts now give the United States credit for performing half the useful work of the world. This means that Americans, with the help of science and invention, accomplish as much work as 1,875,-000,000 people in other parts of the world, or that one-sixteenth of the world’s population now performs as much work as the other fifteen-sixteenths. This is not a chance guess, but is based on a recent world survey by Prof. T. T. Read, of Columbia University.

America’s rise as chief worker is due largely to an abundance of power. Without power there could be no machine age. Now we are looking for still more power and for a better distribution of power. What promises to be a decisive factor in distribution is a new system of “constant current di- rect-current” transmission, developed in General Electric’s laboratories by Dr. C. H. Willis, B. D. Bedford, and Dr. F. R. Elder.

Electric engineers hail the system as revolutionary. For the layman it means simply that direct-current power may now be transmitted any distance from a power-generating plant; ultimately it may displace the present system of transmitting alternating current. In one of his last interviews, Edison made this prediction: “In a few years everything will be direct current. Then everything will be changed. We will be able to send current over distances of thousands of miles.”

The fulfillment of Edison’s dream has awaited the development of the “thyratron” and “phanatron,” members of the ever-growing tube family. These have given engineers the means of overcoming many difficulties which heretofore prevented direct-current power transmission on a commercial scale.

“Alternating current is at present almost universally used for power transmission, in spite of many difficulties,” said Dr. Willis. “Control of power flow is largely determined by the demands of the system, and the operators have little control except by means of circuit breakers, which may be opened or closed, automatically or manually, usually resulting in interruption of service. This means that in case of faults in the system, a large concentration of power results, which may be sufficient to shake the system apart and cause considerable damage.

“The new system, however, places in the hands of the operator full control. He can at all times control not only the amount of power flow but its direction.

The system cannot get out of phase or out of synchronism; and faults, such as short circuits, cause a drop in power flow rather than an increase.”

If direct-current power transmission is adopted generally, the whole country will be united into one giant power pool. The nature of the direct-current power circuit is such that systems of like or unlike frequencies can be operated together to feed any other system of like or unlike frequencies. Power lines which at present do not go beyond 250 miles, can be extended indefinitely. To transmit alternating current even for 250 miles necessitates high cost and high voltages. Modern direct-current power transmission may be compared to a Mississippi river of powerâ€”a mighty stream of direct current fed by tributaries with either alternating or direct current.

Electricity is an invisible force. Even in a power plant you see little evidence of the immense power generated. And although we can produce it and harness it, electricity is still one of the greatest riddles known to man. A cheap abundance of power gives America many advantages. Each person in the United States represents a daily consumption of about thirteen horsepower. The average for England is only 6.6 horsepower, and for India and China, it is less than one-half horsepower per person. There is still a general misconception concerning the amount of useful work performed by domestic animals. All of them do not perform more than five per cent of the useful work. When you consider how many people are employed in feeding and caring for these animals, their contribution to the world’s work is negligible.

Considering how many millions of people are still engaged in muscular labor, you would expect their contribution to the world’s work would bulk large. But human muscles do not perform more than one-eighth of the world’s work. What can one man do? The engineer rates an ordinary laborer at one-tenth horsepower. That is not much; yet in some backward countries, the percentage of man power against machine power still bulks large. But in the United States, the work done by mechanical means is forty times the work done by muscles. In a progressive country, it becomes more and more expensive to buy muscle power. It costs but a few cents a day to run a one-tenth horsepower motor and a barrel of crude oil yields an average of 183 horsepower of energy, corresponding to the work output for a day of 1,500 average men.

The power age has brought about queer situations in the distribution of the world’s work. Although one-twentieth of the world’s population lives south of the equator, it performs only one-fortieth of the total work. The average American family employs the equivalent of eleven able-bodied men fifty-six hours per week, at a total cost of about $75 per year. This is far cheaper than owning slaves. Power machinery gives the average American workman about thirty horsepower at his command. This means a 300-fold increase of a man’s muscular energy.

The power age is largely dependent upon fuel, since less than ten per cent of the world’s power comes from falling water. Coal performs about two-thirds of the world’s work today and about one-third of all the work done by water power is performed in the United States. Since 1859, about 800,000 oil wells have been drilled in the United States, and about 300,000 are still producing. If we depended upon fuels alone, the end of the power age might be in sight. Such an expert as Dr. Gustav Egloff predicted recently that if we depended solely on coal, we could run our machinery for another 6,000 years, assuming we did not increase horsepower enormously. Dr. Egloff’s presumption is that 7,000 billion tons of coal are still available. But if we extend the limit of mining operations below 3,000 feet, we shall have much more coal. As for oil resources, added Dr. Egloff, about 2,000,000 out of a possible 1,110,000,000 acres have been exploited in the United States.

Since oil first was struck in Pennsylvania, about twenty-six billion barrels of crude have been taken out of the earth. “This,” Dr. Egloff said, “would not fill a hole in the earth a mile deep and a mile wide. But even so, the petroleum resources of the United States won’t last us much longer than a century.”

After the richest concentrations of oil have been used, there is another source of crude largely untapped. Experts have recently surveyed vast deposits of coal and oil shale in Utah and Colorado. The shales cover thousands of square miles. One series averages twenty-five feet in thickness and yields about forty gallons of oil per ton; another fifty feet thick averages thirty-two gallons per ton. Government engineers estimate this oil can be extracted for about fifty to seventy-five cents per barrel.

Another possible source of common fuel is plant life. When present gasoline supplies get low, it may be possible to manufacture alcohol cheaply from the abundant vegetation in the tropic regions. According to present beliefs, alcohol will become more and more important as a fuel.