Modern Mechanix
Issue: May, 1932
Posted in: Sign of the Times
2 Comments on Strange Perils that Confront City Dwellers (May, 1932) 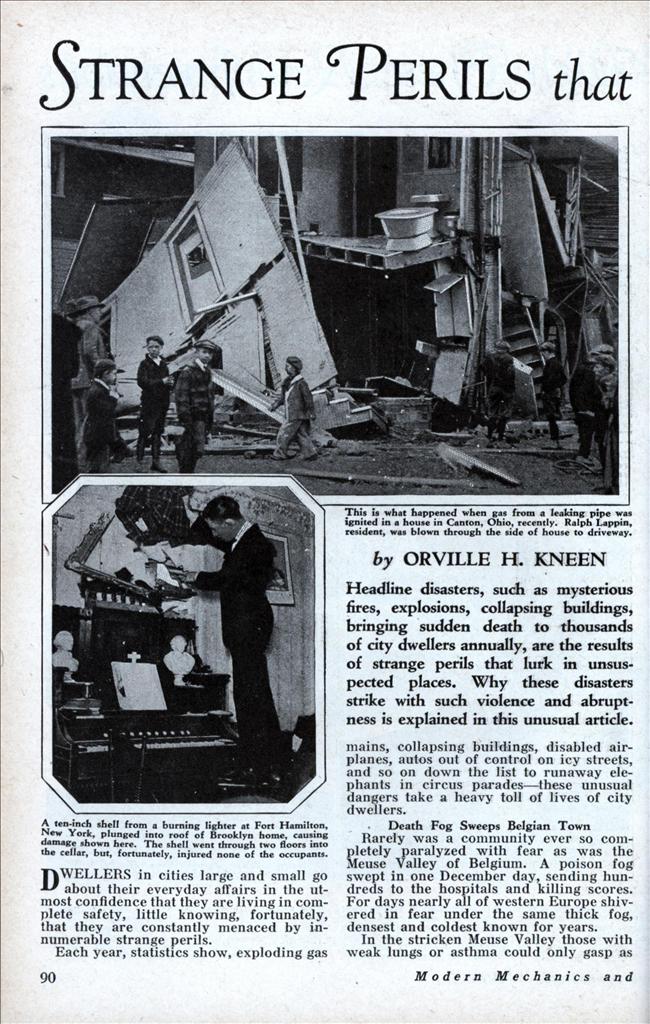 Headline disasters, such as mysterious fires, explosions, collapsing buildings, bringing sudden death to thousands of city dwellers annually, are the results of strange perils that lurk in unsuspected places. Why these disasters strike with such violence and abruptness is explained in this unusual article.

DWELLERS in cities large and small go about their everyday affairs in the utmost confidence that they are living in complete safety, little knowing, fortunately, that they are constantly menaced by innumerable strange perils.

Each year, statistics show, exploding gas mains, collapsing buildings, disabled airplanes, autos out of control on icy streets, and so on down the list to runaway elephants in circus parades—these unusual dangers take a heavy toll of lives of city dwellers.

Death Fog Sweeps Belgian Town Rarely was a community ever so completely paralyzed with fear as was the Meuse Valley of Belgium. A poison fog swept in one December day, sending hundreds to the hospitals and killing scores. For days nearly all of western Europe shivered in fear under the same thick fog, densest and coldest known for years.

In the stricken Meuse Valley those with weak lungs or asthma could only gasp as the clouds of deadly vapor rolled over the land. The pungent odor, along with the sudden death of many cattle, proved that some deadly gas was being carried by the fog.

Cause of Death Fog A few weeks ago, after a long inquiry, a report was submitted by scientists that sulphuric acid fumes from various factories, mixing with the water vapor, dust and “toxic particles,” had rendered the air poisonous.

Abnormal weather conditions had kept the air from circulating and prevented warming of the earth by the sun; frost kept the temperature down. The report stressed the “urgency of measures to protect the populace . . .”

Thus thousands of people are dependent upon the weather for life itself.

Chemical Plants Menace Towns Gas attacks are only one phase of the hidden perils that hang over modern cities. The hazards of wholesale death are ever-present when multitudes of people are living close to chemical industries, power plants, combustible buildings and explosive materials.

Death-dealing forces in scientific laboratories sometimes burst their bounds. And the worst of it is that city-dwellers rarely think of being in danger.

But the crowded city harbors, on every side, above and below, sleeping forces that, released on a moment’s notice, are far more dangerous than the worst hazards of battle. The entire wiping out of a city is not only possible, but has occurred more than once since the annihilation of Sodom and Gomorrah.

Probably the worst single catastrophe of modern times was the explosion of the Baden Aniline Dye and Chemical Works, at Oppau, Germany. Over 1,000 were killed, thousands were injured, the town was wrecked and damage was felt for more than fifty miles.

Last year almost every citizen of Oradour-Sur-Vayres, in France, suddenly lost the power of speech. Many had strange fevers that did not yield to treatment. Few houses that did not have one or more cases.

Finally the mysterious plague was traced to arsenic in the wine, just sufficient to paralyze the tongues of those who drank it. AU recovered, but the source of the poison was not found.

Our own epidemic of “jake” paralysis was far more serious. Tens of thousands of liquor drinkers in the Middle West were more or less paralyzed, but the original source of the obscure poison, found only in bootleg “Jamaica ginger,” was not discovered. Publicity, however, quickly stopped the supply. Thousands of the victims today are able to walk only with crutches.

Germs in Laboratories Form Deadly Hazard Another sort of hazard was revealed in 1926, when a Swiss bacteriologist was working with a virulent culture of tuberculosis germs. Suddenly the glass container, under pressure, burst with a loud report, showering the scientist with deadly germs. Locking the door, he tore off his clothes and for hours burned his hands as he washed every part of the laboratory with antiseptic.

In London, test tubes containing influenza germs enough to start an epidemic were stolen from a doctor. Nothing happened, but it is disquieting to think what havoc unscrupulous persons might spread with such germs and bacteria.

Planes Flying Over City Endanger Life Wholesale death from overhead was not much of a hazard until recently. Falling materials, planks, safes, and so on, usually; catch only one or two persons. But we now have wider hazards from falling aircraft. In New York last year, when a spinning plane headed toward crowded Broadway, only chance landed the craft on a roof instead of among hundreds who thronged the. streets.

Airplane Cylinder Falls Into House Recently a Negro maid in Harlem turned white when showered with plaster, as a terrific crash shook the house. A 25-pound cylinder had dropped a mile from an airplane which was later found by aerial detectives. It had lost a cylinder, a piston and part of the cowling, and made a forced landing in a small garden on Ward’s Island. Three weeks previously a pilot lost control of his machine when his motor went dead while he was looping. He lit with terrific force on the roof of a frame dwelling. The motor crashed through and landed on the dining room floor, missing two young people by inches. The pilot escaped with minor injuries. With less good fortune an entire family or even scores might have been killed or injured.

Disabled Blimp Kills 10 in Bank In 1919, a 158-foot blimp with two 80-horsepower rotary motors burst into flames and plunged down into a Chicago bank. Gasoline flames were sprayed over the interior, ten employes were killed instantly or died later, and thirty more were injured.

Air laws are being enforced and will reduce such hazards to a minimum. But with planes and dirigibles carrying scores or hundreds on each flight, catastrophes can only be avoided by keeping aircraft away from cities.

But by far the greatest city perils come from underground. Modern cities, honeycombed with water pipes and sewers, elec- trical conduits, cables, subways, manholes, tunnels and passages and cavities of all kinds, employ thousands to run the underground cities and keep them safe. Sometimes they fail.

Houses Fall Into Excavations Few cities are built on solid rock, as is the Manhattan part of New York. Some towns have had mining shafts and stopes driven directly under them. Springs, creeks and even small rivers, covered over by fills or buildings, have excavated large areas into which houses, apartments, factories, hotels, have suddenly or slowly sunk. Cities built on steep hills have had scores killed by sudden slides.

Considering the enormous amount of electrical cable and wiring underground, the number of short-circuits and fires is surprisingly low. In 1928 a burning cable filled a New York subway with choking fumes, stalled a long train with about 3,000 passengers, and overcame hundreds before they could rush out to the nearest exit. A burst water main shortly afterward flooded subway tracks, and 89 were injured in the panic.

Spouting geysers fifty feet high, from high-pressure mains, have drenched pedestrians, flooded streets, and caused heavy damage. Boilers have exploded, releasing superheated steam in great clouds, and causing fires. Perils such as these are infrequent, however, and at worst affect only a small part of a city and a few people.

But a far more horrible, insidious and inescapable peril is that of poisonous gases. A vast number of chemicals are used today, and most of the plants are in cities, often in congested parts. Products that are safe enough in industry become terrible menaces to whole cities when released, as when a fire or explosion suddenly converts them into gas.

On May 20, 1928, two girls fishing from a rowboat near Hamburg, Germany, suddenly collapsed. Several hours later people and cattle on Wilhelmsburg Island, in the Elbe River, began dropping in their tracks. The wind shifted. Scores of men, women and children at a pleasure resort were suddenly stricken. Some died in agony. At a wedding feast the guests became unconscious.

Chickens, ducks, cats and dogs and pigs gasped and died. Soon it became known that a poison gas was loose. Hundreds rushed in terror from their homes. • Eventually a hissing tank was found, one of many containing deadly phosgene gas, the first kind used for gas attacks in the war. Expansion from warm weather and a corroded top, had caused the gas to escape. Eleven persons died, and many of the 250 sent to hospitals were ill for weeks, some for months.

Numerous cities have had experiences with “peace-time gas attacks.” In June, 1929, hydrogen sulphide gas suddenly swept over a part of El Paso, Texas, killing two sleeping children and sending a number of people to the hospital. It probably came from oil refineries nearby.

On the lower east side a chemist’s kettle exploded and routed out scores, killing one and injuring a great number.

The Cleveland clinic horror of May 16, 1929, in which 122 hospital patients and rescuers died, was caused by deadly gases from burning X-ray films. An electric light too close to the films probably ignited them. A ventilating system sent the fumes to every room. Health officers reported that the gas released was sufficient to have killed four million people. With a high wind, fog, or other conditions, this might easily have been the greatest disaster of its kind in history. Various cities have had film fires, gas “attacks,” and loss of life.

In London, two years ago, over a mile of roadway in the heart of the city was wrecked when gas mains exploded, one after another. Buses and vehicles were upturned, buildings damaged, houses shaken, manhole covers flung far and wide, while clouds of gas and sheets of flame added their terrors to the lurid scene. Water, gas, electric, telephone and other services were wrecked in an area of nearly one square mile.

Explosions in sewers, from sewer gas, gasoline fumes, etc., have been frequent. Terrific blasts in Ottawa sewers, from an unknown cause, blew off manhole covers, sent sheets of flame into basements, and rumbled under the streets for hours, injuring many. In Chicago a similar explosion killed twelve and wrecked a building in a thickly populated area.

In the home there is danger from carbon monoxide, odorless and invisible gas from motorcar exhaust, which may be eliminated by a new carburetor recently invented.

Household refrigerators mostly use harmless gases, and should be in ventilated rooms. Operators of central refrigerating systems in large buildings should use great care.