Tune in next week, when we’ll continue our oncological explorations on the Cancer Time Theater hour. 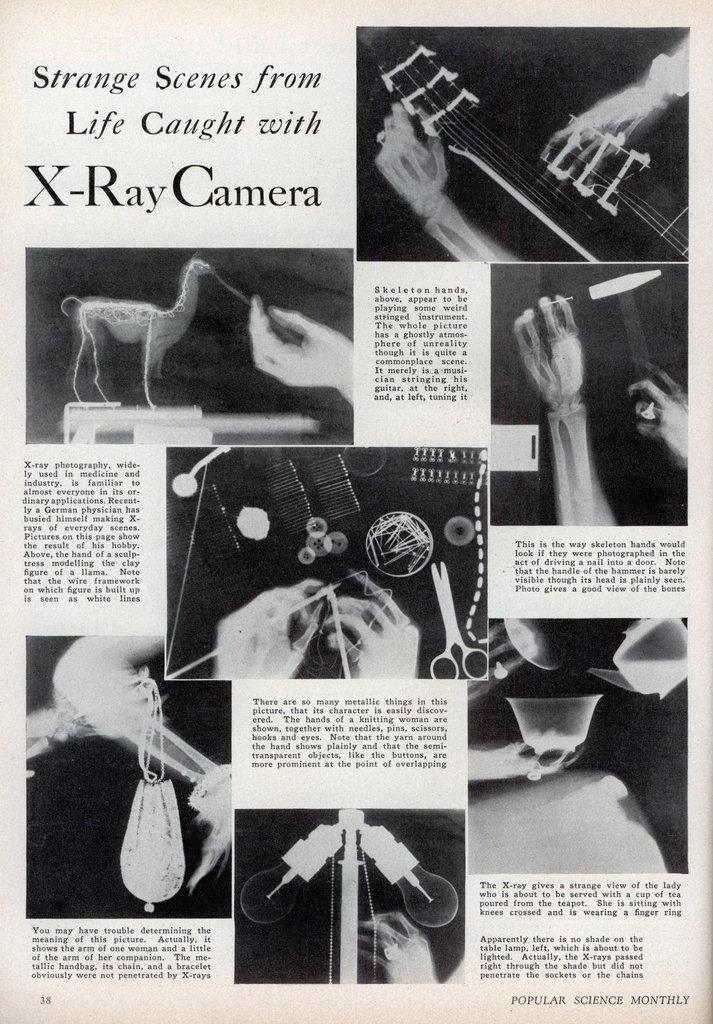 X-ray photography, widely used in medicine and industry, is familiar to almost everyone in its ordinary applications. Recently a German physician has busied himself making X-rays of everyday scenes. Pictures on this page show the result of his hobby. Above, the hand of a sculptress modelling the clay figure of a llama. Note that the wire framework on which figure is built up is seen as white lines

Skeleton hands, above, appear to be playing some weird stringed instrument. The whole picture has a ghostly atmosphere of unreality though it is quite a commonplace scene. It merely is a musician stringing his guitar, at the right, and, at left, tuning it

You may have trouble determining the meaning of this picture. Actually, it shows the arm of one woman and a little of the arm of her companion. The metallic handbag, its chain, and a bracelet obviously were not penetrated by X-rays

There are so many metallic things in this picture, that its character is easily discovered. The hands of a knitting woman are shown, together with needles, pins, scissors, hooks and eyes. Note that the yarn around the hand shows plainly and that the semi-transparent objects, like the buttons, are more prominent at the point of overlapping

This is the way skeleton hands would look if they were photographed in the act of driving a nail into a door. Note that the handle of the hammer is barely visible though its head is plainly seen. Photo gives a good view of the bones

The X-ray gives a strange view of the lady who is about to be served with a cup of tea poured from the teapot. She is sitting with knees crossed and is wearing a finger ring

Apparently there is no shade on the table lamp, left, which is about to be lighted. Actually, the X-rays passed right through the shade but did not penetrate the sockets or the chains