These stories are always the same: bold white explorers set out on a quest with local guides. At some point the locals will prove how cowardly and superstitious they are and the white men will have to either beat or bribe them back into shape. And oh yea, they’re not civilized like we are. They actually execute people. 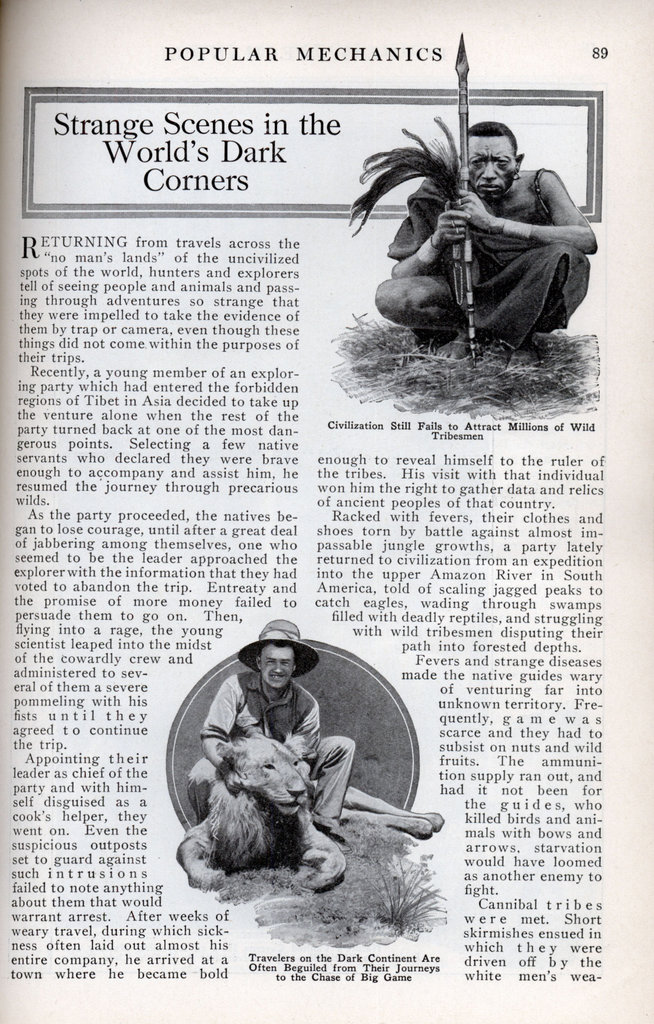 RETURNING from travels across the “no man’s lands” of the uncivilized spots of the world, hunters and explorers tell of seeing people and animals and passing through adventures so strange that they were impelled to take the evidence of them by trap or camera, even though these things did not come within the purposes of their trips.

Recently, a young member of an exploring party which had entered the forbidden regions of Tibet in Asia decided to take up the venture alone when the rest of the party turned back at one of the most dangerous points. Selecting a few native servants who declared they were brave enough to accompany and assist him, he resumed the journey through precarious wilds.

As the party proceeded, the natives began to lose courage, until after a great deal of jabbering among themselves, one who seemed to be the leader approached the explorerwith the information that they had voted to abandon the trip. Entreaty and the promise of more money failed to persuade them to go on. Then, flying into a rage, the young scientist leaped into the midst of the Cowardly crew and administered to several of them a severe pommeling with his fists until they agreed to continue the trip.

Appointing their leader as chief of the party and with himself disguised as a cook’s helper, they went on. Even the suspicious outposts set to guard against such intrusions failed to note anything about them that would warrant arrest. After weeks of weary travel, during which sickness often laid out almost his entire company, he arrived at a town where he became bold enough to reveal himself to the ruler of the tribes. His visit with that individual won him the right to gather data and relics of ancient peoples of that country.

Racked with fevers, their clothes and shoes torn by battle against almost impassable jungle growths, a party lately returned to civilization from an expedition into the upper Amazon River in South America, told of scaling jagged peaks to catch eagles, wading through swamps filled with deadly reptiles, and struggling with wild tribesmen disputing their path into forested depths.

Fevers and strange diseases made the native guides wary of venturing far into unknown territory. Frequently, game was scarce and they had to subsist on nuts and wild fruits. The ammunition supply ran out, and had it not been for the guides, who killed birds and animals with bows and arrows, starvation would have loomed as another enemy to fight.

Cannibal tribes were met. Short skirmishes ensued in which they were driven off by the white men’s weapons whose noise struck them with terror. Other dangers lurked in the marshes and underhrush, in which were found boa constrictors, man-killing beasts, and poisonous insects that attacked their victims in clouds, their bites often causing illness.

In the waters were vicious fish but a foot long, so strong that in taking one alive, a member of the party suffered the loss of a finger bitten almost off by its powerful jaws. One of the first animals to be captured in the forest was a “coati mundi,” a bright-red little fellow of the raccoon family. So fierce was it, that two dogs were torn to shreds before it finally was entangled and caged by the guides.

Cannibal peoples have also been discovered, recently, in Australia by game hunters, who have come onto several tribes which have revived their gruesome practice during the past few years. Tribal fires have been rekindled and the denizen of the “bush” refuses the advances which civilization makes him.

In Africa, several of the countries are inhabited by swarthy peoples who have set up local governments that in many cases seem to pattern after those of the white man. While in the quest of big game in the Kongo, a band of white hunters stopped overnight near a native village, where criminals were tried and sentenced by a council of petty chiefs that listened to charges and evidence similar to the courts of more progressive countries.