Science And Mechanics
Issue: Nov, 1961
Posted in: Movies
No Comments on Strato-Cinema for Jet Passengers (Nov, 1961) 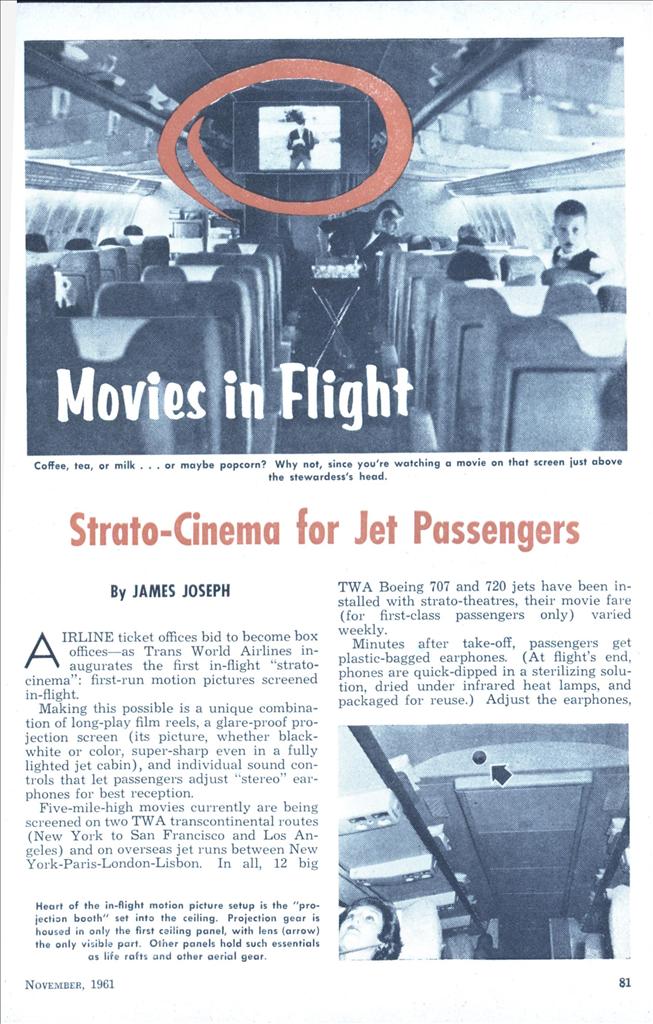 Making this possible is a unique combination of long-play film reels, a glare-proof projection screen (its picture, whether black-white or color, super-sharp even in a fully lighted jet cabin), and individual sound controls that let passengers adjust “stereo” earphones for best reception.

Five-mile-high movies currently are being screened on two TWA transcontinental routes (New York to San Francisco and Los Angeles) and on overseas jet runs between New York-Paris-London-Lisbon. In all, 12 big TWA Boeing 707 and 720 jets have been installed with strato-theatres, their movie fare (for first-class passengers only) varied weekly.

Minutes after take-off, passengers get plastic-bagged earphones. (At flight’s end, phones are quick-dipped in a sterilizing solution, dried under infrared heat lamps, and packaged for reuse.) Adjust the earphones, plug one end into an under-seat receptacle, turn up the sound-track’s volume (via a control panel knob located near the plug-in jack) —and sit back to watch upwards of two hours of uninterrupted theater fare.

Although developers are close-mouthed about specifics, system essentials include: • A 2 x 4-ft. aluminized plastic screen, whose hill-valley serrated surface is etched with TV-like “resolution lines”—creating a no-glare, totally non-reflective screen.

• A horizontally-mounted ceiling projector fed 16-mm sound film from one of two stacked, long-play, 2-ft.-diameter reels. Top reel— which holds 5000-ft. of film, enough for 2-1/4 hours of movies—winds onto a bottom reel. At flight’s end, film projectionists rewind, reset, and focus the film for its next showing.

• A ceiling-installed audio system which achieves a kind of stereophonic effect by “delayed feed” to one of the two ear-pieces worn by passengers. Created is a one millisecond delay between sound-track delivery to the ear-pieces—thus a sense of stereophony.

• Individual seat volume controls that compensate for the jet’s 80- to 90-decibel ambient noise level. Foam-rubber ear-pieces screen out much of the cabin noise.

Perhaps the system’s most critical single segment is the screen—which, in design and effect, is unidirectionally sensitive to light. Tilted forward 8°, the screen’s sawtooth surface is almost totally insensitive to light falling upon it from any but the projector’s direction. Thus, it doesn’t reflect the glare of cabin lights or even sunlight.

The screen’s minute “resolution lines” (etched about 0.001 of an inch into its sur- face) act to intensify the projected image. In effect, the serrated surface contains some 1000 microscopic “lenses” per square inch, each sensitive only to the projector’s beam. Bothersome ambient light is “absorbed” in the serrated “valleys,” reflected from the “hills.”

Moreover, the screen is designed to receive, without image distortion, the projector’s beam which strikes its surface at an angle. Reason: Since the horizontally-stacked long-play film reels take up most of the space in the ceiling-installed “projection booth” (a box 3x3x1-ft.), the projector’s lens is located about a foot off the aisle’s (and screen’s) center, the beam traveling about 23 ft. angularly before reaching the screen.

The beam’s path is so high, in fact, that there’s headroom aplenty . . . thus no interference from passengers walking the aisle.

Variable lenses permit the showing of standard or cinemascope movies. “Big screen” films use the screen’s entire 4-ft. width. Standard films use only about three-fourths of it.

Pre-flight focusing (once set, the lens is locked in position) is achieved by adding to the standard reel about 3 minutes of “focus stock”—film of the same density as the featured movie. This footage is used by projectionists to pre-set the lens’ focus, adjust for the film’s aspect ratio, and check sound levels. Once pre-set on the ground, the “projection booth” is locked—and is operationally ready when the flight engineer flips his control.

Strato-cinema developers met—and solved —the weight problem. The projector weighs but 60 lbs. and a fully-loaded reel about 15. The entire system—audio, seat plug-ins and controls, screen, and earphones—likely adds no more than 300 or 350 lbs. to the jet’s weight. It operates on the plane’s standard 400 volts, automatically shuts itself off should the film break, the projector’s cooling system fail, or other malfunctions occur.