Rocket pioneer Robert Goddard was killed today in an large explosion. Apparently the explosion occurred when a prototype Mark I Strato-Rocket was dropped on the floor. His last words reportedly were “I got it, got it, whoops!” 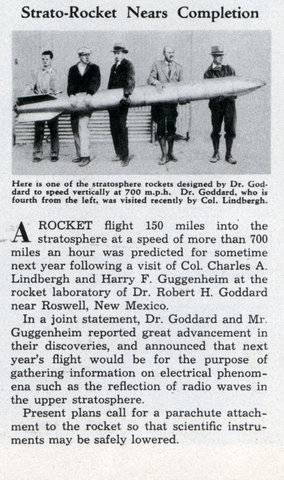 A ROCKET flight 150 miles into the stratosphere at a speed of more than 700 miles an hour was predicted for sometime next year following a visit of Col. Charles A. Lindbergh and Harry F. Guggenheim at the rocket laboratory of Dr. Robert H. Goddard near Roswell, New Mexico.

In a joint statement, Dr. Goddard and Mr. Guggenheim reported great advancement in their discoveries, and announced that next year’s flight would be for the purpose of gathering information on electrical phenomena such as the reflection of radio waves in the upper stratosphere.

Present plans call for a parachute attachment to the rocket so that scientific instruments may be safely lowered.