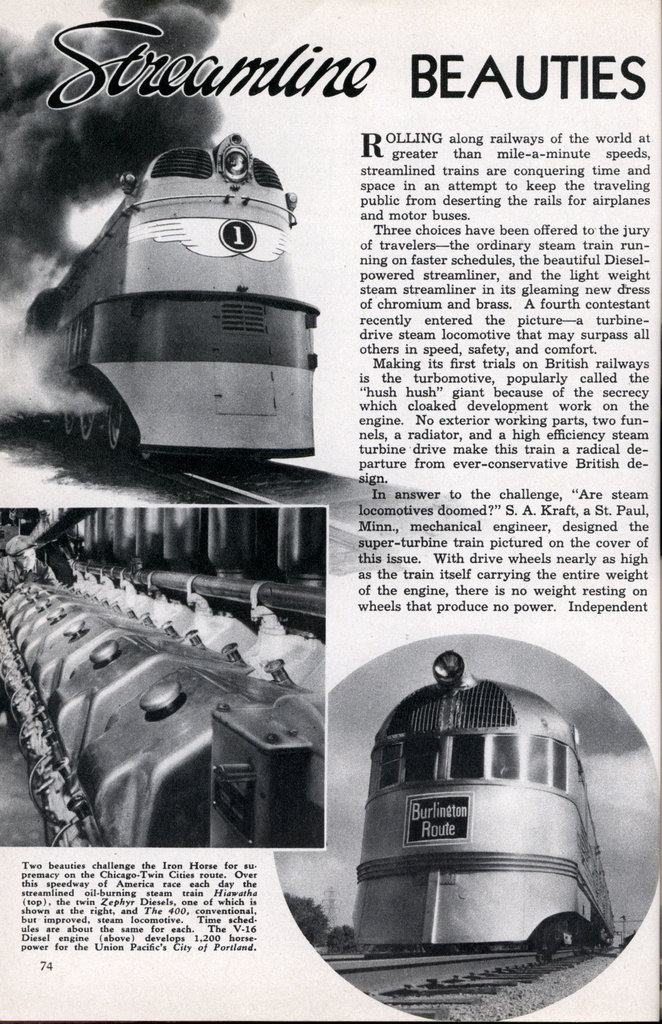 ROLLING along railways of the world at greater than mile-a-minute speeds, streamlined trains are conquering time and space in an attempt to keep the traveling public from deserting the rails for airplanes and motor buses.

Three choices have been offered to the jury of travelersâ€”the ordinary steam train running on faster schedules, the beautiful Diesel-powered streamliner, and the light weight steam streamliner in its gleaming new dress of chromium and brass. A fourth contestant recently entered the pictureâ€”a turbine-drive steam locomotive that may surpass all others in speed, safety, and comfort.

Making its first trials on British railways is the turbomotive, popularly called the “hush hush” giant because of the secrecy which cloaked development work on the engine. No exterior working parts, two funnels, a radiator, and a high efficiency steam turbine drive make this train a radical departure from ever-conservative British design.

In answer to the challenge, “Are steam locomotives doomed?” S. A. Kraft, a St. Paul, Minn., mechanical engineer, designed the super-turbine train pictured on the cover of this issue. With drive wheels nearly as high as the train itself carrying the entire weight of the engine, there is no weight resting on wheels that produce no power. Independent drive for each wheel eliminates any drag in rounding curves.

Geared to each of the wheels is a steam turbine having a perfectly smooth disc. Super-steam directed against this disc at terrific pressure exerts as much force as it would against vanes.

The roadbed itself is the only limit to the speed of this million-pound rail giant. Control is completely automatic, the engineer having only to set the single throttle to the desired speed. By a system of compressed air lines, valves are opened to admit steam to each turbine until the train reaches running speed, and brakes are applied automatically whenever this speed is exceeded on down grades. Should any wheel slip while maximum tractive effort is being applied in starting, steam will be cut off from that turbine momentarily to give the wheel a chance to grip the rails again.

No air brake lever would be needed, for the robot control system applies brakes just as soon as the train is travelling two miles faster than the speed at which the throttle is set.

Best known of the new steam trains is The 400, for a time the fastest scheduled train in the country. Increased boiler pressure, larger drive wheels, use of oil fuel to eliminate coaling stops, and heavily-ballasted roadbeds made the greater speed possible.

In a merry-go-round of speed, Burlington’s twin Zephyrs, popular Diesel-powered trains, are each making a round trip a day on the speedway of America, the route between the Twin Cities and Chicago.

But a scant year ago the first Union Pacific streamliner started the back-to-the-rails campaign. Rebuilt into a 7-car unit with a new 1,200 h.p. Winton Diesel power plant, this original M-10001 has been rechristened City of Portland. Running on a 40-hour schedule between Chicago and Portland, it brings Chicagoans 12 hours closer to the West coast by rail.

North, East, South, or Westâ€”Diesel streamliners are whizzing over the rails.

Streamlined steam power is the answer of several roads to Diesel competition. The Milwaukee Road’s Hiawatha, designed for two-mile a minute speed, races the Zephyrs and The 400 daily on the Chicago-Twin Cities route. Other lightweight steam trains are the Twentieth Century and Broadway Limited in the United States, the Flying Hamburger and Flying Frankfurter in Germany, the Asia, in Southern Manchuria, and scores of other challengers in nearly every nation of the world.