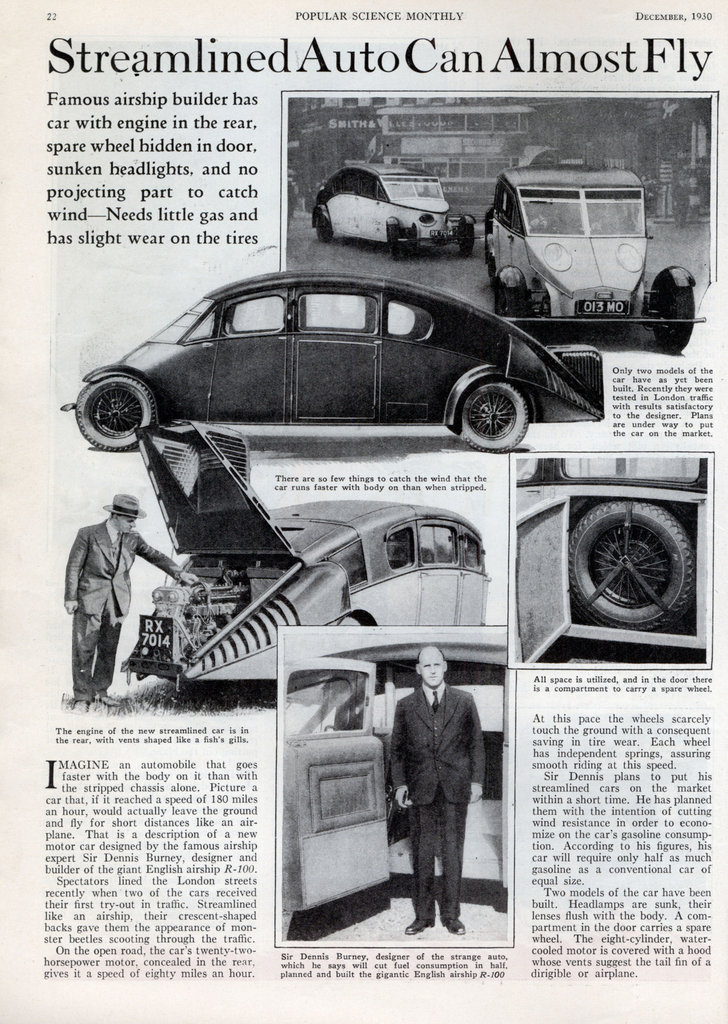 Famous airship builder has car with engine in the rear, spare wheel hidden in door, sunken headlights, and no projecting part to catch windâ€”Needs little gas and has slight wear on the tires

IMAGINE an automobile that goes faster with the body on it than with the stripped chassis alone. Picture a car that, if it reached a speed of 180 miles an hour, would actually leave the ground and fly for short distances like an airplane. That is a description of a new motor car designed by the famous airship expert Sir Dennis Burney, designer and builder of the giant English airship R-100.

Spectators lined the London streets recently when two of the cars received their first try-out in traffic. Streamlined like an airship, their crescent-shaped backs gave them the appearance of monster beetles scooting through the traffic.

On the open road, the car’s twenty-two-horsepower motor, concealed in the rear, gives it a speed of eighty miles an hour. At this pace the wheels scarcely touch the ground with a consequent saving in tire wear. Each wheel has independent springs, assuring smooth riding at this speed.

Sir Dennis plans to put his streamlined cars on the market within a short time. He has planned them with the intention of cutting wind resistance in order to economize on the car’s gasoline consumption. According to his figures, his car will require only half as much gasoline as a conventional car of equal size.

Two models of the car have been built. Headlamps are sunk, their lenses flush with the body. A compartment in the door carries a spare wheel. The eight-cylinder, water-cooled motor is covered with a hood whose vents suggest the tail fin of a dirigible or airplane.