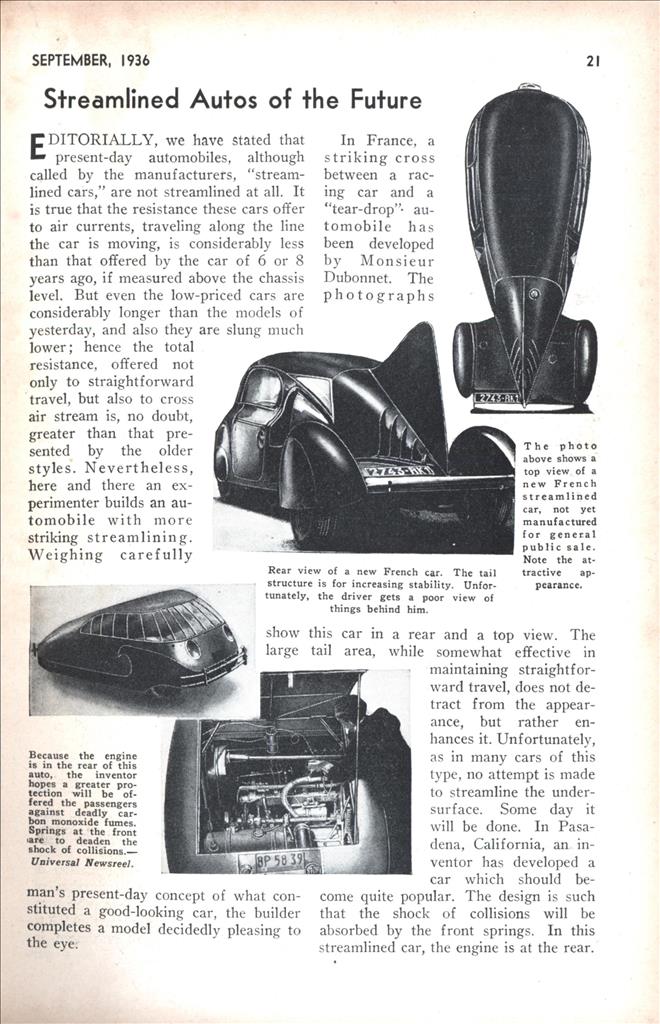 Streamlined Autos of the Future

Editorially, we have stated that present-day automobiles, although called by the manufacturers, “streamlined cars,” are not streamlined at all. It is true that the resistance these cars offer to air currents, traveling along the line the car is moving, is considerably less than that offered by the car of 6 or 8 years ago, if measured above the chassis level. But even the low-priced cars are considerably longer than the models of yesterday, and also they are slung much lower; hence the total resistance, offered not only to straightforward travel, but also to cross air stream is, no doubt, greater than that presented by the older styles. Nevertheless, here and there an experimenter builds an automobile with more striking streamlining. Weighing carefully man’s present-day concept of what constituted a good-looking car, the builder completes a model decidedly pleasing to the eye.

In France, a striking cross between a racing car and a “tear-drop”- automobile has been developed by Monsieur Dubonnet. The photographs show this car in a rear and a top view. The large tail area, while somewhat effective in maintaining straightforward travel, does not detract from the appearance, but rather enhances it. Unfortunately, as in many cars of this type, no attempt is made to streamline the under-surface. Some day it will be done. In Pasadena, California, an inventor has developed a car which should become quite popular. The design is such that the shock of collisions will be absorbed by the front springs. In this streamlined car, the engine is at the rear.