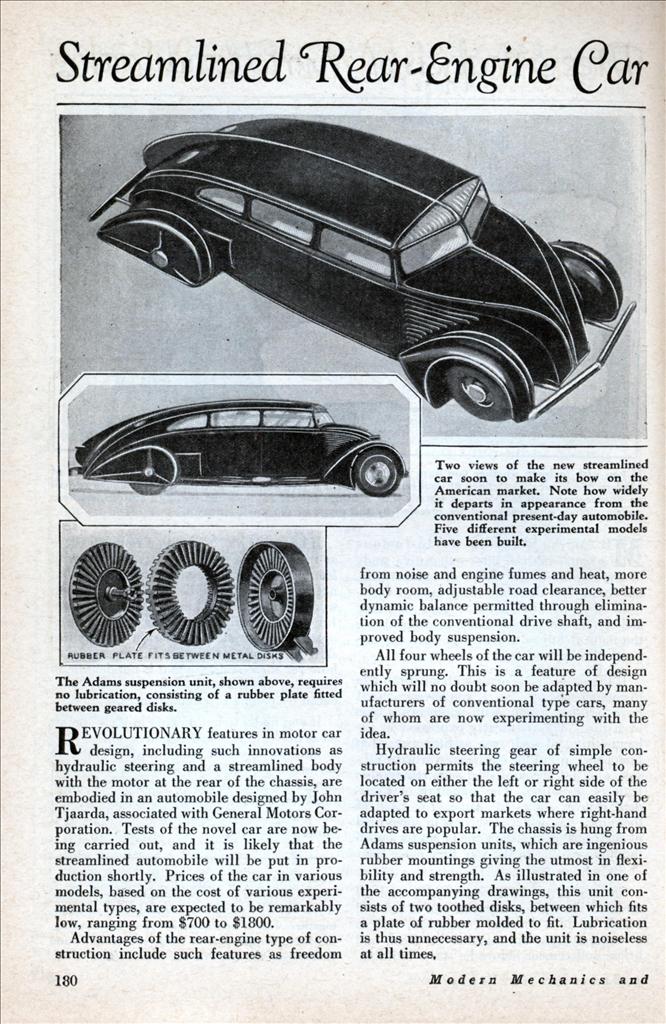 REVOLUTIONARY features in motor car design, including such innovations as hydraulic steering and a streamlined body with the motor at the rear of the chassis, are embodied in an automobile designed by John Tjaarda, associated with General Motors Corporation. Tests of the novel car are now being carried out, and it is likely that the streamlined automobile will be put in production shortly. Prices of the car in various models, based on the cost of various experimental types, are expected to be remarkably low, ranging from $700 to $1800.

Advantages of the rear-engine type of construction include such features as freedom from noise and engine fumes and heat, more body room, adjustable road clearance, better dynamic balance permitted through elimination of the conventional drive shaft, and improved body suspension.

All four wheels of the car will be independently sprung. This is a feature of design which will no doubt soon be adapted by manufacturers of conventional type cars, many of whom are now experimenting with the idea.

Hydraulic steering gear of simple construction permits the steering wheel to be located on either the left or right side of the driver’s seat so that the car can easily be adapted to export markets where right-hand drives are popular. The chassis is hung from Adams suspension units, which are ingenious rubber mountings giving the utmost in flexibility and strength. As illustrated in one of the accompanying drawings, this unit consists of two toothed disks, between which fits a plate of rubber molded to fit. Lubrication is thus unnecessary, and the unit is noiseless at all times.

It is interesting to note that the streamlined car follows along the line of development predicted in the February issue of Modern Mechanics and Inventions. There is nothing strictly original in the idea of a streamlined car, nor in the mounting of a motor at the rear, both of these features having been incorporated in a British automobile designed by Commander Burney of the dirigible R-100 some months ago. But the adaptation of the idea to the American mass market, involving the production of thousands of cars, is a new development. It is not improbable that the flivver of ten years from now will resemble the photographs reproduced on these pages.

Until the perfection of air-cleaning devices, the mounting of the motor at the rear of a car suffered from the inevitable disadvantage of being forced to breathe dust-choked air through its carburetor, causing the motor to wear out too quickly. Some of the first automobiles, twenty years ago, had their motors mounted at the rear, and many of us can remember the days of the “side winder” which was cranked on the side, of the car.

Although designer Tjaarda is associated with General Motors, the promotion of the streamlined car is being carried on by a small group of automotive engineers and manufacturers who will probably place the car on the market as an individual corporation.

Commenting on the new car Mr. Tjaarda says: “Interest prevails at present for rear-engine cars, and for good reasons. The present-day car has almost attained its height of perfection. If streamlining is going to take seriously in the near future as is predicted the arrangement of our cars today affords so many difficulties that it is not worth while to consider such a step. For many years to come there will remain an active market for the type of cars to which we are now accustomed with progress having its way. However, there is no doubt that the rear-engine car is the car of the near future.”