The only paragraph where he mentions the actual people of Africa:

“Racial tension is another vital consideration. Kenya, for instance, has its terrible Mau Maus, now on the wane but still something to reckon with. In the Union of South Africa, there is immense, unorganized resentment growing among the non-whites against the white man’s absolute, rigid supremacy. And a good place to stay away from is the shooting-war area of Algeria where the tide of hate runs high. But the timid and overly delicate have never thrived in the world’s frontiers. ” 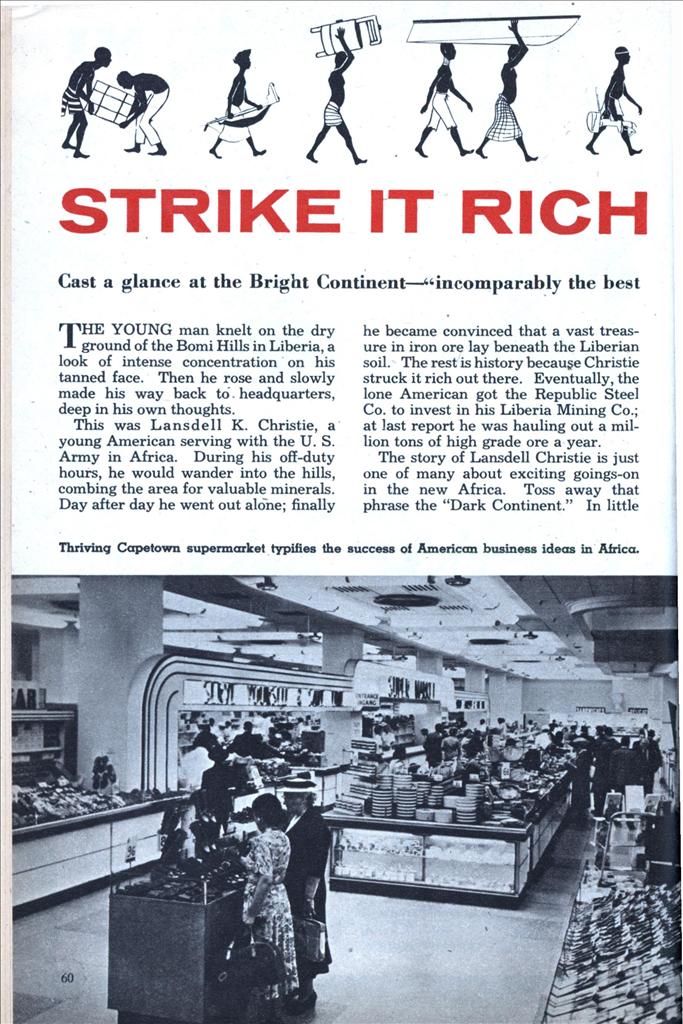 STRIKE IT RICH IN AFRICA

Cast a glance at the Bright Continent—”incomparably the best source of potential wealth waiting development in the world.”

THE YOUNG man knelt on the dry ground of the Bomi Hills in Liberia, a look of intense concentration on his tanned face. Then he rose and slowly made his way back to headquarters, deep in his own thoughts.

This was Lansdell K. Christie, a young American serving with the U.S. Army in Africa. During his off-duty hours, he would wander into the hills, combing the area for valuable minerals. Day after day he went out alone; finally he became convinced that a vast treasure in iron ore lay beneath the Liberian soil. The rest is history because Christie struck it rich out there. Eventually, the lone American got the Republic Steel Co. to invest in his Liberia Mining Co.; at last report he was hauling out a million tons of high grade ore a year.

The story of Lansdell Christie is just one of many about exciting goings-on in the new Africa. Toss away that phrase the “Dark Continent.” In little more than a generation, the light of Western progress has shone into the Stone Age wilderness of many areas and now Africa, the untamed, is bustling with modern development. The sons of cannibals now mine the raw materials of the Atomic Age. And buy appliances from Sears-Roebuck!

There are untapped riches in Africa the likes of which man has not yet seen. Africa has uranium, gold and silver. It has enormous deposits of coal, iron, manganese, chrome, copper, nickel, lead and antimony.

There are potential cotton empires to be carved out of the vast plains. There are coffee, tea and cocoa plantations which will go to the venturesome. There is a fantastic amount of virtually every * kind of valuable timber.

Listen to what people who know have to say about the new Africa: Item: John Gunther, the world-famous reporter, traveled 40,000 miles and visited 105 different localities to gather material for his monumental new work, Inside Africa. His conclusion: The continent “is incomparably the greatest potential source of wealth awaiting development in the world.”

Who, besides the adventurous Mr. Christie, is pioneering down there? And who is cashing in on the little, and not-so-little, side businesses—providing con- sumer goods and services—which blossom when the economy of a nation starts burgeoning? .

Start with the tale of John T. Williamson, a tall, taciturn Canadian who had found his way to Tanganyika on the eastern coast in a search for diamonds.

Williamson searched the Tanganyika territory for four years. Finally, on a March day, his ancient automobile became mired in the muck. Williamson sighed, hunted up a team of horses, hitched them to the car and snapped the reins. The car was yanked out but the prospector’s eyes stayed riveted on the deep slits the tires had made in the mud.

There were two large stones, the color of soapy glass. Williamson bent and reverently took them in his hands. It had begun to rain and water sluiced down his hat and into his boots but he didn’t care. Williamson remained kneeling, the diamonds in his hands.

The adventurous Canadian had made his strike. It became the richest diamond mine in Tanganyika and it now sells more than $10,000,000 worth of gems each year.

Williamson, let’s face it, was a rugged, wide-open-spaces kind of pioneer, as was Christie, but not all the new fortunes are being carved out the risky, adventurous way.

And the enterprising salesman was not the only one to whom this same general idea has occurred. Americans are now “discovering” Rhodesia with outstanding success, to wit: Several have opened U.S.-style motels, complete with bars, restaurants and good service. They are fantastically successful. There are also a few drive-in movies, Yank-owned and coining money.

In Central Africa, there is Bert Howard, a former G. I. who runs a thriving ostrich-feather export house.

Another American exports crocodile skins; still another buys and exports ivory. One of the most unusual exports from the continent is anti-snake bite serum; it’s mighty profitable for the Nyasaland snake farmer who dreamed up the idea.

Success stories? You’ll find them all over Africa. Emile Pagnon came to Morocco dead broke at the age of 32. Now he has 4,000 acres of the finest ranch land and is one of the wealthiest Europeans in the country. In the Congo an immigrant asked himself, “How about a resort for the folks who are getting rich here?” He scraped up money to start one: the Lido Pool at Elizabethville, which soon became a favored oasis for wealthy Europeans.

In Monrovia, capitol of Liberia, there is a local institution called the Pepper Bird. It’s a combination restaurant, night club and assembly hall for government functions. It has African murals from Greenwich Village, N. Y., and a juke box that plays hill-billy music. It’s owner? A barrel-chested Syrian-American from Brooklyn.

Interested? Then let’s get to some basic info on how you can get there. First, about jobs for the guys who just want to get on the premises and then look about: two classes of jobs are available—those in U. S. Government work and those in private industry.

For government jobs, the ordinary civil service regulations do not apply as a general rule. The agency doing the hiring generally picks the people it wants without even consulting the Civil Service Commission.

To get a line on U. S. job opportunities in Africa write to Office of Personnel, Department of Agriculture, Washington 25, D. C., for the story on jobs for farm specialists; to Division of Personnel Management, Department of the Interior, Washington 25, D. C., for information on jobs in mining, waterpower development, fishery management, biology, geology, land management; to Commander, U. S. Naval Activities, Port Lyautey, c/o Fleet Post Office, New York, N. Y., for the word on Navy jobs for civilians in French Morocco.

For jobs in American industries in Africa, drop a line to the U. S. Chamber of Commerce in any country there and ask who’s hiring. Addresses of the Chambers can be gotten from the U. S. C. of C., Washington 6, D. C. Ask for the free listing of American Chambers of Commerce in Foreign Countries.

A good example of the Yank outfits in Africa is Firestone Tire and Rubber Co. Firestone employs foresters, agricultural specialists, nurses, lab technicians, sanitation engineers, accountants, mechanics and machinists. (Write to Personnel Dept., The Firestone Tire and Rubber Co., Akron 17, Ohio.) To go to Africa on your own, you need (a) a passport and (b) a visa, the former obtained from your country, the latter from the country for which you’re headed.

The various countries “have different admission requirements, but generally you need either a certain amount of money or a job to get in. More detailed information can be obtained from the countries themselves.

Can you take money out of Africa if you hit the jackpot so hard it clangs? That depends on the country—each has its own regulations on this—but most countries do permit individuals to take out a percentage of their earnings.

Now obviously, while it’s true that a rip-roaring boom is underway in Africa, there are drawbacks too. Let’s list some: Climate is one factor which must be considered strongly. South Africa, Liberia, coastal areas in the north generally have excellent climatic conditions but there are sections deep inside where the jungle is steaming, the rain seems to fall incessantly and the insects make life one long itch.

Racial tension is another vital consideration. Kenya, for instance, has its terrible Mau Maus, now on the wane but still something to reckon with. In the Union of South Africa, there is immense, unorganized resentment growing among the non-whites against the white man’s absolute, rigid supremacy. And a good place to stay away from is the shooting-war area of Algeria where the tide of hate runs high. But the timid and overly delicate have never thrived in the world’s frontiers. You can’t go fortune-hunting anywhere with an absolute guarantee of personal safety and the assurance that your finer feelings will never be offended. Africa today is the Bright Continent, lit with a blaze of opportunity for the venturesome.