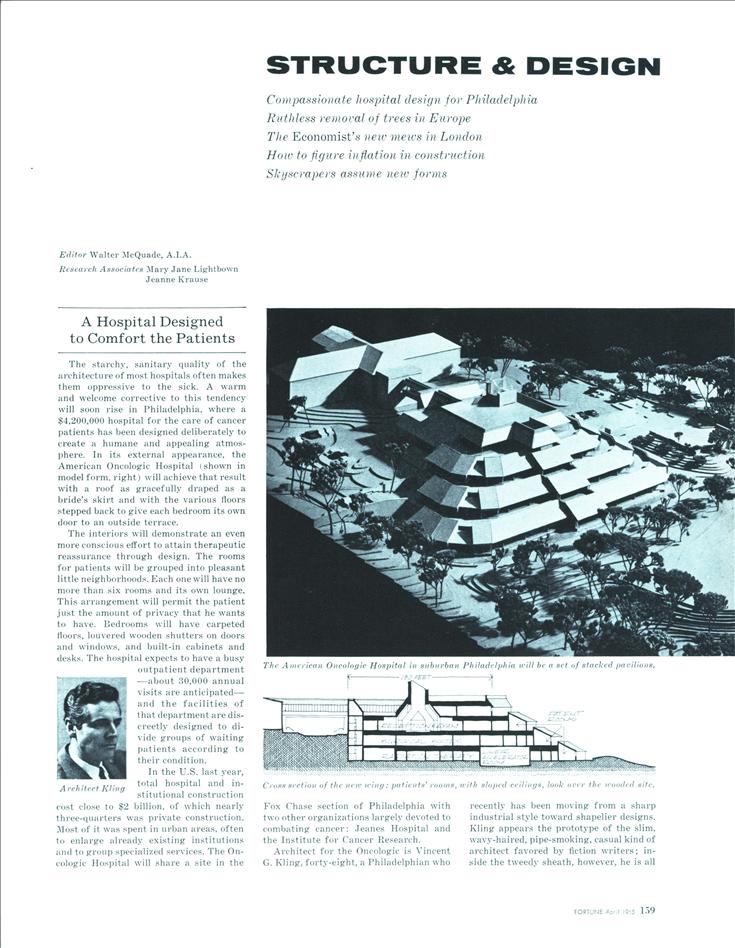 A Hospital Designed to Comfort the Patients

The starchy, sanitary quality of the architecture of most hospitals often makes them oppressive to the sick. A warm and welcome corrective to this tendency will soon rise in Philadelphia, where a $4,200,000 hospital for the care of cancer patients has been designed deliberately to create a humane and appealing atmosphere. In its external appearance, the American Oncologic Hospital (shown in model form, right) will achieve that result with a roof as gracefully draped as a bride’s skirt and with the various floors stepped back to give each bedroom its own door to an outside terrace.

The interiors will demonstrate an even more conscious effort to attain therapeutic reassurance through design. The rooms for patients will be grouped into pleasant little neighborhoods. Each one will have no more than six rooms and its own lounge. This arrangement will permit the patient just the amount of privacy that he wants to have. Bedrooms will have carpeted floors, louvered wooden shutters on doors and windows, and built-in cabinets and desks. The hospital expects to have a busy outpatient department —about 30,000 annual visits are anticipated—-and the facilities of that department are discreetly designed to divide groups of waiting patients according to their condition.

In the U.S. last year, total hospital and institutional construction cost close to $2 billion, of which nearly three-quarters was private construction. Most of it was spent in urban areas, often to enlarge already existing institutions and to group specialized services. The Oncologic Hospital will share a site in the Fox Chase section of Philadelphia with two other organizations largely devoted to combating cancer: Jeanes Hospital and the Institute for Cancer Research.

Architect for the Oncologic is Vincent G. Kling, forty-eight, a Philadelphian who recently has been moving from a sharp industrial style toward shapelier designs. Kling appears the prototype of the slim, wavy-haired, pipe-smoking, casual kind of architect favored by fiction writers; inside the tweedy sheath, however, he is all cool efficiency. In 1946 he left a designer’s job at Skidmore, Owings & Merrill to set up his own office in Philadelphia. Several of his buildings have won prizes for their sleek functionalism.

Kling’s new style, emerging in the Oncologic Hospital, is also seen in the Philip T. Sharpies Dining Hall at Swarthmore (below). The building sits between an area of residential-scale fraternity lodges and the two big gray Victorian buildings that house most of the college classrooms. In its own way, the new dining hall is a match for the Victorian mammoths, not only in material but in its looming shape.

The streets of the Great Society, President Johnson has declared, ought to be shaded and lined with trees. Such words from such a source have proved meat and drink to U.S. conservationists, who have been encouraged in fights to save the red- woods of California and the sycamores around Boston. Ironically, however, the conservationists of Europe, whose environment is so often idealized in American minds, have been losing ground—and trees. ? Punishing the Italian poplars. The Italian national agency for highways, Azienda Nazionale Autonoma Delle Strade, mailed a circular to all its department heads last year advising them to use the ax if trees impeded visibility on curves. Large and lovely trees soon began to topple, particularly in Tuscany and in the north country around Milan and Turin. On one highway through a hunting preserve near Como, ANAS crews took so savage a toll that complaints poured in from conservationists, who said that “No Passing” signs would have sufficed. But ANAS spokesmen shrugged and replied that Italian drivers would never slow down in open country; ANAS had to “save Italian drivers from themselves.”

Meanwhile, trees were also being cut down in urban areas. The avenues of Rome were not exempt. Responding to public protests, the Italian Minister of Public Works has appointed a commission to recommend a policy wiser than the blind slaughter of trees. But considerable numbers of poplars are already lost. Pruning in Spain. Spanish officialdom is even less accommodating than Italian. When a horrified Barcelona architect wrote indignantly in Serra d’Or, a Benedictine magazine, about the despoiling of plane trees along the roadsides of Catalonia, he was hauled into court by the highway builders. Charged with “insults to state bureaucracy,” he was finally declared not guilty, but numerous trees were left pathetically truncated.

When London’s Economist announced in 1961 that architects Peter and Alison Smithson had been selected to design its new headquarters group on St. James’s Street in London, the choice seemed an odd one. The young Smithsons, husband and wife, were the belligerent protagonists of the New Brutalism—a movement specializing in burly, raw modern buildings deliberately refuting English architectural gentility. St. James’s Street hardly seemed the place for brutality; it is lined with old buildings that shelter such elegant shops as Lock the hatter, and Lobb, bootmaker to the Duke of Edinburgh, as well as gentlemen’s clubs like the Devonshire, Brooks’s, White’s, the Carlton, and Boodle’s.

But the early alarm soon died down. The Smithsons have labored successfully to produce a charming mews. On a paved courtyard opened to St. James’s Street they arranged three buildings: a bank with shops to front directly on St. James’s; behind it the sixteen-story Economist tower; and a block of apartments; all are bold in materials but discreet in shape. Staid old Boodle’s, instead of being injured, picked up an additional bay window facing into the courtyard.

This rare coincidence of structural conviction and strength in context is not the general rule in London. The city has been cheapened in recent years with so much monstrous speculative office building that the Labor party, when it came to power, abruptly brought new office building to a halt. In the calm that has ensued, the Economist Building has stood as a model. Sir Geoffrey Crowther, chairman of the Economist, concedes that a monolith of larger size on the site would have been more profitable, but views the $6-million investment as “financially successful.” Speaking of his architects, the chairman adds: “Our only hope of immortality is as a footnote to them. Who, after all, were Sir Christopher Wren’s clients? . . . We met the Smithsons six years ago with trepidation and take leave of them now with affection and awe.”

How to Budget for Inflation in Construction

How to figure out what inflation will do to estimates of costs for heavy construction jobs long has baffled both clients and contractors. The vague, provisory phrase adding “10 percent for contingencies,” which has been the standard means relied on to cover inflation (as well as other eventualities), has become a sketchy and often inadequate protection for both parties. There are ways of doing better.

Five years ago San Francisco’s Bay Area Rapid Transit District was charged with designing and estimating the costs of a new mass-transit system. The district knew that construction of the system would be a slow process. First, a bond issue had to be carried by popular vote. After approval of the issue, the money became available for the project only as bond issues were sold. And, as a practical matter, not all the streets along the route could be torn up at the same time, and not all local contracting companies could be employed simultaneously in the city’s work. Looking at all that, the district engineers estimated that the job would not be finished until 1971.

The district’s solution to the inflationary pressures that were bound to appear over a ten-year period was spectacularly sound. Its engineers, Parsons Brinckerhoff-Tudor-Bechtel, plotted the course of local inflation, from 1945 on, in various categories of heavy construction from excavation to aerial construction (necessary because 41 percent of the system will be elevated). Correlating the past with the estimates of the future, the district concluded that inflation might eat up around 30 percent of the budgeted amounts before the work could be completed. Facing the matter courageously, it frankly added 20 percent for inflation to the standard 10 percent contingency. The 30 percent represented $190 million of the total $792-million bond issue, which the voters approved in 1962.

Now the wisdom of that procedure has become eminently clear. Five years after the initial estimates were made, the job is at midpoint in time, and inflation has been doing just about what it was expected to do. It has been adding to building costs at about 3 percent per year, only slightly ahead of its anticipated rate.

Early in this century skyscrapers were towers that grew narrower as they grew taller, often ending in delicate spires. Then the R.C.A. Building in Rockefeller Center demonstrated the grace and utility possible in an upright slab. Since that time most skyscrapers not forced into awkward shapes by building codes have been modified slabs, whose shapes followed the general proportions of king-sized cigarette packs.

But anyone taking a searching look at the urban skyline in the U.S. knows that clients’ ambition for individuality and designers’ will to invent are now changing the traditional silhouettes. The biggest postwar office building, Pan Am in Manhattan (designed by Emery Roth & Sons, with Walter Gropius and Pietro Belluschi as design consultants), is an immense eight-sided affair. Fattened too much, it does not compare favorably with the slender, graceful Pirelli Building—also a polygon—built earlier in Milan by Gio Ponti and Pier Luigi Nervi. (But Pirelli has such small floor areas that it would be a financial fiasco on the costly Pan Am site.) The Phoenix Mutual Life Insurance Building (architect, Harrison & Abramovitz) went beyond the shape of the Pirelli Building by putting new stress on sharply ended curves.

The National Geographic Society headquarters in Washington, D.C. (Edward Durell Stone, architect), is a conventional shape, but an old device, the overhanging cornice, succeeds in giving it a new look.

Kaiser Industries chose a long crescent for its Oakland headquarters (Welton Becket, architect). Minora Yamasaki’s recent Northwestern National Life Insurance Building in Minneapolis is a skyscraper on its side, using a columned porch, which has ancient echoes, to achieve its modern air. The new city hall (architects: the late Viljo Revell and John B. Parkin Associates) in Toronto places two tall curves of office space around a low council chamber.

Many more shapes are coming off drawing boards (below). They range from Yamasaki’s double spires for Manhattan to the low concrete Boston City Hall, which is complemented by a crescent-shaped, low office building nearby. end