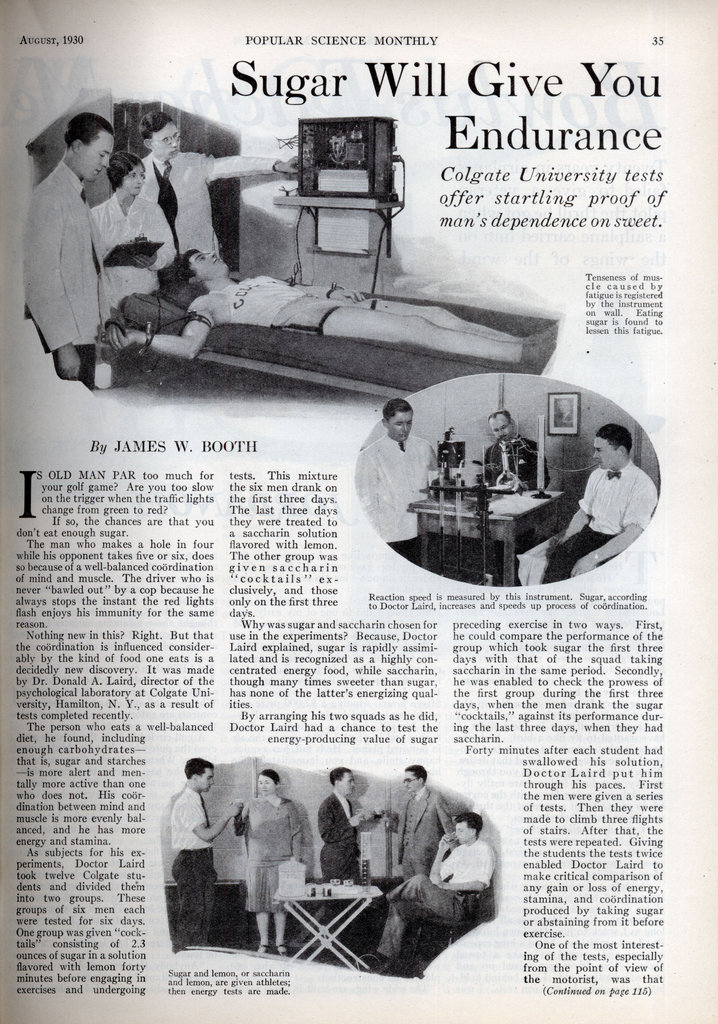 Sugar Will Give You Endurance

IS OLD MAN PAR too much for your golf game? Are you too slow on the trigger when the traffic lights change from green to red?

If so, the chances are that you don’t eat enough sugar.

The man who makes a hole in four while his opponent takes five or six, does so because of a well-balanced coordination of mind and muscle. The driver who is never “bawled out” by a cop because he always stops the instant the red lights flash enjoys his immunity for the same reason.

Nothing new in this? Right. But that the coordination is influenced considerably by the kind of food one eats is a decidedly new discovery. It was made by Dr. Donald A. Laird, director of the psychological laboratory at Colgate University, Hamilton, N. Y., as a result of tests completed recently.

The person who eats a well-balanced diet, he found, including enough carbohydratesâ€” that is, sugar and starches â€”is more alert and mentally more active than one who does not. His coordination between mind and muscle is more evenly balanced, and he has more energy and stamina.

As subjects for his experiments, Doctor Laird took twelve Colgate students and divided them into two groups. These groups of six men each were tested for six days. One group was given “cocktails” consisting of 2.3 ounces of sugar in a solution flavored with lemon forty minutes before engaging in exercises and undergoing tests. This mixture the six men drank on the first three days. The last three days they were treated to a saccharin solution flavored with lemon. The other group was given saccharin “cocktails ” exclusively, and those only on the first three days.

Why was sugar and saccharin chosen for use in the experiments? Because, Doctor Laird explained, sugar is rapidly assimilated and is recognized as a highly concentrated energy food, while saccharin, though many times sweeter than sugar, has none of the latter’s energizing qualities.

By arranging his two squads as he did, Doctor Laird had a chance to test the

Forty minutes after each student had swallowed his solution, Doctor Laird put him through his paces. First the men were given a series of tests. Then they were made to climb three flights of stairs. After that, the tests were repeated. Giving the students the tests twice enabled Doctor Laird to make critical comparison of any gain or loss of energy, stamina, and coordination produced by taking sugar or abstaining from it before exercise.

One of the most interesting of the tests, especially from the point of view of the motorist, was that measuring the men’s ability to fix their attention on a mobile object. In this experiment an instrument known as a Marietta complication clock was used. It consists of a large dial divided into 100 degrees, with a single hand revolving once a minute; in other words, an oversized stop watch measuring time in hundredths of a minute. At certain fixed positions of the hand, a light, placed above the clock dial, is flashed on without warning. The person taking the test must tell where the hand is pointing when the light is flashed.

How did the sugar boys compare with the saccharin boys? The group taking sugar improved 5.5 percent when its performance in the test after exercise was checked against that before exercise. The squad drinking the saccharin solution showed a loss of 9.4 percent! The performance of the first group on the last three days, when it was given saccharin, was slightly inferior to that on the first three days.

In another test, determining the speed of the subject’s reaction, it was found again that the men drinking the sugar mixture had the advantage. Reaction was timed with a Marietta chronoscope, measuring time in thousandths of a second.

The student sat at a telegraph key, facing a small flashlight bulb. He was told to raise his hand from the key as quickly as possible when the light flashed. The experimenter pressed a switch, the light flashed, the student released the key, and the chronoscope recorded the speed of his reaction in thousandths of a second. What happened was that the current, flowing through the switch operating the light, also caused the time recording instrument to mark the beginning of the time interval. The student, by raising his hand from the key, opened a second circuit through which another current was flowing. This caused the chronoscope to record the end of the time interval.

DURING the first three days, the group that took sugar showed a gain in speed of 5.7 percent when the tests before and after exercise were compared, while the saccharin squad registered a loss of 2.1 percent. The first group showed a loss of 5.2 percent on the last three days, when it took saccharin, despite the fact that the men had the benefit of practice on the first three days. This experiment indicated, according to Doctor Laird, that an athlete who munches a lump or two of sugar before a race ought to break the tape ahead of a runner who does not.

Students in whom loss of sleep had caused fatigue were also tested. It was assumed that sugar would be beneficial in such cases, and experiments, Doctor Laird said, confirmed this belief. Students were kept awake all night, being fed on sugar or foods that contained sugar. It was found that their nerves did not become frayed, that they had little difficulty in remaining awake, and recuperated entirely during a thirteen-hour sleep. A second test, without the energizing sugar, showed that the subjects had difficulty keeping awake, became nervous and irritable, and at the end required more sleep to refresh themselves.

As a result of these tests, it is assumed by Doctor Laird that workers who find it necessary to stay awake for long periods can offset fatigue by the use of sugar in some form.

The standard tracing board test was used by Doctor Laird to discover what difference the use or nonuse of sugar might make in a person’s steadiness of hand. Once more, the sugar squad won, with an improvement of 4.2 percent. The saccharin men showed no improvement whatever, and the first group improved only 2.1 percent on the last three days of the experiment, when it took the saccharin “cocktail” instead of the sugar.