Mechanix Illustrated
Issue: Apr, 1957
Posted in: How to
No Comments on Suggest Your Way To Success (Apr, 1957) 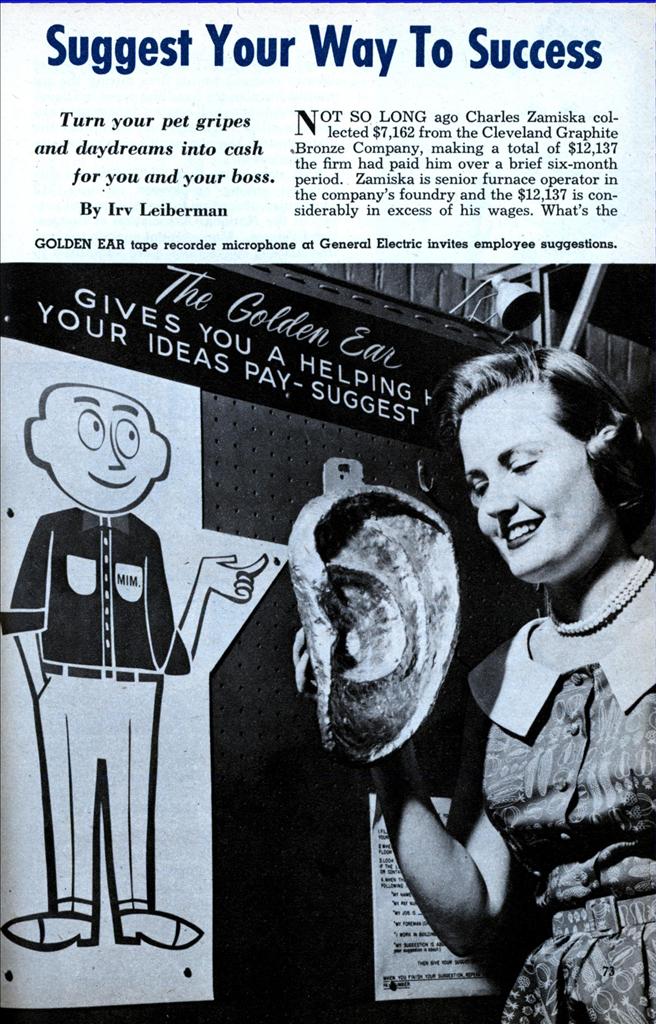 Suggest Your Way To Success

Turn your pet gripes and daydreams into cash for you and your boss.

NOT SO LONG ago Charles Zamiska collected $7,162 from the Cleveland Graphite Bronze Company, making a total of $12,137 the firm had paid him over a brief six-month period. Zamiska is senior furnace operator in the company’s foundry and the $12,137 is considerably in excess of his wages. What’s the story? The $12,137 equals 25 per cent of savings realized by his firm during the six months his plan for handling cores in Cleveland Graphite’s shell casting department has been in effect. Charlie had submitted the plan through the company’s employee suggestion system.

Last year more than $2,330,000 was distributed among employees of only 312 companies, according to the most recent survey of the National Association of Suggestion Systems. Management goes on to show that 520,452 suggestions were submitted to these 312 companies with an average acceptance of 26 per cent, or $17.50 per person. Of course, the 312 companies covered by the N. A. S. S. survey represent only a drop in the industrial bucket. Thousands of or- ganizations maintain suggestion systems.

The Eastman Kodak Company, which awarded $336,962 for suggestions last year, sent one employee a whopping $11,386 check for a suggestion on how to revise a stacking assembly fixture. The Firestone Tire and Rubber Company paid $4,000 for an idea on how to improve the quality of Foamex cushions.

Are you cashing in on the suggestion bonanza? If not, there’s a systematic way to do it. Some companies, like General Motors, try to help their employees get ideas by distributing booklets containing “thought-starters.” You may find it helpful to ask yourself these pertinent questions about your job:

1. Can a less expensive material be used? One Westinghouse employee suggested using extruded aluminum instead of machined aluminum bar stock for rotor wedges and earned $4,008.

2. Can the material used be cut or trimmed differently for greater economy or efficiency? An employee in a national firm’s transportation and generator division got $5,085 for suggesting a new way to make mica insulation sheets.

3. Can the operation be made safer? A plant layout engineer was awarded $2,400 for a safety suggestion.

4. Can any improvement be made in a particular operation? A new method for aligning generator blower blades won $1,990.

5. Can packing and shipping methods be improved? An Eastman Kodak worker received an award of $1,500 for suggesting different packaging for sensitized paper.

6. Can quality be improved? Douglas G. Wood, an employee of the Canadian Shredded Wheat Company, hit his company’s jackpot of $2,500 for a suggestion concerning the cooking process for Shreddies, a bite-size whole-wheat cereal.

7. Can production cost be cut? An assembly-line worker at the Whirlpool Corporation factory at St. Joseph, Mich., made a suggestion that cut the cost of an automatic washer by five cents each, and collected $4,000.

Nearly 75 years old, the employee suggestion system was devised when several corporation presidents discovered that there was no way for workers to turn in their ideas. The suggestion-box system was the first step, but in most plants it was run on haphazard lines.

During World War II, however, industry ran head-on into severe manpower shortages and ideas were needed to simplify methods. The suggestion system was revived on a scientific basis. A new type of personnel executive emerged—^the suggestion-system administrator. Several banded together and formed an information-swapping organization, the National Association of Suggestion Systems. Today the N. A. S. S. has more than 900 members in the U. S., Canada and other countries.

Some suggestion systems take into account the workers who are not adept at expressing themselves in writing. The value of this system-was shown recently at the American Steel Foundries plant in Hammond, Ind. For months the company’s engineers had been struggling to develop a forged brakehead for locomotives and railroad cars. Steve Sabo, a Hungarian immigrant who had never completed grade school, watched their activities from the forge shop where he had worked for 35 years. Then one day he laboriously scrawled a message on a suggestion form. He wrote that he knew how to make the forging but couldn’t put it on paper.

Incredulous, the engineers went to the forge shop—and sure enough, Sabo had worked out the method they had been searching for. American Steel Foundries now makes Sabo’s forged brakehead and the worker was given the company’s maximum bonus of $2,500.

Most systems today, while stressing improvement of management-labor relations, frankly acknowledge that ideas earn money for the company. Usually they pay a percentage of the savings the first year a suggestion is in effect.

Many companies impose limits, too, although the average percentage paid is between 10 and 15 per cent, according to one survey. Some firms pay 25, 50 and even 100 per cent of the first year’s savings. The largest cash award on record was for $28,006.46 paid by the Cleveland Graphite Bronze Company which allows 25 per cent of the net first year’s savings and has no limit.

“But,” you may protest, “my outfit has no suggestion system.” Well, you can suggest that your company institute a suggestion program—that can be your first bright idea. Ask your employer to study closely the theory behind suggestion systems. Point out that improved industrial relations result from suggestions systems.

Your reward may not be money or promotion at the outset. Some firms pass out certificates of merit for minor suggestions while others honor workers with pins. But have patience. The certificate or the pin of today means dollar bills or advancement tomorrow. No company can long ignore the man concerned with its best interests.

One word of caution, however. Use common sense and do not flood the box with the first ideas that pop into your head. Your future with the firm will depend not on the quantity of suggestions but on the quality. But don’t be left by the wayside. Pick up that pencil. Get your share! •