Heh, could you imagine this club now? The liability for the city would be insane if someone ever got hurt.

“So, let me get this straight…. you had the children build their own diving suits made out of water heaters and garden hoses, then sent them down into dangerous wrecks. Didn’t you think it might be a bit dangerous?” 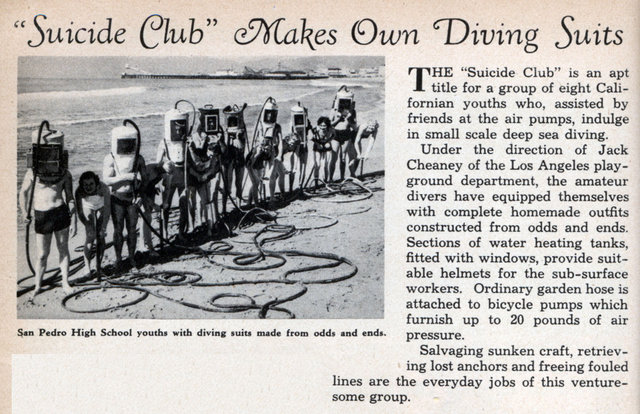 “Suicide Club” Makes Own Diving Suits
THE “Suicide Club” is an apt title for a group of eight Cali-fornian youths who, assisted by friends at the air pumps, indulge in small scale deep sea diving.

Under the direction of Jack Cheaney of the Los Angeles playground department, the amateur divers have equipped themselves with complete homemade outfits constructed from odds and ends. Sections of water heating tanks, fitted with windows, provide suitable helmets for the sub-surface workers. Ordinary garden hose is attached to bicycle pumps which furnish up to 20 pounds of air pressure.