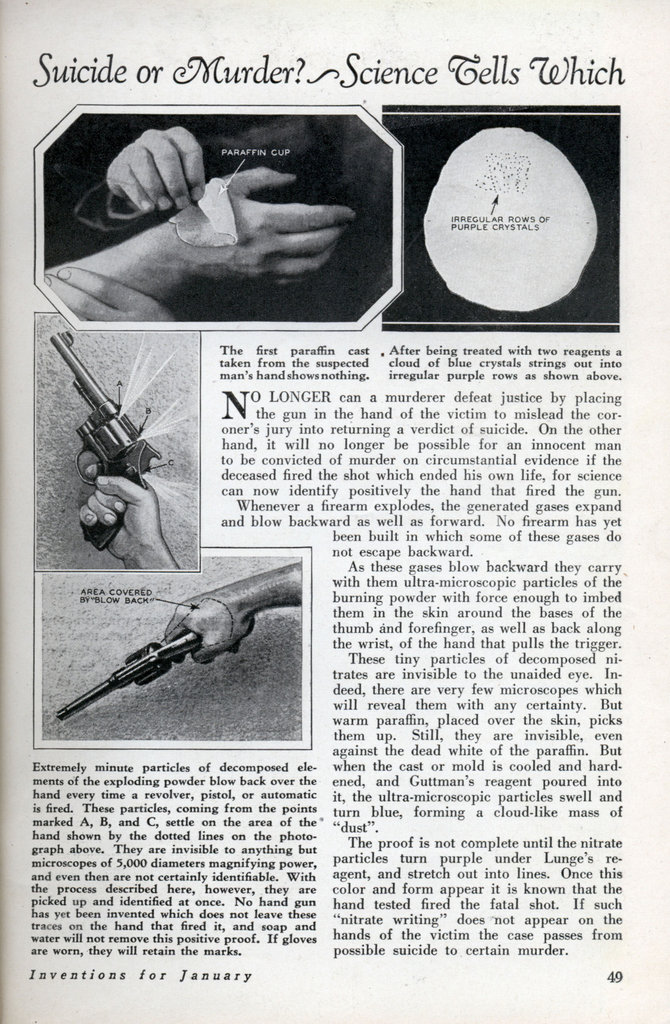 Suicide or Murder? ~ Science Tells Which

NO LONGER can a murderer defeat justice by placing the gun in the hand of the victim to mislead the coroner’s jury into returning a verdict of suicide. On the other hand, it will no longer be possible for an innocent man to be convicted of murder on circumstantial evidence if the deceased fired the shot which ended his own life, for science can now identify positively the hand that fired the gun. Whenever a firearm explodes, the generated gases expand and blow backward as well as forward. No firearm has yet been built in which some of these gases do not escape backward.

As these gases blow backward they carry with them ultra-microscopic particles of the burning powder with force enough to imbed them in the skin around the bases of the thumb and forefinger, as well as back along the wrist, of the hand that pulls the trigger.

These tiny particles of decomposed nitrates are invisible to the unaided eye. Indeed, there are very few microscopes which will reveal them with any certainty. But warm paraffin, placed over the skin, picks them up. Still, they are invisible, even against the dead white of the paraffin. But when the cast or mold is cooled and hardened, and Guttman’s reagent poured into it, the ultra-microscopic particles swell and turn blue, forming a cloud-like mass of “dust”.

The proof is not complete until the nitrate particles turn purple under Lunge’s reagent, and stretch out into lines. Once this color and form appear it is known that the hand tested fired the fatal shot. If such “nitrate writing” does not appear on the hands of the victim the case passes from possible suicide to certain murder.