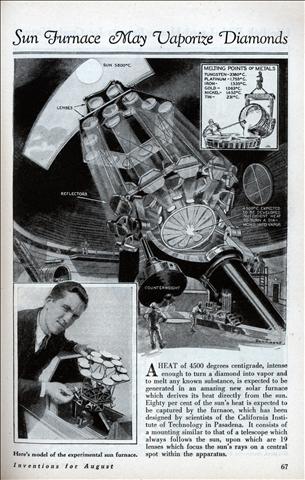 Sun Furnace May Vaporize Diamonds
A HEAT of 4500 degrees centigrade, intense enough to turn a diamond into vapor and to melt any known substance, is expected to be generated in an amazing new solar furnace which derives its heat directly from the sun. Eighty per cent of the sun’s heat is expected to be captured by the furnace, which has been designed by scientists of the California Institute of Technology in Pasadena. It consists of a mounting similar to that of a telescope which always follows the sun, upon which are 19 lenses which focus the sun’s rays on a central spot within the apparatus.