Well, he wasn’t misquoted. According to wikipedia he said:

“There is no likelihood man can ever tap the power of the atom. The glib supposition of utilizing atomic energy when our coal has run out is a completely unscientific Utopian dream, a childish bug-a-boo. Nature has introduced a few fool-proof devices into the great majority of elements that constitute the bulk of the world, and they have no energy to give up in the process of disintegration.” – 1928 at the Chemists’ Club (New York)

He also got the first Physics Ph.D from Columbia and discovered the mass and charge of the electron, which won him the Nobel prize in 1923 so I guess we can cut him a little slack. 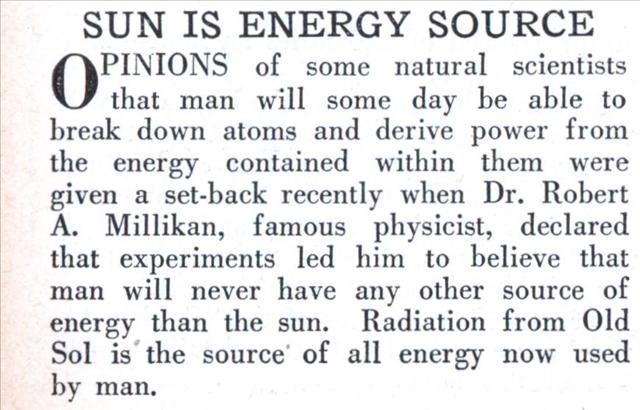 OPINIONS of some natural scientists that man will some day be able to break down atoms and derive power from the energy contained within them were given a set-back recently when Dr. Robert A. Millikan, famous physicist, declared that experiments led him to believe that man will never have any other source of energy than the sun. Radiation from Old Sol is the source of all energy now used by man.