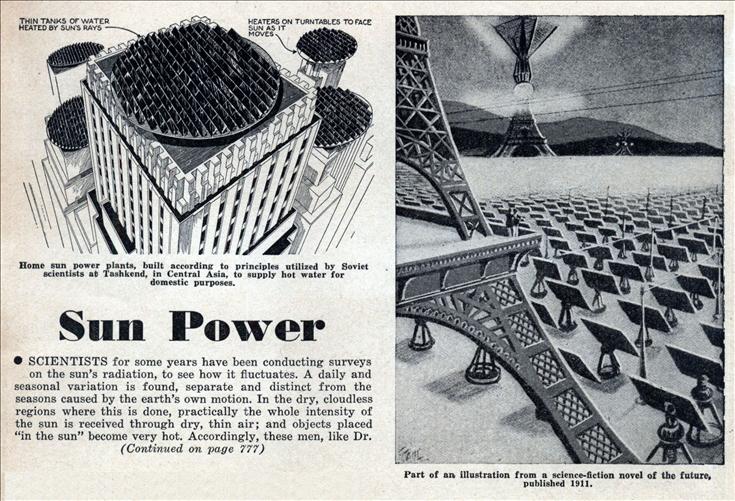 SCIENTISTS for some years have been conducting surveys on the sun’s radiation, to see how it fluctuates. A daily and seasonal variation is found, separate and distinct from the seasons caused by the earth’s own motion. In the dry, cloudless regions where this is done, practically the whole intensity of the sun is received through dry, thin air; and objects placed “in the sun” become very hot. Accordingly, these men, like Dr. Abbot, of the Smithsonian Institution, or the Russian scientists working in Turkestan, have built conveniences to utilize a little of the surplus energy they are working on, for heating water, cooking, etc. The Tashkend, Central Asia, group, recently published in Russian magazines a proposal for utilizing the sun’s rays at low cost— not for electric power, but for heating rooms, cooking, and providing hot water. Tanks, with black surfaces, properly insulated, and turned full toward the sun, will heat water almost to boiling.

It is interesting to compare the proposed solar heaters, revolving to face the sun, with a project of, supposedly, the year 2660, which appeared twenty-four years ago in a novel written by the Editor of this magazine, and entitled “Ralph 124C 41 + .” The illustration, part of which is reproduced here, shows a field of sun-power devices, rotating to face the sun, in a field electrically rid of fog and moisture.