Modern Mechanix
Issue: Sep, 1929
Posted in: Origins, Personal Appearance
2 Comments on Sunburn Is “Made to Order” for Customers by Portrait Photographer (Sep, 1929)

Sunburn Is “Made to Order” for Customers by Portrait Photographer (Sep, 1929)

I wonder when people started using the term suntan instead of sunburn. I wouldn’t be surprised if it was invented by Coppertone to distinguish between a “good” sunburn and a “bad” sunburn. 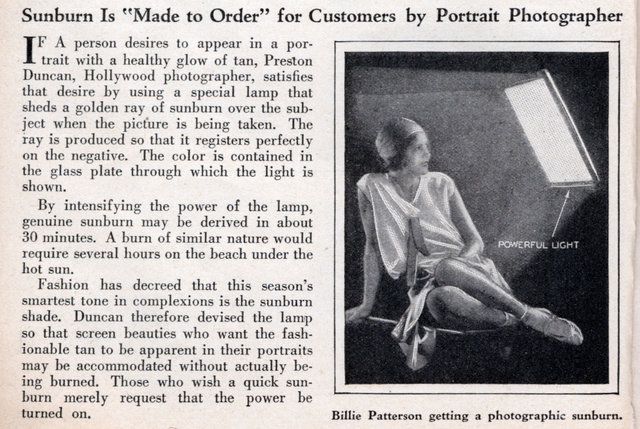 Sunburn Is “Made to Order” for Customers by Portrait Photographer

IF A person desires to appear in a portrait with a healthy glow of tan, Preston Duncan, Hollywood photographer, satisfies that desire by using a special lamp that sheds a golden ray of sunburn over the subject when the picture is being taken. The ray is produced so that it registers perfectly on the negative. The color is contained in the glass plate through which the light is shown.

By intensifying the power of the lamp, genuine sunburn may be derived in about 30 minutes. A burn of similar nature would require several hours on the beach under the hot sun.

Fashion has decreed that this season’s smartest tone in complexions is the sunburn shade. Duncan therefore devised the lamp so that screen beauties who want the fashionable tan to be apparent in their portraits may be accommodated without actually being burned. Those who wish a quick sunburn merely request that the power be turned on.