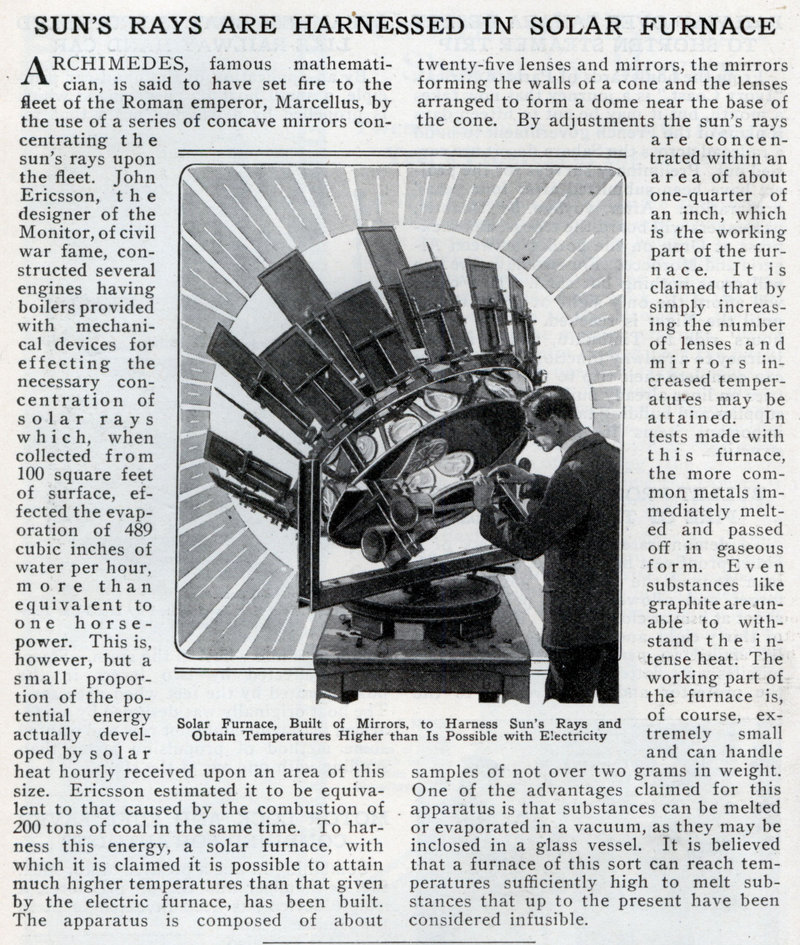 ARCHIMEDES, famous mathematician, is said to have set fire to the fleet of the Roman emperor, Marcellus, by the use of a series of concave mirrors concentrating the sun’s rays upon the fleet. John Ericsson, the designer of the Monitor, of civil war fame, constructed several engines having boilers provided with mechanical devices for effecting the necessary concentration of solar rays which, when collected from 100 square feet of surface, effected the evaporation of 489 cubic inches of water per hour, more than equivalent to one horsepower. This is, however, but a small proportion of the potential energy actually developed by solar heat hourly received upon an area of this size. Ericsson estimated it to be equivalent to that caused by the combustion of 200 tons of coal in the same time. To harness this energy, a solar furnace, with which it is claimed it is possible to attain much higher temperatures than that given by the electric furnace, has been built. The apparatus is composed of about twenty-five lenses and mirrors, the mirrors forming the walls of a cone and the lenses arranged to form a dome near the base of the cone. By adjustments the sun’s rays are concentrated within an area of about one-quarter of an inch, which is the working part of the furnace. It is claimed that by simply increasing the number of lenses and mirrors increased temperatures may be attained. In tests made with this furnace, the more common metals immediately melted and passed off in gaseous form. Even substances like graphite are unable to withstand the intense heat. The working part of the furnace is, of course, extremely small and can handle samples of not over two grams in weight. One of the advantages claimed for this . apparatus is that substances can be melted or evaporated in a vacuum, as they may be inclosed in a glass vessel. It is believed that a furnace of this sort can reach temperatures sufficiently high to melt substances that up to the present have been considered infusible.