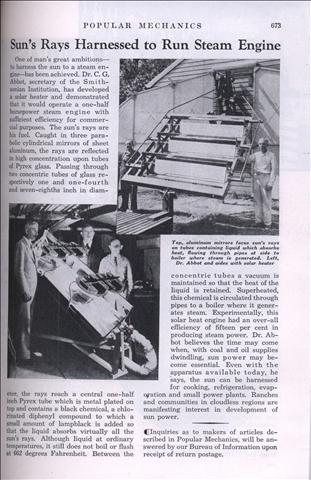 One of man’s great ambitionsâ€” to harness the sun to a steam engineâ€”has been achieved. Dr. C. G. Abbot, secretary of the Smithsonian Institution, has developed a solar heater and demonstrated that it would operate a one-half horsepower steam engine with sufficient efficiency for commercial purposes. The sun’s rays are his fuel. Caught in three parabolic cylindrical mirrors of sheet aluminum, the rays are reflected in high concentration upon tubes of Pyrex glass. Passing through two concentric tubes of glass respectively one and one-fourth and seven-eighths inch in diameter, the rays reach a central one-half inch Pyrex tube which is metal plated on top and contains a black chemical, a chlorinated diphenyl compound to which a small amount of lampblack is added so that the liquid absorbs virtually all the sun’s rays. Although liquid at ordinary temperatures, it still does not boil or flash at 662 degrees Fahrenheit. Between the concentric tubes a vacuum is maintained so that the heat of the liquid is retained. Superheated, this chemical is circulated through pipes to a boiler where it generates steam. Experimentally, this solar heat engine had an over-all efficiency of fifteen per cent in producing steam power. Dr. Abbot believes the time may come when, with coal and oil supplies dwindling, sun power may become essential. Even with the apparatus available today, he says, the sun can be harnessed for cooking, refrigeration, evaporation and small power plants. Ranches and communities in cloudless regions are manifesting interest in development of sun power.