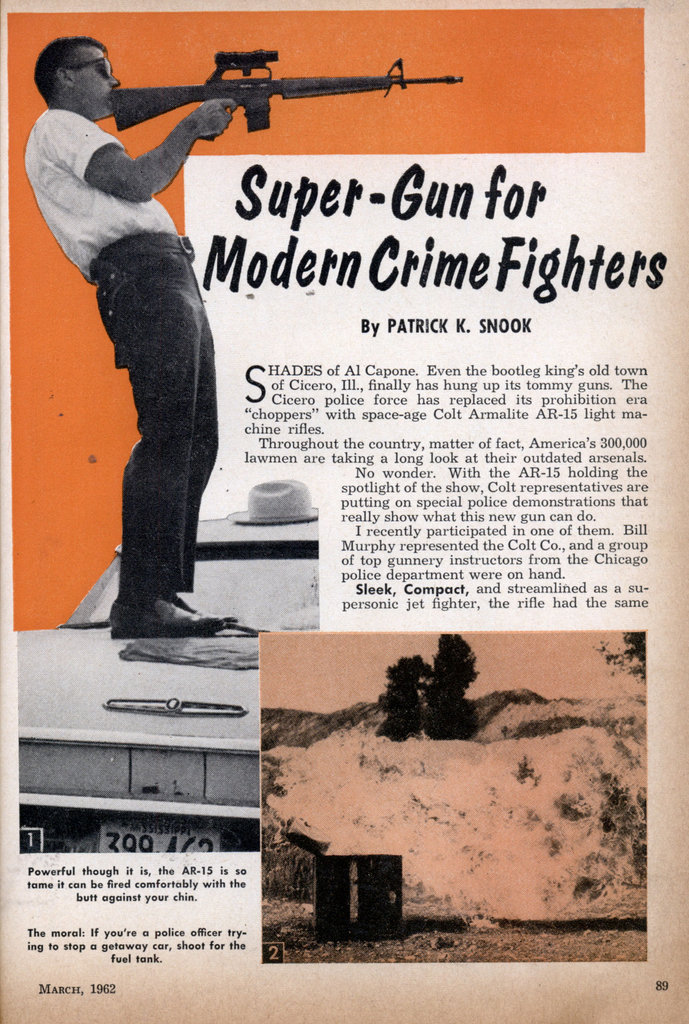 Throughout the country, matter of fact, America’s 300,000 lawmen are taking a long look at their outdated arsenals.

No wonder. With the AR-15 holding the spotlight of the show, Colt representatives are putting on special police demonstrations that really show what this new gun can do.

I recently participated in one of them. Bill Murphy represented the Colt Co., and a group of top gunnery instructors from the Chicago police department were on hand.

Sleek, Compact, and streamlined as a supersonic jet fighter, the rifle had the same sinister beauty as a coiled copperhead.

The first surprise came when one of the officers picked up the rifle. “What’s it made of?” he gasped. “It’s light as a feather.” By extensive use of fiber glass and lightweight alloys, the designers held the rifle’s weight to an unbelievable 6 lbs., one-third the weight of the Thompson sub-machine gun.

Unlike the Thompson and most other full-automatic weapons, the AR-15 can be controlled when it’s fired. Usually, the first few shots from a hand-held fully-automatic weapon hit the target and the rest go over it. The vicious recoil causes the gun to “climb” with each shot. To compensate for this, the usual technique is to let off a few shots at a time and reposition the gun between bursts.

“There is your adversary, gentlemen,” announced Murphy. Fifty yards downrange stood a standard police silhouette target, the black shape of a man. Murphy slammed the rifle to his shoulder, squeezed the trigger, and in less than two seconds poured 20 shots into the target. Not at the target, but into it. Sixteen of the shots were in the “fatal” area, two were misses, and either of the other two would have put the man out of action. The design of the gun has practically eliminated “climb,” and the recoil is so slight as to be hardly noticeable.

One-Handed Wonder. I tried the rifle and found it so light and easy to handle that I could hold it comfortably with one hand and fire short, accurate bursts (Fig. 4).

Murphy’s next move was to demonstrate that the versatile gun could save taxpayers’ money by replacing three of the four basic police special service weaponsâ€”the shotgun, gas gun, machine gun, and scope-sighted high power rifle.

“The shotgun, we don’t claim to replace,” Murphy said, “but we can launch a tear gas grenade.” He slipped a small auxiliary sight over the front sight, slid back the bolt, inserted a special blank cartridge in the breech, and slipped a dummy grenade over the muzzle. Line It Up and . . . Pow. “That’s all there is to it. The rings cut in the flash hider serve as a gas seal, so you don’t need the usual launching attachment

on the muzzle. There are several holes in the auxiliary front sight, each marked with a range. Just pick the hole, look through it, line the nose of the grenade up with your target, and pow. . . . “With a little practice, a man can easily hit the center of a 4-ft. square at several hundred yards. We also have an armor-piercing grenade,” he grinned, “that will go through 2 ft. of steel-reinforced concrete.”

Occasionally, police are faced with a situation where a desperate fugitive holes up in a protected position and shoots it out. In a case like this, getting close enough for an effective shot means exposing an officer to deadly fire. This is when the call goes out for a police sharpshooter armed with a high-power, scope-sighted rifle.

“Here’s another application that our rifle is tailor-made for,” said Murphy, as he slipped a small telescopic sight out of its case. “The single screw mount on the scope not only means quick mounting, but keeps it accurately sighted in, no matter how often it’s taken off and refitted.” He flicked the fire selector to SEMI, converting the rifle to a single shot auto-loader, and proceeded to plant 20 shots so close together that the holes in the target, a hundred yards downrange, could be covered with one hand.

Knockdown Punch. While we were inspecting the well-perforated piece of paper, he added: “Another advantage is that with the ultra-high velocity, bullets don’t ricochet dangerously. They disintegrate on impact.”

“That’s all very nice,” remarked one of the instructors, “but that’s a mighty small cartridge. Only a .22-caliber with a lot of power behind it. Has it got the knockdown power we need? Will it stop a man cold?”

“Yes,” someone else remarked, “what about penetration? More than one officer has lost his life because the gun he was using didn’t do the job.”

“What about a moving car?” another instructor asked. “Do these little cartridges have the punch to penetrate? To stop it? After all, part of that light recoil is due to the small cartridge the gun fires.”

“Well,” said Murphy, “seeing is believing.” We’d all noticed the old car that had been towed out to a far corner of the range.

“Try that for size,” he said, as he handed the rifle to one of the officers. The instructor slapped in a loaded magazine, switched the fire selector to FULL AUTO, and let fly.

Empty brass poured from the ejection port like peanuts from a can. We could see little spurts of dust rising from the bunker behind the derelict automobile several hundred yards away. We all had a try, and, in a matter of minutes, had expended close to 300 rounds.

Car’s a Sieve. When we walked over to check the results, we found that the car now bore a striking resemblance to a sieve (Fig. 5). Where bullets had hit the door, they had done more than just penetrate. They had gone through the body paneling, window elevating mechanism, and inside metal work. Not only that, they had kept right on going and out through the opposite door. It was obvious that as a shelter or means of getaway, a car was no match for the AR-15.

“A lot of brains, time, and money went into the development of this little cartridge,” Murphy remarked, “and if we weren’t darn sure it would do the job, we wouldn’t use it.

“Like the rifle, the .223 cartridge represents a radical departure from the old theories of firearm design. It used to be a rule of thumb that the bigger a bullet was, the better it would flatten whomever it hit. We use a lightweight bullet, traveling at terrific speed, 3300 ft. per minute, and get our knockdown power from hydrostatic shock. When you drop a rock in the water, you get not only the splash where the rock hits, but shock ripples traveling out in all directions from the point of impact. When this little 55-grain bullet hits with a force of better than 1300 ft./lbs., and at that terrific speed, the shock power is fantastic.”

Shattering Shock. While he was talking, Murphy set up a pair of 1-gal. tins. One he filled with water, the other with gasoline.

“Another advantage to this cartridge,” he said, as we walked back to the firing line, “is that it shoots flat. A slow-moving, heavy bullet, like the .45, drops so fast that if you’re over 50 yards, away from your target, you might as well be throwing stones. You don’t know where you’re shooting. With the .223,

drop is so slight that a distance change from 50 to 200 yds. means you hit your man in the third shirt button from the top, instead of the second.”

“Now I’ll show you what hydrostatic shock does,” he said as he flicked off the rifle’s safety, and drew a bead on the first can. The AR-15 cracked, and the can disappeared momentarily in a geyser of spray (Fig. 6).

He shouldered theÂ» rifle again and let fly at the other can. It erupted in a cloud of flame (Fig. 2), “If you have to stop a getaway car,” he said, “shoot for the gas tank.”

Murphy now set up a 30-gal. oil drum and filled it with water. He handed the rifle to one of the instructors and told him to shoot at the lower half of the drum. The officer fired, and the drum flipped up into the air, its sides split and the bottom torn out.

No Cleaning Needed. For the final demonstration, Murphy set up a large concrete building block (Fig. 3) that had been packed with hardened mortar. A quick burst, and the block vanished in a cloud of dust and flying fragments.

“Three magazines (60 rounds),” Murphy commented as he packed the rifle back in its box, “will cut a large enough hole in a cement block wall for a man to crawl through.”

“Hey,” one of the officers asked, “aren’t you going to clean it?”

“Oh,” Murphy grinned as he snapped the box shut, “didn’t I tell you? The whole gun is non-corrosive, even under a salt water spray, and the lubricants are permanently fused into the metal. It’ll never need oil, and dirt can’t stick to any of the moving parts. Bury it in sand, dig it up, bang the butt on the ground once to clean it out, and it’ll work like a hundred-dollar watch.”

We all looked at each other, and I had the feeling we all were thinking the same thing: Like the Model T Ford, the tommy gun was the ultimate in its day, but the time had come to replace it with this super-weapon.